An Odyssey of a Bisexual Moslem 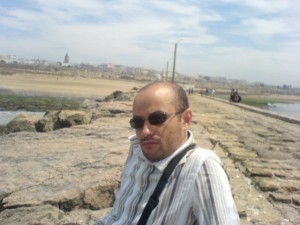 Religion and alternate sexuality have hardly been at peace, and it is this conflict that can lead to various psychological troubles and depression. Things become even more difficult if your religion or religious leaders vehemently regard it as a crime against God’s Will. How hard could it be for a gay/bisexual to accept himself and cope up with all this? These are some of the questions you would find an answer to in Kavafis’ Syndrome: An Odyssey of a Bisexual Moslem by Hicham Bouzid.

As the title suggests, Hicham Bouzid is a bisexual Muslim. He grew up in Morocco, but his internal conflict with his sexuality plunged him into depression and insomnia. He tried to forget about his “problem” by immersing himself into books and attending psychotherapy sessions. “With Islamic religious background, it is not easy to accept your sexuality since your whole life you are stuffed with stereotypes and you have to follow the rules. But when something in you does not accept the rules, there are so many reactions. It could be negative reaction or positive reaction; and can lead to suicide,” he says and reveals that he too had attempted suicide.

From Morroco he came to Germany with his sister, but the depression and denial did not go away. It was then that he took recourse to writing and his initial stint began by writing short stories and Italian poetry, ultimately leading to Kafavis’ Syndrome. The book was initially titled The Diary of a Homophobe Bisexual, but on the behest of his publisher, Bouzid renamed it to Kafavis’ Syndrome. “Kafavis was a straight poet and after reading his biography, I was quite touched. He was also a lover of Homer’s Odyssey. I always identify myself with this Odyssey, which is about how people can suffer before returning to Ithaca,” he says.

Describing the book as semi-autobiographical with allusions to homosexuality and Biblical Quranic stories, Bouzid says, “It is the story of how people, when they do not accept their sexuality, can just offer oneself for the cause and be really used in the cause…towards a God who does not accept their sexuality.  As a result they want to become like others and do something that will hide them .”

The book was published on May 10th and can be bought online at http://www.publishamerica.net/. Currently 35 yrs old and married, the 10 year journey from Morocco to Germany has surely been a really tough one for Bouzid, where he took recourse to drugs and was guilt ridden due to no fault of his own. But then, isn’t it the path we all cross in our lives before we realise how beautiful life is?