AMOUR – the first thing that strikes the mind when you think of this word is the heart-wrenchingly beautiful movie about growing old with a person whom you are deeply in love! For queer people, it is so rare to find someone sane and sorted to even date steadily in our country. What happens when someone queer wants to find a perfect pool of people who are open and eligible for dating? Where do they exactly go? We don’t live in Sex and The City fantasy land where you can just walk out your door or into a club and find yourself a person and fall in love and set off into sunset.

AMOUR is the new buzz in the town. It’s an online dating platform, primarily based on Facebook, and is open for all  queer people irrespective of their gender. Launched on June 4th, it has already received a good response among the queer community. It’s a very pleasant change since almost all the existing platforms are exclusive for gay men or very limitedly inclusive of other queer people, leading to major discontentment among various sections in the queer community.

If you are a gay man, you have several options like Planetromeo, Grindr, Scruff, etc,. But what about the other people from the pool of LBTIQA+ (Lesbian, Bisexual, Transgender, Intersex, Queer, Asexual and many more)? There are literally NO options! And YES they do matter, even if we (the whole queer community) don’t exist in the psyche of mainstream Indians.

Karan, the admin of Amour says, “When we had a deeper discussion with community members we realized that we need to have a group for all the LGBTIQA+ looking for partners since existing groups seem to cater to gay men only. It’s a mainly a dating platform where people can choose their partner(s) with terms of their own for the relationship.” 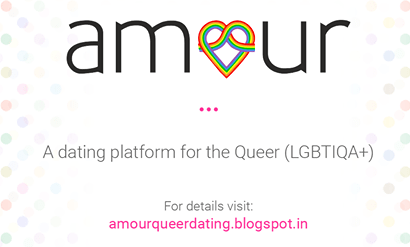 The Amour Team has worked for almost 2 months on the concept before launching various aspects like the contents of Google form and the other design contents. Amour is not your regular kind of platform where one goes to find people for hook ups, since there are already a lot of other options available for that. They actually wanted to create a platform where anyone can want anything as long as it does not violate any guidelines of the group. The Guidelines have been set after a lot of inputs from some senior members of the community like Vinay Chandran, Ramki and several others from lesbian, transgender and other groups of the community as well.

Usually in an open space where everyone is allowed, there are several factors to be considered like stereotyping, ego clashes, trans-phobia , name calling and body shaming. When asked about this, the admin says, “We also are trying to make this space void of body shaming or shaming of effeminate, trans or other marginalized members. We are adopting a policy to remove profiles with such offensive content. We do some basic verification of profiles before adding them to the group to make the group more secure.”

The Amour form is available in multiple languages too, which goes with their ideology of being inclusive. “The idea of getting the forms out in regional languages is that it will bring in more people and it’s much needed. Eventually, I feel it would be helpful to women and peeps who are non-binary and especially from smaller cities,” says Deepti, who is the moderator for Chennai.

This group is meant not just to find dates but also to create platonic relationships which would help a lot of community members to overcome their reservations about other groups and trans-phobia. It is one of the safe platforms for anyone to express what they are looking for and get a chance to find it, regardless of their sex, sexuality, and preference. The team consists not juts of youngsters, but also professionals from various fields and places, giving it the strength to be an all inclusive group and setting it apart from other available platforms.

As the number of profiles increase everyday in Amour, it is definitely going to help in connecting people from different strata of the Queer community and improve the inclusive quotient of the community, along with helping them find long term partner(s) and friends. At the least it will help us understand each other and what it really means to be open-minded.

You can check out their detailed FAQ on Amour’s site, or message them on their Facebook Page

(Featured Image for representation purposes only)