No Pride For Russia 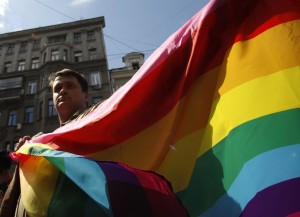 No Pride for Russia

The court at St. Petersburg upheld a ban on gay pride events. Are rights in Russia deteriorating? Tanika Godbole gives an account of the recent crackdown on LGBT supporters in Russia

“Hell’s teeth, something must be done to stop these fantastical monsters. Will talking about Tchaikovsky be banned?” -Stephen Fry, British actor and comedian on Russia’s ban on homosexual propaganda in March 2012.

Seven years ago, when two men in Russia got married at a church, the priest got defrocked and the marriage annulled. Gay marriage remains illegal in Russia to this day. However, on the 17th of August 2012, a city court in Russia upheld a ban on gay pride event for the next 100 years, infuriating LGBT activists and supporters in Russia and throughout the world. Nikolay Alexeyev, one of Russia’s best known gay rights activist took this ban to court, hoping to achieve the freedom to organize and participate in gay pride events. (He then took the case to the European Court in Strasbourg which charged the Russian Court for discriminating against Alexeyev on the basis of sexual orientation.) For a country that decriminalized homosexual relationships in 1993, this is a move in the wrong direction. Although homosexuality and homosexual relationships are by themselves legal, being publicly open about it is not. President Putin’s main botheration with gay rights seems to be that it goes against traditional family values. That Putin does not like change is obvious from his clutch on the regime; and change from the traditional form of relationships is something he doesn’t seem to fathom. Reportedly, he believes that it is against nature since same-sex couples cannot produce children. This is apparently an ultimate reality and he is “ready to be patient.”

In March 2012, the city of St Petersburg passed a law banning “public actions aimed at propaganda of sodomy, lesbianism, bisexuality, [and] transgenderism amongst minors”. According to Russian regional media; talks of a similar ban have been in process at Moscow. Russia has much bigger problems to face; yet she has taken the time out to oppose and ban homosexuality and LGBT “propaganda”. This law has been criticized internationally as well as in Russia. Apart from the acknowledgement of individual freedom, what the law lacks is clarity. The human rights ombudsman of Russia, Vladimir Lukin, himself called the law ‘strange’. However, the human rights ombudsman has taken no action since he believes that publicity of sexual preference is not socially acceptable. This law took its first victims when the police at St. Petersburg arrested two activists on the 5th of April, who were holding placards saying ‘It’s normal to be gay’. The spread of this law would inevitably result in people believing that homosexuality is something unnatural. The law seems to make the assumption that homosexuality is learned behaviour and there is no proof for it being a natural sexual orientation (apart from thousands of personal testimonials).

Ninety-six percent of the Russian populace believe that they have never been subject to gay propaganda of any sort except by the media, according to VTsIOM, a state-run pollster. Surprisingly enough, eighty-six percent of the participants of this poll felt the ban on homosexual propaganda was welcome. Russia’s two dominant religions – orthodox Christianity and Islam both frown upon homosexual relations. Over 80% of the population belong to either of these groups. Forty-seven percent of Russians believe that homosexuality is a behaviour acquired under the influence of media. That homosexuality is an evil outcome of the influence of the west is not exactly an uncommon belief. Yet several media channels of Russia have been accused of acting as a voice against homosexuality. Putin may have had his bit of denunciation on the international scene for several issues, but his stance on homosexual relations has caused great outrage in the international human rights community. Amnesty International and Human Rights Watch have both severely condemned this action.

The dangers of a badly composed anti-gay law are much worse. No clear definition of the word ‘propaganda’ gives the

authorities the right to potentially interpret any action as propaganda and arrest anyone who violates the law. Apart from international criticism; Putin’s agenda faces some pretty tough competition from Pussy Riot, the female punk band. Pussy Riot stormed into the scene in November 2011 with their guerrilla performances, including the ones at the Red Square and Moscow’s Christ the Saviour Cathedral, has made them a menace for the Kremlin. A strong voice against gender and supporter of LGBT rights, members of Pussy Riot were arrested in February this year. LGBT rights protests in Russia added another demand: the release of Pussy Riot. Amidst protests and demonstrations, they were released, only to be arrested again and sentenced for two years on charges of hooliganism on 17th August, 2012. While many protested against their arrest, Putin and the Orthodox Church took a patronizing stance, urging the judiciary to not be “too harsh” on the girls. The spunky girl band’s bold performances have made them a voice for LGBT and women’s rights and the freedom of expression. They have inspired several Russian as well as international supporters. Pussy Riot’s star studded fan list includes names like Björk, Red Hot Chilli Peppers, Green Day and Madonna.

“Tonight, and every night, I like to live dangerously.” This is what Madonna said as she showed her support for LGBT rights and Russian female punk band Pussy Riot at her performance this August at St. Petersburg. And dangerously she lives. Madonna is now being sued by a Russian anti-gay rights organisation for $10 million, who claim that she insulted their feelings by speaking up against gay rights at her concert. The vice-president of Russia, Dmitry Rogozin condemned her moral lecturing on twitter, asking her to “Either take off your cross, or put on your knickers.” Ironically, some gay rights organisations have also criticized Madonna’s actions, saying that she should have abandoned the tour rather than come and speak against it.

An end to the struggle is nowhere in sight for Russia’s LGBT community. Revolutionaries like the Pussy Riot will keep coming along, as long as rulers who refuse to accept reality inhabit the Kremlin.