Accused of Enjoying the Best of Both Worlds, But Respected by None : The Plight of Bisexual People

With a long-running and now fairly constant debate going on about the LGBT rights all across the world, there lies a segment of people that is often ignored, discriminated against and even exploited. Called an “invisible majority” by researchers, turns out, the ‘B’ for Bisexual in the LGBTQ+ umbrella is vastly misunderstood. A plethora of myths and stereotypes have led the Bi community to a vacuum of sorts, alienated from both the fronts- the straight as well as the LGBTQ+ community.

Slut-shaming bisexual people is a real phenomenon and occurs at a large scale. It is simply assumed that since the members of the Bi community can get sexually attracted to both men and women, they’re naturally the ‘whores’ of the group, inherently polyamorous with a threesome being their ultimate sexual fantasy. Come to think of it, it sounds like a Bi version of the “I can’t change in a locker room with gay men around me” argument most straight males use. Just because someone is bisexual does not imply that they will be attracted to anything that walks. Same goes for the prejudice held against Bi people, claiming that they are more likely to cheat. Something as multidimensional as loyalty is embedded deep in one’s psyche and depends on a range of different contexts. Being bisexual is, in no way, related to being a cheater or not. Yes, it does open up a lot more options than straight or homosexual people might have but that’s it. Bisexuals are as open to commitment and emotionally fulfilling relationships as anyone else.

If bisexuals are not defamed for being immoral, they are often highly sexualized, especially in the case of women. It is a very common notion among a lot of people that all women are bisexual. Add on to this the magnanimous amount of pornography that fetishizes lesbianism/threesomes and you get another perfectly baseless stereotype about both- the bisexuals as well as women.

Coming to the not-so-inclusive LGBTQ+ community, a lot of homosexual people often use bisexuality as a means to transition and come out of the metaphorical closet. While experimenting with and making the concept a stepping stone is completely fine, it often leads to the false assumption that bisexuality is merely a grey area between the labels of straight and homosexual when in reality, it is a wholly different dimension altogether. For a huge amount of people out there, bisexuality is, in fact, a permanent aspect of their identities and not just a part of the coming-out process. 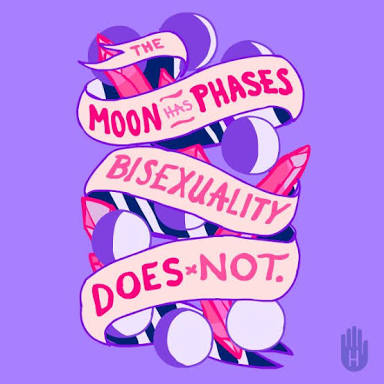 Even in today’s age and the persistence with which LGBT rights are being fought for, biphobia continues to prevail, within the periphery of the LGBTQ+ community itself. Despite bisexuals constituting a significant portion of the society, they’re shunned and branded as the promiscuous, indecisive and sluttish ones. We need to realize that we cannot pass a verdict and put a label on anyone in the beautiful fluid spectrum human sexuality is. All we can and should do is treat people right and spread as much happiness as possible. At this point, the world could really do with some plain, undiluted love.

Get in Touch
Manasvi Singh Chauhan
I like pandas, poetry and films. I (try to) write. Grey's Anatomy is my favorite sitcom.
As of now, I spend my time working on my debut short film and making plans of world domination.

Get in Touch
Latest posts by Manasvi Singh Chauhan (see all)