International Day Against Homophobia, Transphobia and Bi-Phobia (IDAHOBiT) marks violence against lesbian, bisexual, gay and transgender people. Violence against LGBT people is widespread- physical, mental, social, economical . Sometimes these kinds of violence are overtly manifested but sometimes there are micro aggressions and they are not easily recognisable.

To elaborate, American Centre with Humsafar Trust, Harmless Hugs and other groups organised an event to mark IDAHOBiT on 20th of May at American Centre. In their invite, which was sent to everyone, they asked everyone to get their “VALID PHOTO ID”. Someone who works at Humsafar Trust asked me to register for the event using my “Real Name”. I posted it on Facebook about the dysphoria associated with “real names” and some of us do not have legal document of the chosen name. I was upset. I did not want to use my ID for registration or to share it with anyone from Humsafar or American Centre for an event organised for LGBT issue, as it had me registered as a ‘female’ which is very dysphoric for me. We reached out to Humsafar and they said that it’s for security reasons. After that they changed their Facebook invite and said that people who do not have legal gender document, they can come and meet Humsafar representative who will assist them in getting to American Centre.  I have issues with this kind of an approach. They are listed below: 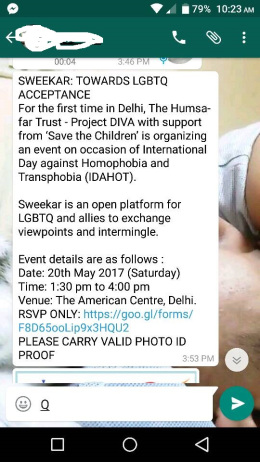 A snapshot of the Whatsapp invite of the event

On the contrary, they should have had a system where everyone who wants to come to the event could have registered and that registration should have been the ticket to enter American Centre. That could have been equal for everyone and everyone needed to have to show tickets at the registration desk, rather than asking only certain trans-people to have special arrangements. Dysphoria is real and these micro aggressions are violent.