More than 12 hours after we reported about a joke equating gays and rapist and glorifying rape being shared over social media, Bewakoof.com took down the post from their facebook page and tendered an apology.

After a cricket match between Royal Challengers Bangalore and Pune Warriors yesterday, in which Chris Gayle’s batting left everyone enchanted, a joke comparing gays with rapist and Chris Gayle with a serial rapist started doing the rounds of social media and was shared by Bewakoof.com on its Facebook page. The post went on to receive 18000 likes and over 15000 shares. Many people, both from the LGBT community and otherwise, found the post offensive and started reporting and posting against it too. Harrish Iyer, a gay rights activist, called up the admins of the page who admitted their mistake and agreed to remove it and apologise for it.

The apology posted on Facebook reads: “We have deleted the Gayle Gay-Rape gag/pic… It was never meant to be offensive but i agree that we crossed the line with that joke.
At the time i got carried away from all the Gayle jokes/gags and decided to post it. It was meant as a joke on Gayle only.. had no initial intention to address gays as rapists or to make a sick rape joke. Perhaps that joke could have been framed in a better way and could have been a lot less offensive if some of the words were replaced properly.
We have deleted that pic after it getting 18 thousand likes and 15 thousand shares… Im sorry for letting it go that viral in the first place.

Rape is a very sensitive issue in our country and rape jokes should not be entertained. You are free to report such pics to fb officials..

P.S – We are not against Gays. and also Chris Gayle if you are reading this, no offense bro. :p (sic)

The apology has been appreciated by everyone on their page and users have also commended the admins for removing it. Interestingly, users who had reported the post to Facebook had instead got a message from the social networking giant that said that the post doesn’t violate their terms and conditions. Many who reported the post received this reply, “Thanks for your report. We reviewed the photo you reported, but found it doesn’t violate Facebook’s Community Standard on hate speech, which includes posts or photos that attack a person based on their race, ethnicity, national origin, religion, sex, gender, sexual orientation, disability, or medical condition.” 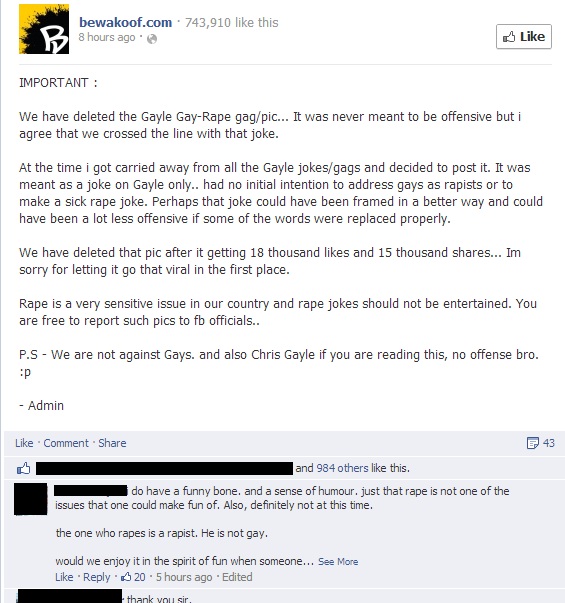 The apology posted on Bewakoof.com page