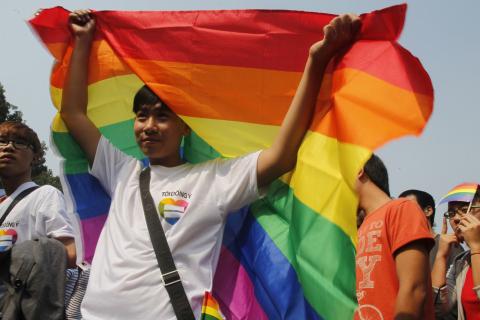 Vietnam now has marked its name among the countries where same-sex weddings can be perfromed without harrasment, though it has fell short of legalising same-sex marriages. From November 12, the country will hold no grudges against lesbian and gay couples who will intend to tie knot, moreover, the local authorities are now assigned to protect the interests of the community member. The decision by the state comes after the furor caused in 2012 when local authorities intervened in two same sex marriages and later put fine on them. According to Decree No. 110/2013/ND-CP which took effect on November 12, marriage between people of the same sex has been rejected from the banned cases of marriage. It means that the organization of wedding parties between people of the same sex (without marriage registration) will not be illegal anymore and they will not have to pay fine.

Vietnam has now joined Taiwan, another south-east Asian nation to in recognising gay marriages. The Vietnamese government came ahead to safeguard the legitimate interest of the same sex couple. Now their citizens can hold, organize and participate in such marriages in public. The concerned society thinks the world will applaud this decision of Vietnam and will eventually change the mindset of the countries criminalizing such union.