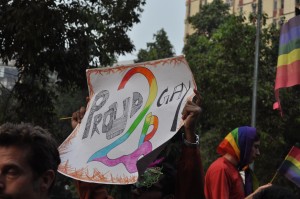 Patna has become the latest entrant to the list of Indian cities holding a gay pride parade. According to a report published in the Hindi daily Dainik Bhaskar, a gay pride parade was held in the city on 29th June. Holding banners and placards in their hands and dancing to the tunes of various songs, a small group of  20 people  marched from Gandhi Maidan  to The Dak Bungalow Crossing.

The parade was organized by a group called Dostana Safar . The orgainsers said that the main motive of the parade was to let society know about the issues that the LGBT community faces and also mark their presence in the society. The organizers are hopeful that the participation will increase in the coming years