The Embassy of Spain in India commemorated the International Day Against Homophobia, Transphobia and Biphobia by organizing a panel discussion and a movie screening at Instituto Cervantes in Delhi. The topic of the panel was ‘The Psycho-Social Impact of Living a Closeted Life’. The panelists included Amrita Sarkar – a trans activist working with Solidarity and Action Against The HIV Infection in India (SAATHII); Navdeep, founder of BiCollective Delhi; Kritagya, author of the book Coming Out.. Scribblings from the Heart; Rituparna Borah, co-director of Nazariya; and Shilpi Bannerjee, a psychologist. The discussion was moderated by Gaylaxy editor-in-chief Sukhdeep Singh. 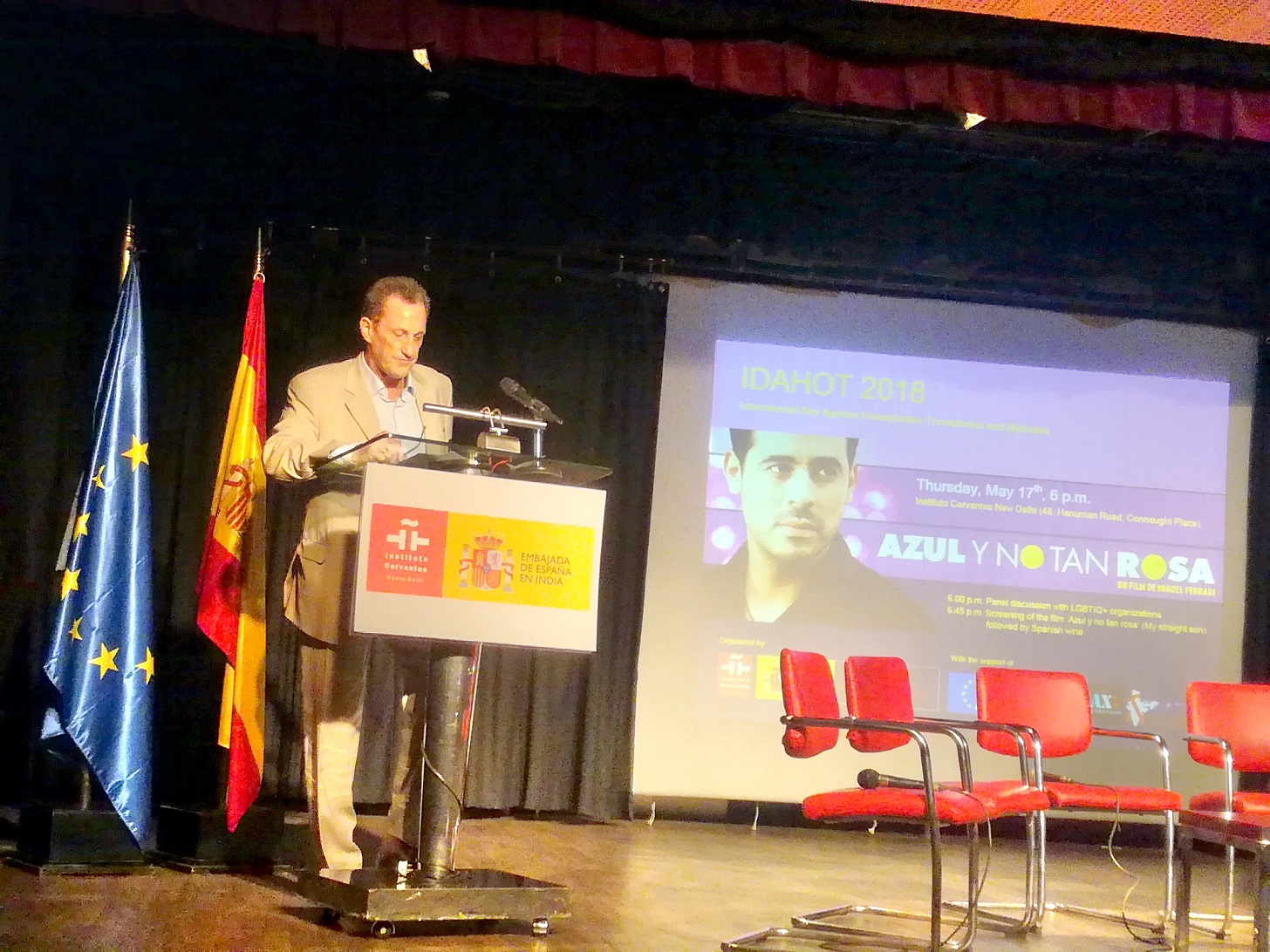 The event began with the Deputy Head of Mission of Spain talking about Spain’s effort in promoting LGBTQI rights in the country and abroad. This was followed by a panel discussion. The discussion began with Sukhdeep asking Kritagya to share his experience of being a gay married man, the circumstances that led to his marriage and how he was dealing with the situation now. Kritagya talked about how he was under severe depression following his marriage, and how after his doctor’s advise, he decided to come out to his wife and child. He also spoke about the struggle of his family to accept the reality, and their eventual support to him. He mentioned how his book talks about this journey of his, and that through his book, he hopes to reach out to other people who might be facing a similar situation. Navdeep shared the biphobia that one encounters daily, both within the community and outside of it and how bisexual people are invisibilised and the steps one could take to tackle this biphobia. Amrita spoke about the struggles that a trans person has to undergo every day, including in terms of access to healthcare and other services, and why the trans community is opposing the current Transgender Rights. Rituparna said that queer women not only find it difficult to find space in the mainstream society, but also struggle to access queer spaces. She narrated an incident of how she and her friends were groped by gay men at a pre-pride party in Delhi, and how such incidents alienate queer women further. Shilpi expressed the importance of building effective peer support and the need for allies to play a more committed role in addressing intolerance in the wider community so as to combat the isolation, guilt and shame experienced by LGBTQIA community due to the feeling of being seen as outsiders within the very society to which they belong. 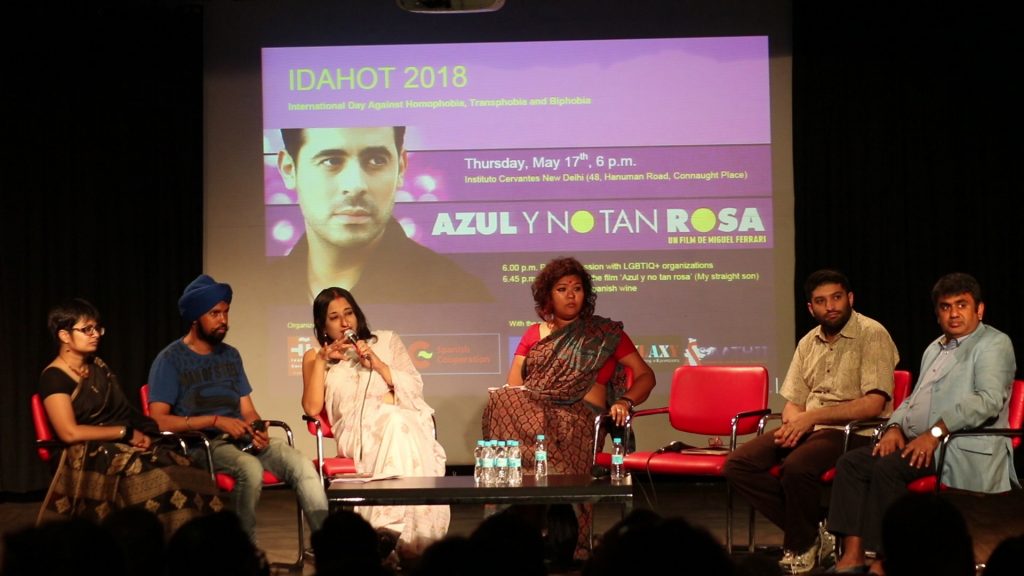 The panel discussion was followed by screening of multi-awarded Spanish-Venezuelan film ‘Azul y No Tan Rosa’ (My Straight Son). The movie tells the story of Diego, a young and successful photographer who lives in the glamorous world of fashion, shallowness and excess. A tragic accident turns his world around; his partner is now in a coma. Unexpectedly, and right at this terrible time, Diego must take care of his son, Armando. Now, both of them have to adapt to each other; Armando to the unknown, homosexual world of his father, and Diego to the closed attitude of his teenage son.

The event was supported by EU delegation to India. In a press release, the European Union reaffirmed its commitment to combat all forms of discrimination and hate crime, on the grounds of sexual orientation, gender identity and sex characteristics, and to continue to actively promote and protect the human rights of lesbian, gay, bisexual, transgender and intersex (LGBTI) persons.

Other Foreign Missions in Delhi too celebrated IDAHOBIT by lighting their embassies in the iconic colours of the LGBTI rainbow flag, hoisting the rainbow flag on the embassies’ flagpoles, screening movies as well as social media campaigns using the hashtags #MyCountry4Equality and #IDAHOT2018. In total, thirty four countries came together to affirm their countries support for LGBTQ rights and released a joint statement to reaffirm their “countries’ strong commitment to promoting the universality of human rights and to ensuring that everyone, regardless of their gender identity or sexual orientation, enjoys these rights without discrimination.” 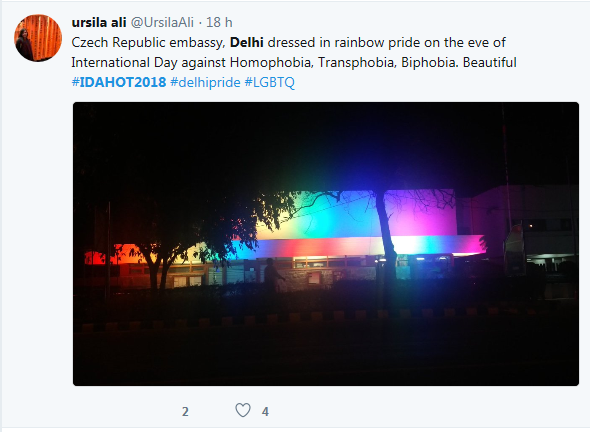 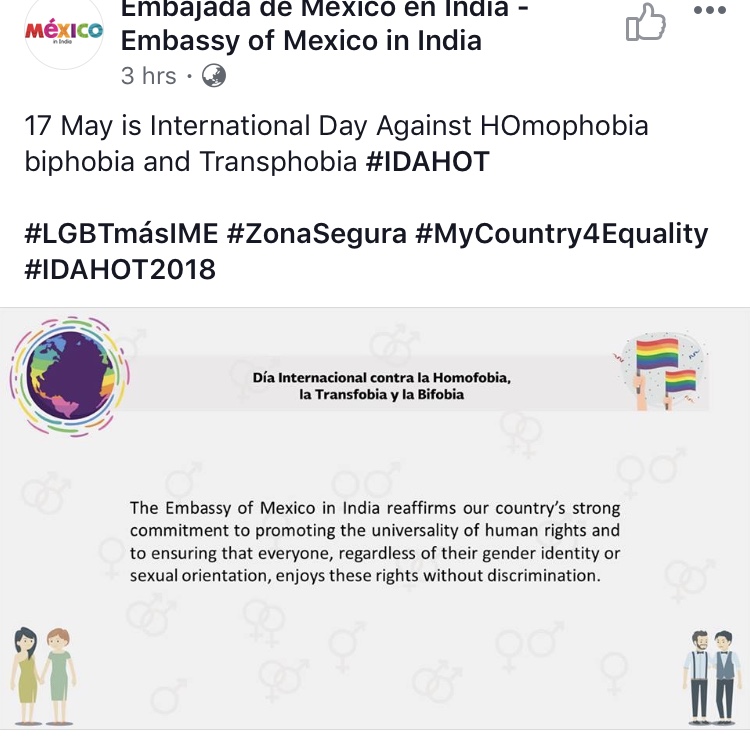 Gaylaxy released a video on What is IDAHOTB, that was appreciated by all.