At 42, dreams gets busy more than wet. And during the most recent one, my ex-boyfriend from 5 years ago auditioned for another chance. Just as I got thinking if dream stalking was a result of one of us not getting over the other or softening our stand, I received a text message from 24-year old man who I met at a party last October. This ia s probably the fifth candidate in this age group (twenties) that I’ve said no to.

On that rainy October night he came up to me at the club and introduced himself as a friend of a common acquaintance. Sometimes it is missed connections that enable new connections. We exchanged some basic courtesies and information as I began to carefully frame my questions to read more into his handshake. Soon he invited me to join him in the dance floor.

Like men his age, he wasn’t ready to accept my excuse (clumsy feet and poor motor nerve coordination) and remained steadfast to teach me a few quick and easy steps and join him on the floor.

I was impressed by his simple lessons and was surprised to see his moves and taken aback to see men queuing up to dance with him. Now I knew he was the most popular man in the room and wasn’t it quite an honor for me to get lessons from him?

On my way home that night, my mind began processing mutual insecurities we projected on each other. I remembered how he followed me like a house cat every time I exited the dance floor. Moreover, I didn’t want to pursue a man who was popular and had a long queue of men waiting to dance with him.

The next morning when I woke up, I noticed a few messages queuing up for my attention similar to the men at the dance floor last night. Just as I began to read and respond to them, I received a call from him asking if I were free to meet up for a coffee. I delayed our meeting and in the meanwhile I reflected upon my love, loss and redemption experiences from my 20s and 30s and began to question the mind of men in 20s.

So, how does it feel to feature on the list of the 24-year old?

My boy friend was 24 and I was 28 when we first met each other. Despite living in our respective homes in the same city we texted each other from the minute we arose till we retired. There was a time he came to my office and outed me to my colleague because I would not pick his call. Sometimes, we fought wars over 160 characters (SMS) and later realized how we ended up making the mobile companies richer.

14 years later, I again get on the list of a 24-year old. Though, I have a voice and message plan today, but it hardly gets used. Despite subscribing to the minimum plan, the provider continues to make money from my unused plan. When you get to 40s, you have much less to say and more to think. On one of our calls, I enquired about his future plans, professional aspirations, etc. and motivated him to switch jobs or pursue master degree. I even rewrote his resume and forwarded to a friend in the same industry. Honestly, I was just trying to repay his kindness on the dance floor.

Did we run out of topics or did another man catch his fancy at another club? Don’t know why, but our messages and calls eventually stopped. Thinking about composite numbers, I recalled its other definition; it is a positive integer and has at least one divisor other than 1 and itself.

And recently, a year after I met this 24-year old, he called me up and interrupted my thoughts. Was it an anniversary wish? Nah! He told me that he had an admit card from a University in France and had to leave the country in 3 weeks. With great joy, I invited him for a drink and dinner; he said he will get back and never did.

As much as sex can be a relationship glue, lack of it can also make people drift away and fall apart. My second relationship during my 30s (across two cities) is a great example for what happens when sex cease to exist in a relationship. And now I could see shades of that again after this phone call.

At 24, sex is undefined and can be with anyone and everyone and need not be confined to a relationship. But at 42, an age when wet dreams are hard to come by; more time is spent trying to define every relationship and giving it the appropriate respect or burial.

Before I went back to thinking about my dream stalker, I wandered thinking about 24 and 42. Apart from being even and composite, they are both palindromic numbers and get to stay in each other’s life only for a year. And none of the other four guys before him who promised to stay in touch ever did and I don’t hold it against them.

I smirked…it is time to bring on the next number in the palindromic series. And as I get ready for my 43, wouldn’t 34 be more appropriate? 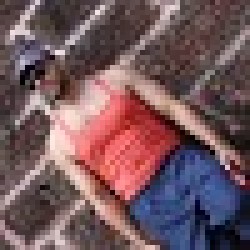 Chandra D is a Marketing Communications professional based out of Chennai.