Protests are a hallmark of an active democracy; of all democracies. But something that can be unique to India is a celebration of its diversity. This is what I witnessed at the Delhi Queer Pride Parade. It was a gathering of a large group of people with a common cause, to fight discrimination. But it wasn’t a protest, it was a celebration.

Queer pride parades happen all over the world, but what was unique about this was the coming together of people from many other spheres; the Dalits, the Adivasis, women, and persons with disability, among other groups. It was a beginning at that, and even though people from other groups or their supporters didn’t make it in the numbers you’d like, the challenges they face had a voice. This needs to be allowed to grow and become something that can absorb the many voices being raised against the growing forms of oppression in our country.

What was very unique about the whole setting was that even though there was a sense of revolt, there weren’t any signs of aggression or frustration; it was a very happy occasion and could easily have been mistaken for an Indian Baraat. There was a dhol, and people were singing and dancing around it. Someone even brought a hula hoop. The discrimination that LGBT groups face is very real, and I think it’s easy to imagine that in the current times, there wouldn’t be even one among them who hasn’t cried over the hatred and discrimination they are subjected to. To still find them cheerful and more importantly, proud, is something that shows their strength. 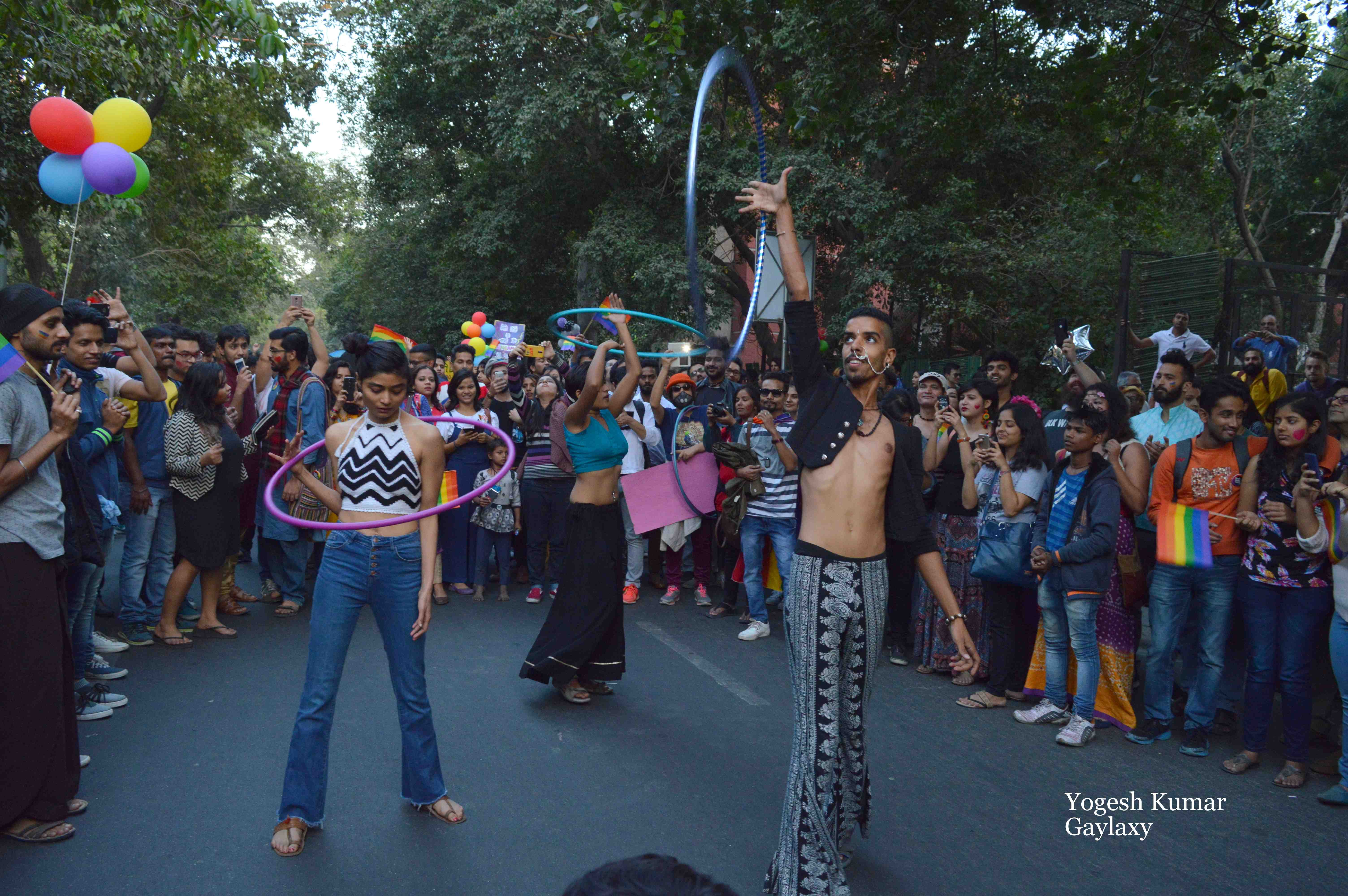 There were many moments that would remain unforgettable for me. I finally got to sneak in an “Azaadi” in the ‘Azaadi Slogan’ made famous by the JNU movement.

“Sex karne ki.. Azaadi. Sex na karne ki.. Azaadi” (Freedom to have sex, Freedom to not have sex). This particular chant stood out for me as it marked a sure transition from essentially LGBT issues to other relevant issues of today.

Besides voicing support for LGBT freedom, it also brought into focus issues like marital rape and highlighted the importance of consent. Many other versions focussed on a spectrum of issues faced by the various other minority groups. True to its Facebook event description, the walk was in support of the many parallel movements against the right-wing in the country and welcomed everyone. I witnessed first hand the true power of this chant; its fluidity. To be able to get absorbed into any protest, irrespective of its nature, and to turn into the voice that seeks freedom from the pertinent form of oppression; this makes its appeal universal and its effect unifying. Fun Fact – the chant did not originate from the JNU movement; its history and its tradition go further back (Check here).

The amalgamation of all these national issues into the LGBT pride parade is what I find uniquely Indian. I am not aware of something similar happening in other countries. People need to unite and support each other if any meaningful movement against the hateful campaigns of right-wing organizations is to be realized. 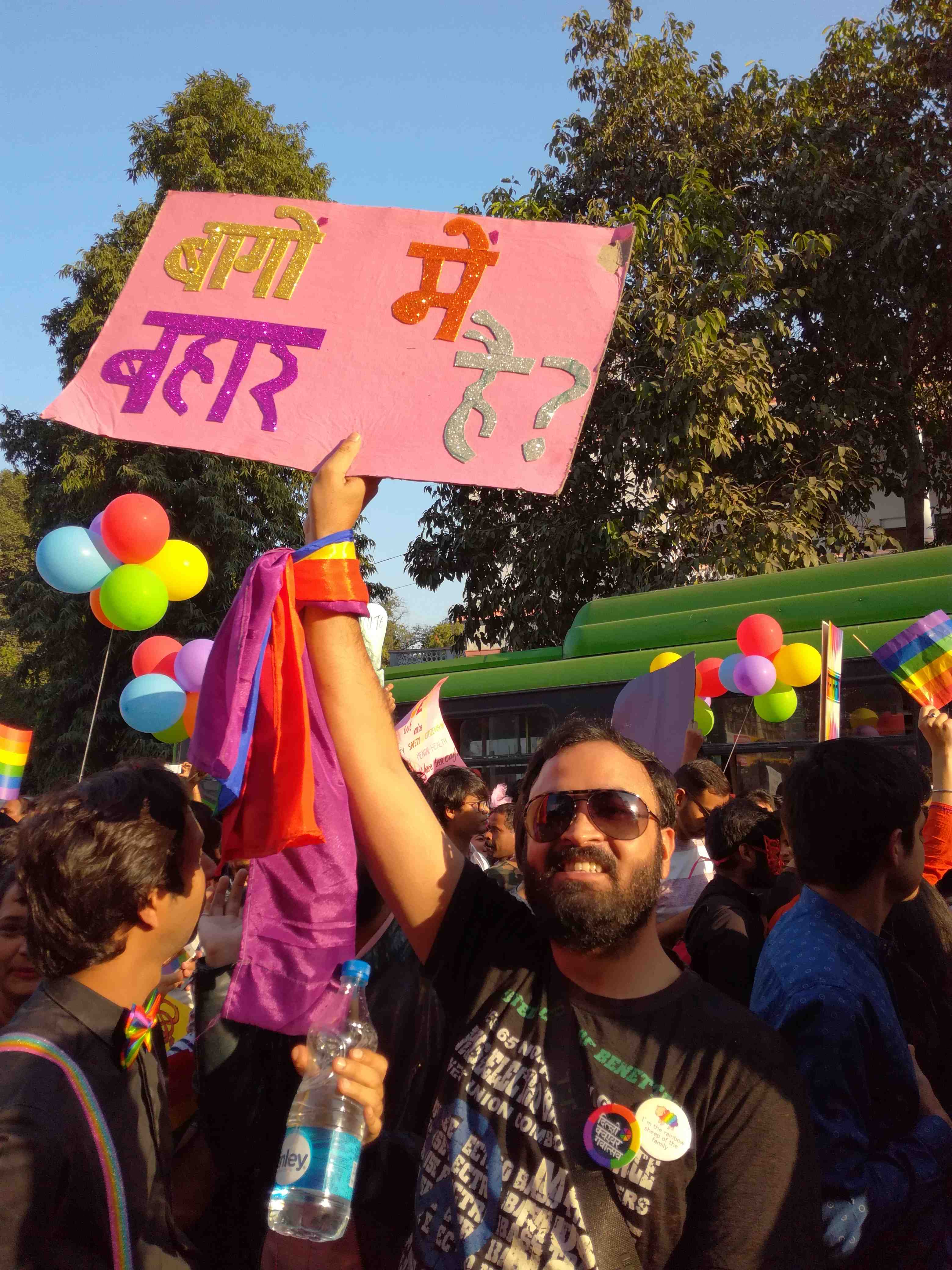 The cheeky placards with quirky messages added a unique voice to the parade. “Baagon me bahaar hai?” was something I chased down to click a pic of. “Baagon me bahaar hai, humko tumse pyaar hai!” was something I missed. I guess, I did find a bit of Ravish Kumar after all. The fact that these messages have found place on placards is a happy sign. It shows that people are coming together in questioning the government and are shunning its various agents that try to suppress its criticism. But by far, my favorite placard was the one about Fawad Khan and Ramdev, which was put together by Japleen Pasricha (and coined by Akhil Katyal) as I later found out through Facebook. Genius. 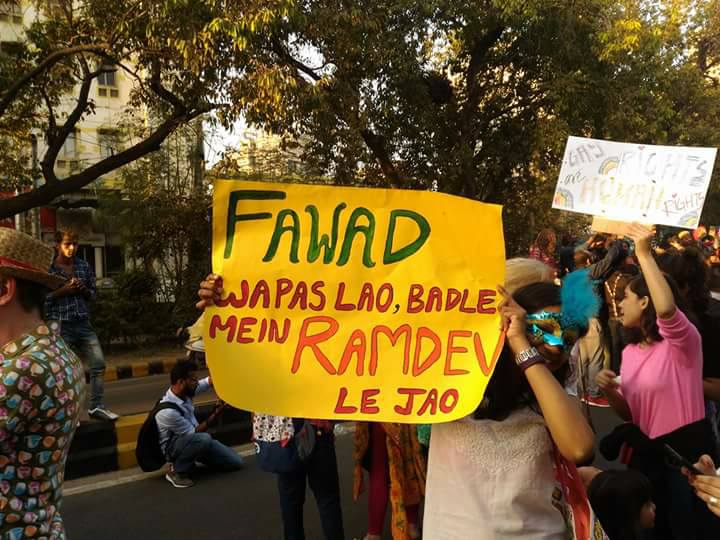 Lending support to the march were many little kids riding atop shoulders of their parents or siblings. Such experiences go a long way in nurturing a sense of acceptance, love and respect, and ought to leave a lasting impression. What was even wonderful was to spot a mother, in her sixties maybe, who was accompanying her twenty-something son. She seemed a little overwhelmed by everything but the fact that parents are making an effort to understand their children, in ways they probably never imagined, is something encouraging to find. There were also a couple of e-rickshaws for the differently abled, to ensure that no one feels left out and can march along.

I was also approached by a guy who wished me ‘Happy Pride’ and told me that his male friend found me attractive. I am not even sure how I reacted but I think I wished him back, thanked him and told him that I am not gay. I will try do better the next time; maybe I will go up to the guy and say the same, shake hands but also wish him a good life. I smiled about it later and I guess it’s one of those amusing situations you are bound to find yourself in a modern society. If anyone reading this can recommend a better way to act in such a situation, do share.

The march ended at Jantar Mantar, where a few performances had been organized. For me it has outgrown its significance as a historical monument and has now become a place where history is made. It is the centre of public protests in the capital. As it was getting late and it was my first time there, I wanted to soak in as much as I could. I decided to break away from the crowd and walk around a bit. There were about a dozen camps, each put up for a different cause. It was already dark and most of the tents stood empty. But it was easy to make out from the many posters and banners there, what it would have looked like during the day. The variety of protests, the kind of voices that were present, and the space different opinions enjoy here is true to the spirit of democracy. The fact that we don’t see media vans covering this 24×7 but can easily find YouTube videos ending up on the news is a trait that is against this very spirit. 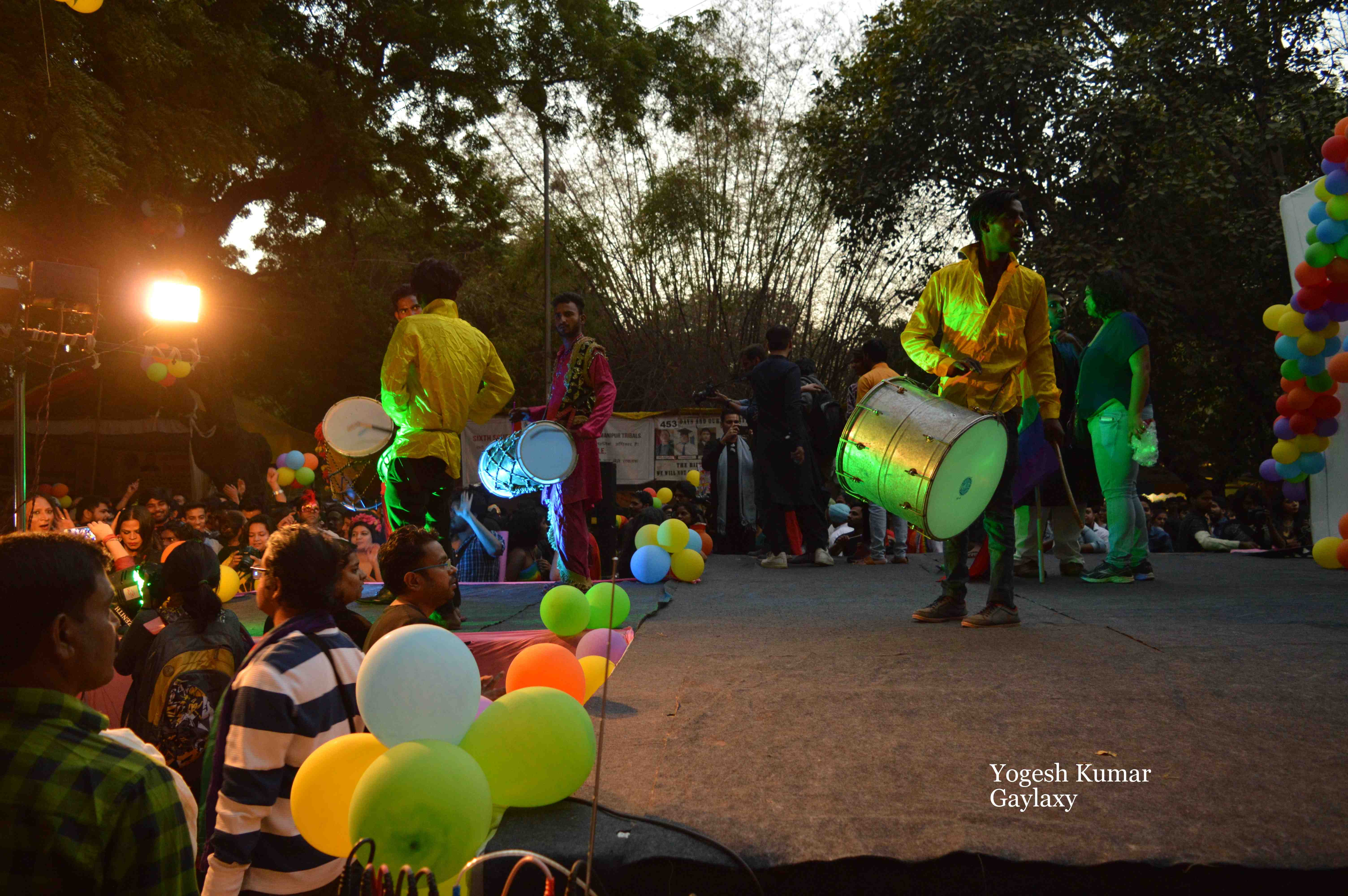 There were performances at  Jantar Mantar in the evening, where the pride ended. (Photo by: Yogesh Kumar)

The whole experience pulled me back into my childhood, when we learned about ‘Unity in Diversity’. I wonder if after rocking the examinations with our long answers on this ‘important’ topic, did we really learn how to give space to diverse opinions and lifestyles, did we really build upon it?

We learned about it quite early on but it was something that was never built on. Traditionally, the entire concept was unevenly skewed towards ‘diversity’ while falling short in its focus on ‘unity’. The language was designed to overwhelm us with numbers; hundreds of languages, a thousand religions, we were told, and as a result, the human lives behind the numbers got overlooked. We were too engrossed in the specifics that its spirit escaped us. Our textbooks were focussed on engineering a sense of pride towards our country’s unity. We were effectively blind folded to the challenges it faces, and were never motivated to resolve these issues. While various diverse groups were mentioned in our books, their unique problems were not. We grew up feeling proud of our legacy, but were never in a position to strengthen or sustain it. Unity and diversity effectively remained two separate concepts for us and we never learned how to create an effective synergy between them. Maybe our education wasn’t complete in this sense, and we still have unfinished homework at hand.

We were never told about the LGBT community at school. Maybe children are now. We were not taught how their issues are unique in the sense that unlike other minorities, they are widely dispersed in the society, often unable to find others like them. We never developed an understanding of their sexual lives and the challenges they face. We weren’t told anything. Yet, if one truly strived to uphold our country’s central character, its ‘Unity in Diversity’, this understanding would come naturally.

I find it to be democracy’s defeat when it is reduced to be a reflection of the majority voice. Its true ideal is to be a reflection of every voice. And its true achievement when the majority voice has space for the various minority voices. When everyone speaks up for everyone. That is the what we must strive for. If you wondered whether I am either L or G or B or T to be writing about LGBT issues, this is not happening. Everyone should be raising these issues.

Gaurav Saxena
Gaurav Saxena is a VLSI engineer from BIT, Mesra. He is currently trying to dedicate his life to engineering, friendships, reading more books and watching anime, while looking for ways to free the world of discrimination and hate. He occasionally writes a bit and then gets paranoid about it. He works at Apple during the day and surely struggles to write his bio.