The Journey Towards Decriminalisation of Homosexuality in Bhutan

Bhutan is a small Himalayan country located between two of the world’s most populated nations (India and China).  The country is well known for its pristine nature and philosophy of GNH. Majority of the people in the country practice Buddhism. The LGBTIQ community has recently started to come out in open to address various issues in the society. Previously, the community only focused on HIV and health but due to a wider and more diverse need for support, the community now openly advocates for social, legal and other issues of the community. Social acceptance towards the community is growing with increased advocacy but understanding of issues related to SOGIE is still not understood. A lot of ignorance towards the community is derived from stereotypical portrayal of community in popular media both within and neighboring countries. Social media has connected the communities together but it has also driven the community underground. Name calling and verbal abuse is the most common form of stigma faced by the community members. Degrading names such as Chakka, pholay molay, Hijra, is constantly used against the community. We believe advocacy is the best method to curb this ignorance and build acceptance for the community.

Bhutan is not a bad place to be a LGBTI person. With increased advocacy both by the community and the allies, acceptance is increasing. A lot has changed in terms of peoples’ perception towards the community and acceptance is evolving. The community utilizes various platforms such as television, radio, print media, social media to create visibility with a mission of ending ignorance, stereotypes and increasing the understanding and acceptance towards the community.  As of now 5 transgender women have legally changed their gender marking as female on all official documents and other identifications without having to undergo sex reassignment surgery.

The Sections 213 & 214 under the Penal Code of Bhutan directly does not criminalize homosexuality but it criminalizes consensual same-sex activity. The interpretation of the section is vague leaving the community confused until now. The section 213 of the 2004 Penal Code of Bhutan states, “A defendant shall be guilty of offence of unnatural sex, if the defendant engages in sodomy or any other sexual conduct that is against the order of the nature.” Section 214 states, “The offence of unnatural sex shall be pretty misdemeanor.” The law was there from 2004 when the Penal Code was drafted and adopted into law but the community has never been legally persecuted under this section. Over the years, the section has always been a threat and a reason for fear within the community. The law enforcing agency, Royal Bhutan Police, has also been very supportive towards the community.

We believe in building relationships and alliances, so Rainbow Bhutan did a lot of informal advocacy with various important government officials, media, parliamentarians and general population to seek understanding and create an enabling environment for the community. We have discussed about this method of approach towards our community work in various regional forums. The response we got were very mixed as some people thought that it would not work while others were just amused without respecting our country context. Rainbow Bhutan did not push aggressively towards repealing of the section 213 and 214 as that was not our strategy, but we continued to go about with our aim of creating visibility for the community through various platforms. What worked in the community’s favor was that the current government is well aware about the situation of the LGBT community in the country as some of them have worked with us previously in various capacities under HIV Programs. Finance Minister Namgay Tshering was the one who proposed to National Assembly to remove the two clauses as it was not included in the recommendations made by the Legal review team and the legislative committee for the Penal Code Amendment Bill 2019 of Bhutan.  He knew the community issues well as he has previously work with the community as the NACP programme officer under Ministry of Health. It was with his recommendation and written appeal that made this possible. He did mention about repealing of Section 377 in India and marriage equality in Taiwan as examples while interacting with media.

Section 213 and 214 was deliberated in the lower house (National Assembly) on 7thJune, 2019 for the first time since it was included in Penal Code of Bhutan. The Finance Minister moved the motion to remove the section and the legislative committee followed up and the section was recommended by the committee to be removed. The community also went to observe the deliberations and to promote visibility. During the deliberations one of the MPs also mentioned about the LGBTIQ community in regards to the section. It was an overwhelming feeling for the community as for the first time, the existence of community was acknowledged in such an important national forum, i.e., the National assembly. With majority of the parliamentarians voting to remove the section, the lower house decided to remove the section under the Penal Code Amendment Bill 2019. We take pride in ourselves for not having to fight with the government for our rights as we chose to work with the government, CSOs and various other agencies for our voices to be heard.

The Penal Code Amendment Bill 2019 is now forwarded to the National Council where it will be further deliberated during the coming winter session. Only after the endorsement of National Council, followed by Royal assent, will it become law. The immediate next step of Rainbow Bhutan and our allies is to do advocacy and lobby with National Council members to pass the bill.

Rainbow Bhutan will continue to do advocacy to end ignorance towards the community with the weapon of knowledge and information. We are also planning to get registered as a CSO in Bhutan and work for betterment of LGBTIQ community in Bhutan. This is the first crucial step as we have a long way to go to recognize true equality in the country. 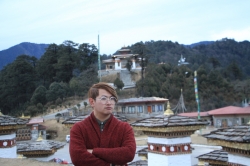 Pema Dorji is a board member and part of media team at Rainbow Bhutan, where Pema creates content for the Facebook page, makes videos, photoshoots, undertakes advocacy related activities. Pema has been working for the community since its inceptions and has participated in many national and regional activities to create visibility for LGBTIQ movement in the country.