Why Power Wranglers raise Hiccups for the LGBTQ+ Community

When we hear about rising instances of unregistered violence against LGBTQ+ persons of color like Tony McDade and many others in USA, we feel distressed, but it’s a distanced emotion. Our socio-political hypocrisy makes us turn a blind eye towards the harsh encounters faced by the members of the LGBTQ+ community in our own backyard. However, when taking in consideration the revised rendition of Civil Rights Act of 1964, as the Supreme Court proceeds in favor of equal treatment of LGBT individuals in the work place, it seems that US government (however unwillingly) has taken a monumental step towards the overseeing of health and welfare for the queer community. It makes one wonder when such endeavours will be taken in attendance by our own honourable and incredibly trustworthy government.

Even when the power holders claim to be supportive, they’re only wittingly manipulating the masses like aventriloquist artist with their dummy. Queerphobia has been growing with the speed of moonseeds ever since it was instigated by the British colonizers. Ironically, no one appears to shrug off this rampant sickness in the name of being ‘Aatma Nirbhar’ and anti colonial independent Indians. In Pre-colonial India, the self identity of LGBTQ individuals was assertive and encouraged. It can be traced back to the gender neutral avatar of Shiva as Ardhanarishvara and the trans masculine warrior from Mahabharata, Sikhandi. When asked, conservative queerphobes retort that the old scriptures of Bharat Purana and Vyasa’s Mahabharata, could have been conveniently tampered with to provide validation for the ‘illicit tendencies’. As a result, our generally well-meaning citizens become sceptic and skirt around conversations revolving around such topics.

You can read about homosexuality and gender autonomy illustrated in our ancient mythology from here and a book called Same-Sex Love In India from Ruth Vanita and Saleem Kidwai.

Systematic prejudice against non-heterosexuals and non-cisgender individuals remains pervasive throughout India due to lack of gender sensitization and negligible protection laws for the queer community. Illustratively, passing of patronizing (and quite frankly, inconsequential) legal measures like Trans 2019 Act and no adoption for same-sex couples goes unchecked. Undoubtedly, a seed sown by conservative political power holders reining their grotesque thinking unto our population. (Source 1)

Therefore, while there is a quite large number of LGBT Enthusiasts, the tipping scales still preside in the wrong hands. Granted, that these few voices speak up unafraid and harshly cognizant of the need for change. Due to their efforts, there has been an extensive outreach of our community. Certainly, while there’s a long path to liberation from our current ‘road to perdition’, the cohesive strength and the virtual reach of these people proves no less effective than a bull in a china shop.

Indeed, international celebrities are speaking up, as Justice Smith observes, “We chanted ‘Black Trans Lives Matter’, ‘Black Queer Lives Matter’, ‘All Black Lives Matter’. As a black queer man myself, I was disappointed to see certain people eager to say black lives matter, but hold their tongue when trans/queer was added.” The Pokemon actor goes on to denounce those who do not think of Tony McDade, a black trans man, as a victim too. Read his whole statement here. Likewise, intersex visionary @pidgejen, who voices out conciliation for intersex people of all colors, partakes:

Indian equal rights activists, however few in numbers, do not lag behind in sharing their own demands for ratification of the LGBTQ+ Community in India. These movers and shakers demonstrate that they will no longer let our community be pushovers. Their opinions and deeds are unanimously viable as the straw that stirs the drink. Consequently, words spoken by activists like Dr. Pragati Singh, the founder of Indian_Aces, are said in a comprehensive and sympathetic manner making it easier for the general population to understand asexuality without getting baffled. Furthermore, the tangible fearless actions made possible by the deeds of Sheethal Shyam, transgender activist-actor and member of state transgender justice board, need no precursor for introduction, the trans woman is exceptionally vicious in her demand for equal rights to the trans community with the help of others.

Moreover, despite their comparatively fewer shortcomings, the oldest political party of our nation; Congress shows room for reception and modern approach towards the LGBTQ+ Community. From the announcement of adding Harish Iyer, an openly gay politician, in their troops, it appears that relentless pressure and ethical change is infectious.

Conversely though, dominant patrilineal structuralism threatens to ruin the progress made by our community, as conservative queerphobic and Islamophobic traditionalists spread their backwards thinking in a devastatingly power-tripping manner. In a nation where politicians are massive influencers, the unmistakable stench of queerphobic prejudice permeates our entire premises. They are swiftly and deftly contaminating the cohesive unity of all castes, religious freedom, gender and sexual orientations. Not to do something as uncivilized as pointing fingers but this unveiling of truth was necessary:

In addition, aside from scheming conservative judiciary officials, certain social media influencers are singularly responsible for bad-mouthing and using verbal slangs in such a way that allows them the immunity to maim and bastardize the traits of LGBT community with deep rooted and falsely accredited, gender norms. Conversely though, youngsters choose to loyally overlook their queerphobia and prefer to rather stand aggressively in their support. Indubitably, the aforementioned repercussions will result in sparking a cultural screening that grants politicians and webstars with unhindered freedom of speech used in the worst conceivable way. 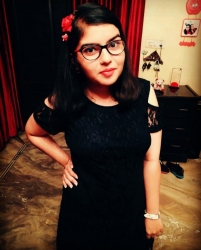 Aakshi Srivastava
There's a very thin line between good and evil, those who can respect the balance understand the necessity of change. An advocate of Social Realism, Feminism and LGBT+ Rights. Follow me on my Twitter account- @AakshiSrivasta1