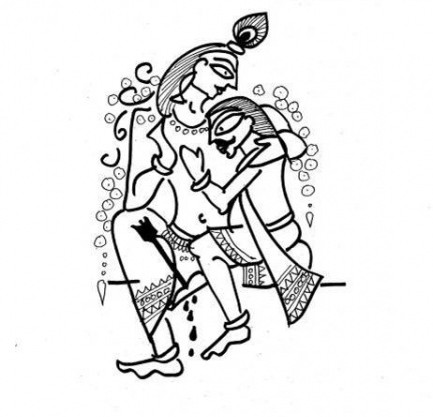 Bromance in India means yaarana, dostana. We saw it on full display when Jai and Veeru rode on bikes in the 1975 film Sholay. In 1990, journalist Ashok Row Kavi started the publication Bombay Dost. In 1999, Hoshang Merchant published an anthology of gay writing called Yaarana: Gay Writing From India. Karan Johar made Dostana in 2008. With that, the words yaarana and dostana became synonyms for gay. Many were upset that the purity of bromance was now contaminated by lust.

In lust, we want to exchange bodily fluids. In love, we rejoice and bloom in each other’s company. In networking, through a social contract, we benefit from other people’s property, or lack of it. The rules of society determine which of these three exchanges is allowed.

Lust is permitted between a man and a woman, but much of it is shaped by the social body: age, caste, class, religion, education. Love between a man and a woman is allowed, but only if it culminates in lust. Love without lust between a man and woman is seen as ludicrous. Love between two men or two women is acceptable as long as lust does not tinge it. Two men who love each other intensely as friends are called sakhas, two women who love each other are called sakhis. Sakha-bhaav (or bromance) is about homosociality—even homoeroticism—but not homosexuality. It is viewed as a pure relationship; lust is not allowed to creep in.

Yet, life is never so simple. It gets even more complicated when the physical body changes gender or is of indeterminate gender, or if there is dissonance between the mental body and the social body (I feel like a man but I have to dress as a woman). We love organizing life, but life refuses to stay organized.

Our problem with sex began when Buddhist monks started describing desire as Mara, the demon of desire whose defeat enabled Buddha to attain enlightenment. Until then he was Kama, god of love and lust, whose arrows aroused passion and creativity, who was celebrated in spring festivals by all. Kama, or Madan, had to be set aflame by Shiva’s third eye and reduced to ashes in rival Hindu story cycles. Beautiful Kama became the invisible Ananga after resurrection. With that, sex became a bad word unless it occurred in a particular socially defined framework.

So Ram could only be with Sita, and Shiva could only be with Parvati. But Krishna? He refused to stick to these conventions. He loved Radha and Rukmini and Satyabhama. He loved Radha, but never married her. He married Rukmini and Satyabhama, but did he really love them? He loved Draupadi, the common wife of his cousins, the Pandavas, but not quite in the same way as he loved Radha. And then, of course, there was his love for Arjuna, the two inseparable like the sages of yore Nara and Narayana, whom no nymph could separate. And in folk retellings of the Mahabharat, Krishna and Arjuna, both of whom have many wives, go on cross-dressing adventures, sometimes to trick villains and sometimes to seduce damsels. This love of Krishna for Arjuna, and Arjuna for Krishna, was sakha-bhaav—a deep friendship, as intense as any love, full of promises and expectations and obligations. Arjuna even travels back in time, turning into a woman so that he can participate in Krishna’s raas-leela, according to the Padma Purana. But suggest sex and the saffron brigade—who see sex as dirty—will get upset.

Saffron, the colour of monasticism in both Buddhism and Hinduism, is associated with celibacy. Sex is forbidden to monks, as it draws them away from the hermit’s path. It supposedly even gives them magical powers. As their influence grew, sex became a source of contamination unless performed in socially and ritually prescribed ways. Sex stopped being just indulgence (bhog), as sex manuals such as the Kamasutra presented it, and became a bad habit (vasana) in monastic traditions.

Rules were created to distinguish between good sex and bad sex, appropriate sex and inappropriate sex, dharma sex and adharma sex. The early patrons of Buddhism were courtesans, but eventually they were all encouraged to change their ways: not to simply be monogamously married, but to give up sex altogether and become nuns (as in the Tamil epic Manimekhalai).

This rejection of sex is very different, in principle, from the rejection of sex by the Roman Catholic church on the grounds of original sin, a Biblical idea that came to India much later through Jewish, Christian and Islamic traders and sea-faring merchants, and, eventually, warriors and colonizers.

The Vinaya Pitaka tells us how rules were created in a Buddhist monastery to stop sex between male monks. A young man had chosen to become a monk. But he could not control his libido and encouraged fellow monks to have sex with him. When they refused and admonished him, he approached novices, but even they refused and admonished him. Finally he went to the stables and approached men who tend to elephants and horses. They indulged him and then proceeded to make fun of him and gossiped about the pandaka (Pali for passive and probably effeminate homosexual) in the sangha. In response, it was decided not to ordain pandakas and disrobe those who had already been ordained. Thus all homosexuals were punished for the act of one individual (in the case of heterosexuals, more rules were created to restrain oversexed women, not men, the Vinaya Pitaka shows). With that, sex between men went underground. Friendship, however, was tolerated.

The Jataka tales tell the story of how the Buddha and his chief disciple, Ananda, were inseparable even in their former births. In one former life they were Chandala men who oversaw the burning of bodies. In another life, they were two deer, always together. The Jataka tells a similar story of the old monk Kesava and his love for his young pupil, Kappa. When the king sends for the old monk and refuses to let him go, the old man falls ill. His health improves only when he returns to the Himalayas and is able to see Kappa. In both stories, because they are monks, there is no talk of sex, not even in the previous lives. But there is always love. How does one classify this love?

Love mercifully has not been classified as good or bad, right or wrong. All kinds of love is socially sanctioned, but within limits.

Folk tales based on the Ramayan speak of how Sita is upset with the excessive devotion of Hanuman to Ram. He never leaves his side. When he learns that Sita puts a red vermilion mark on her forehead as a sign of her love, he daubs his whole body with vermilion. This is love of a smart and mighty, but very celibate, monkey for his god-king master who resides in his heart along with his queen, Sita. Across the world, there is always debate on whether an intense friendship between two men should be seen as love or as lust, homoerotic or homosexual. In Greek mythology, we hear the story of Achilles and Patroclus, who fought beside each other in the Trojan War. In the 2004 Hollywood film Troy, starring Brad Pitt, it was shown as a pure relationship devoid of sex. The film was a flop.

But in her 2011 best-selling novel Song Of Achilles, Madeline Miller makes their relationship a homosexual one, appealing to the younger generation of readers who had no problems with homosexuality. In the story, the obstacle to their love comes from Thetis, the sea-nymph, mother of Achilles.

In the Bible, we hear the story of the love between Jonathan and David. King Saul, Jonathan’s father, hates David, the killer of Goliath, because God has chosen David to be his heir. But Jonathan is in love with him and shares his armour with him, even though David marries his sister. Much later, Jonathan is killed in battle and David sings his lament: “I am distressed for you, my brother Jonathan; you have been very pleasant to me. Your love to me was more wonderful than the love of women.” Jonathan is at once brother and dearer than a woman.

Biblical scholars, who value abstinence, reject such sexual interpretations, but not modern LGBTQ (lesbian, gay, bisexual, transgender and queer) activists, who have even traced formal same-sex unions in Church liturgy called adelphopoiesis or “brother-making”. We see what we want to see. We allow what we are comfortable with, and what we are mature about. Love is indeed a splendid thing. But sex remains a bad habit.

This post has been reproduced from Devdutt Pattnaik’s blog and republished with the consent of the author.