My painting “Self-Love” depicts the need and necessity for any person, be it a transgendered woman or any other person who belongs to the LGBTQAI community or otherwise. The foreground of the image represents a transgender woman who is getting dressed up for an event, and on her hands, face and body are remnants of haldi(turmeric), which signifies that she is getting dressed for her marriage. Along with that front image is the imagery of some puppets that are dressed for a conventional wedding and standing separately from them is a puppet of a transgender woman who is taking an active participation in her own wedding. She doesn’t need the society’s validation or acceptance, she is happy and content in her own peace of mind. Then there is the image of the Phoenix, which symbolises rebirth; a phoenix, which is strong and majestic, rises from the fires of her trials and tribulations of the past. The imagery of the hand coming out of the shell is a reference to the “coming out of the closet” phrase, except she comes out of a shell and shines like a pearl.

Then there is a mini near-comic style image of a person who’s holding a placard saying “I’m me, I’m free”, and alongside the placard are all gender based pronouns that have been thrown into the garbage, symbolising that these pronouns have a somewhat crony and jaded meaning to them and ultimately act as a passive method of reinforcing stereotype based gender. The final image on the painting is of a woman who is shown to have the typical curvy, body, with a firm bosom and is wearing a noodle strap blouse and is also carrying a plate in which items  mostly used to worship a deity are kept. This symbolises the final transformation for the main foreground image of the transgender woman, and how society would worship a deity, a goddess. 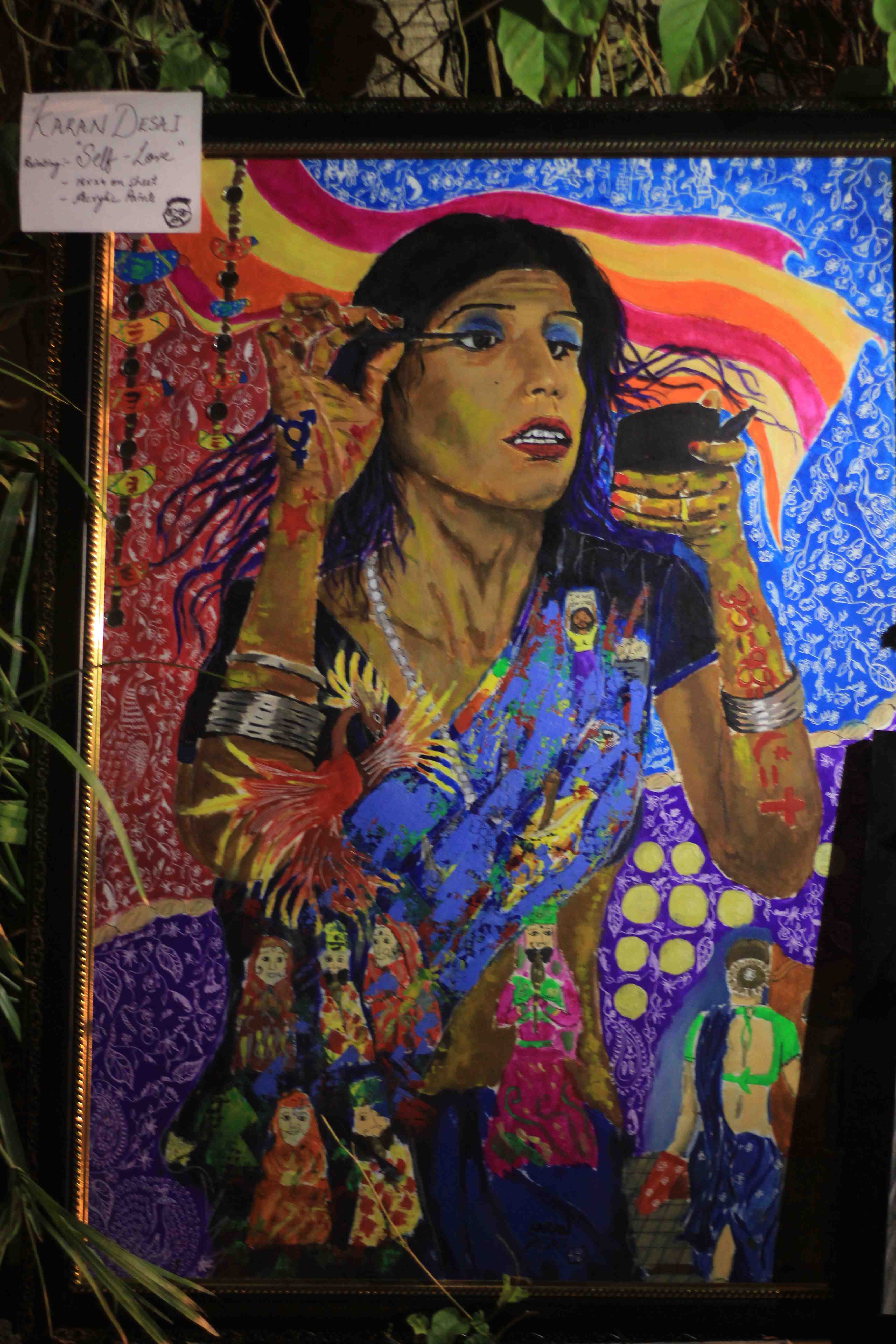 In many of my original paintings I tend to use a lot of allegory and imagery based references. That way I can justify the otherwise large size of the canvas or sheet that I’ve used. I also tend to apply heavy paint as a mark of making my paintings more meaningful and valuable. Though I’m currently an art student, I’ve been in contact with this stream of expression for over four years now. I’ve also been in contact with many artists who have told me that one of the evaluating features of a good, expensive painting is the volume of paint that has been placed on the canvas and the quality of it.

Finally, the background of my panting has block pattern based designs which are mostly found on women’s clothing and are very old school, and ethnic based items such as the birds hanging alongside the beads and the reflective glass on it. The glass is something that I added out of my own desire to go beyond the conventional barriers of paintings and to add something more unique and expressive to the image. My painting also carries some really strong shades of colour, like for the hair, the colour at the tips is violet. Then the painting also carries rose pink, purple, ultramarine blue, and mean blue in it. There is also a colour break of three strong colours, that is deep pink, orange and golden yellow. This design and combination of colour is something that is found in many of the clothing of women, and this entire wave of three colours is depicting a dupatta, flailing as the wind blows. Her hair are also flailing in the same motion, as a breeze gently blows by, caressing her face and body.

I got to present this painting at the Kinkpin presents Queer Carnival Delhi, which was organised by Gaylaxy Magazine. Alongside other artists and their work was placed my very humble, very conservative painting. It was an exceptional honour to be in the same light as other performances. The entire event had this eye catching blend of music, dance, poems and guitar based performances, all hosted by Mr. Gay World India Anwesh Sahoo and the ever lovely and amazing Spicy Tutuboy. I had even invited my mother to this event and she was also mesmerised by the talent and expression that such an event could bring out. Ever since that day I’ve been considering and planning to go about making more such paintings and ultimately open up an entire group of such paintings which shall be called “Reflections of Pride” and for some of the images that I have in mind I would like some of the people from the LGBTQAI community to pose and model for some of the images.

A special thank you to Gaylaxy Magazine and its founder-editor Sukhdeep Singh, who was kind and generous to have allowed me to present my work at such a prestigious event, and also for being able to make me feel at home and completely comfortable with the entire event. None of this would have been possible without his acceptance and support. I am new to this colourful and beautiful community and when I was at the carnival, I did not at any time feel out of my comfort zone or intimidated. I felt as if I was accepted for who I was and that I was appreciated and loved for by nature and courtesy.

I shall look forward to present my work at any such event in the future, and I would like everyone who comes there to see it and give their honest opinion and views about it.