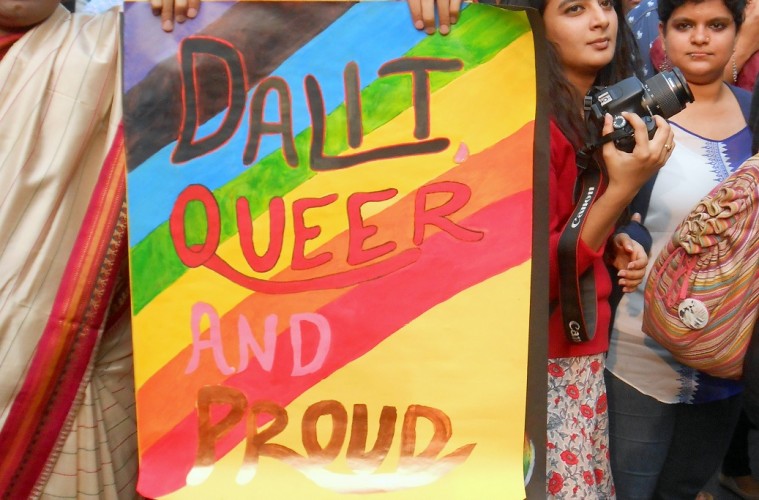 On the last Sunday of November every year, hundreds of people come together to take over the streets of the Capital in celebration and defiance of their queer selves.

For a few hours, the roads of officious central Delhi are transformed into a riot of colours, cries, posters and assertion of identities that don’t hanker for social sanction or government stamp.

For me, the November pride has always been a singular kind of catharsis – as if every single one of us is trying to make amends for the year’s weight of crimes and atrocities by the State and its forces, often ordered from the very streets on which we dance.

On this count alone, 2016 couldn’t end sooner. The year has been besieged by countless violation of rights, dignity and human life, dedicated at the altar of the dominant nation, party, caste or gender.

We march under the shadow of Tara’s death that exposes fanatical hatred and bias against trans folk, countless murders and blindings in Kashmir, numerous anti-Dalit and anti-Adivasi atrocities and a seepage of hatred and muscular nationalism into our collective consciousness, lifestyle and language.

As we walk on Sunday, more Dalit and Adivasi children will be dying in Odisha’s Malkangiri – a tragedy that has unfolded over the past three months without any attention from many of us. People will be queued up outside banks and ATMs, trying to withdraw their rightful income, some of them dying of tension, exhaustion or despair.  As this year’s statement says, “Pride has seldom come at a more grim time.”

But despite this onslaught of high-voltage atrocity and the continual thumping of nationalist chests, complaints have poured in that by talking about the various kinds of hate, crimes and oppressions – one is derailing pride and a fight for queer issues.

This sentiment isn’t new but the kind of complaints – of turning pride into an anti-BJP show, settling personal scores, not understanding queerness or having “real queer issues” – are both angry and incisive. I have also received many personal messages that say we are responsible for diverting the real queer cause, that “others” can fight their own battles, that we were “betraying” the cause and were responsible for the supposed dwindling attendance at pride.

Some of my friends and inspirations have responded to this in language more eloquent than I could ever muster.

This article isn’t a defence of our stance, it is an assertion that anything short of this is a betrayal of our queer mothers, fore-strugglers and people who fearlessly demanded queer pride in defiance of oppressors.

Queer individuals and communities don’t lead single-issue lives – we are affected when women aren’t allowed to go out of college hostels, when Dalits are butchered every day for just existing, when Adivasis are forced out of their centuries-old home for our development and people with disability (PWD) are asked to be happy with a moniker.

This isn’t a question of solidarity – or “aap kahan they sathi” brand of politics – but goes to the heart of what we hold as queer – it is a clash of imaginations.

For many of us, queer struggles will end with ending 377 (or ushering in marriage), so it is possible to take pro-nationalist stances, to say AFSPA is for culling “terrorists” and wonder why Dalits, Adivasis and people with disability can’t fight for their own rights.

But for so many of us others, who will walk alongside me tomorrow, life would not come in neat, separated boxes of “we are just like you”. We will fight for dignity and respect in our lives, our selves as Dalits, Kashmiris, Adivasis, PWDs, poor, trans, women and others we continue to erase. It is in this that queerness lies, in the challenge to power and oppression. Anything less won’t do.