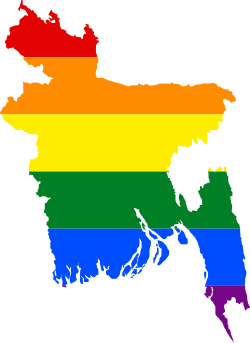 The LGBTIQ community in Bangladesh’s capital Dhaka is shaken after 4 members were detained by the police after their participation inPohela Boishakh, a Bengali New Year festival celebration. The organizers Roopbaan, a Dhaka-based LGBTIQ platform, say they were also told that they were banned from participating in future.

Gaylaxy Magazine covered, inHindiandEnglish, prior Dhaka queer community participation in theMongol Shobhajatra, or the Auspicious Parade on April 14, 2014, 2 years to the day before this unfortunate incident; as well as Roopbaan’slaunch of an eponymous magazine.

“We cancelled our planned rainbow rally based on police instructions given the night before,” said a member of the organizing group over email, requesting anonymity. “We went to Dhaka University on Thursday morning only to inform participants that the rally was cancelled, and that they were free to enjoy the rest of the day on their own. Due to the fact that the news of this cancellation came in quite late on Wednesday night, we were unable to inform everyone who had expressed interest in participation, over the phone or via social media.”

“Four to five participants asked if they could take the paper flowers that we had made for the rally, and we saw no harm in such a small quantity and gave them what they requested. After most of us had returned home, those persons who were in the parade, were picked up by police and detained for ‘trying to initiate a rainbow rally’.”

Since August 2013, Bangladesh has been privy to a gradual opening up of public space to sexuality and gender minorities, but also with a commensurate religious conservative backlash. Dhaka Tribune, a leading English dailycalling for the decriminalization of same-sex relationsin the country, in an editorial on August 29, 2013. These are presently outlawed under Section 377 of the Bangladesh Criminal Code.

“It was a day of absolute trauma,” says the organizing member recalling the detentions and subsequent release. “The four persons were released around 9 p.m. on April 14 without any charges. They had been arrested at around 11:15 a.m. the same day. They were taken to the Shahbagh Police Station, near the designated starting point of the march, Shahbagh, which was to culminate at Dhaka University.” “However, the police asked their legal guardians to come, and only after informing them that their sons are homosexuals,” the organizing member continued. “Their identity was also revealed to some press members. Family members of two of the community members were able to go to the police station. We, the organizing group, briefed them before they met the police that their children had done nothing wrong. The other two persons were released to women who identified themselves as activists of a local women’s rights non-governmental organization”

The then-Government of Bangladeshrejected the callfor decriminalization of gay sex, in the 24th regular session of the United Nations Human Rights Commission’s Universal Periodic Review, for the second time after 2009.