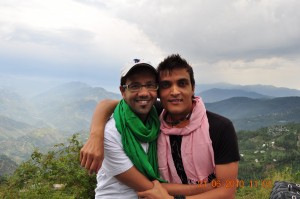 While Dr. Himadri Roy is an Associate Professor with School of Gender and Development Studies of Indira Gandhi National Open University (IGNOU), New Delhi; Shiv Sahoo is an Academic Co-ordinator with Alliance Francaise de Delhi. The two recently celebrated their 8th anniversary. Sukhdeep Singh talks to them to find out more about their love story

Where did the two of you meet at first?

Himadri: We met at Dilli Haat in INA in New Delhi.
Shiv: We met on 25th December, 2003. I still can remember clearly.

Was it Love at first sight?

Himadri: It was definitely for me, because at the first sight I saw innocence, purity and truth in his eyes.
Shiv: No, not for me!

Himadri (laughs): Propose? Does one need to propose? I don’t think so, cause when your physical, emotional, mental and ephemeral vibes match, I feel one doesn’t need to.
Shiv: Definitely, we didn’t propose each other like young people propose carrying heart-shaped gifts. But yes, later on with passage of time, we liked each other and you can say, it was an informal proposal for settling down together.

How did your family and friends react to your relationship?

Himadri: My Maa was the happiest person among all, thinking that I got someone who would really go to the end of the world with me. Yes, my brother was reluctant at the beginning but with time and his loving nature he won my brother’s heart also. As for friends yes, most of my close friends appreciated that I got someone, irrespective of their own sexuality. Some who had a crush on me, felt disheartened. So they alienated themselves from me. But as time passed, we again became friends.
Shiv: My mother is no more and I think it’s difficult for my father to accept a gay relationship. He is 73 now, and I am not prepared to give him any shock of such things. My colleagues know about us and I think a few of my straight friends have an idea, although I haven’t discussed with them directly, neither have they enquired about it.

How would you describe your partner?

Himadri (smiles): I would sing the song “I want to spend my lifetime loving you, If that is all in life I ever do!” To cut the crap of romance, let me say he is not only caring, but also compassionate, understanding, rational, perseverant and obviously without any doubt he is loyal and trustworthy.
Shiv: I must say I am lucky to have him in my life. I cannot describe in words.

What is the one thing about the other that you like and dislike the most?
Himadri (ponders): The best thing I adore about him is the caring heart and soul he has. As to what I dislike…Hmm…He gets angry very fast, but yes pacifies faster than that. And lots of people say that he is arrogant and has an attitude. But, I don’t find these traits in him.
Shiv: Well in my bag I have a long list of things which I like about him. About dislike…hmmm… I find him restless and serious when difficult situations come.

Are you two living together? What are the challenges that you face?

Himadri: Yes since our love affair began, within few months, he shifted to my rented apartment; and so we are living together since then. Hmm… About challenges, yes while we were hunting for a new apartment on rent back in 2004, we had to lie to the landlord that we were cousins. I think today the scenario must have changed, I haven’t got much idea to comment on that, as we are still staying in that same apartment.
Shiv: Of course we are living together! In front of my relatives, it seems quite difficult to explain. Also whenever there is any legal issues cropping up, where we need to fill up our spouse’s name or nominations for legal rights, we can’t take any initiative of such things. 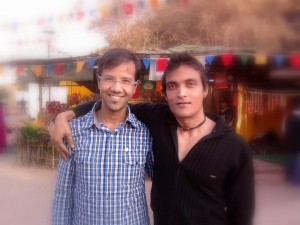 If the two of you get into a fight, how do you resolve it?

Himadri (laughs): If there’s an argument, we argue a lot and then one of us keeps silent. And it’s obvious you cannot keep shouting on the blank walls.
Shiv: I expect the first step from him and I always get it according to my expectation.

Did you perform any kind of social ceremony to solemnize your relationship?

Himadri: Social ceremony! That’s a typical hetero-normative concept! None of us would like to go for it. My Maa blessed us together as a couple, I think that is sufficient for a relationship to get social approval.
Shiv: No… isn’t the eternal bond between two hearts enough?

Do you plan on marrying in a country where same-sex couples are allowed to marry?

Himadri: No way! We are happy in living together in Delhi. Yes if ever, in Delhi, legal marriages are allowed, I don’t mind going for it. I think that would be great. But God knows…if ever that happens.
Shiv: Yes… we can think to marry, but in India only.

What activities do the two of you enjoy together?

Himadri: The most important thing we love doing is traveling. Somehow both of us have inclinations for the same place. Besides that, cooking is another passion we share. Watching movies…yeah we do watch them in multiplexes but rarely. Most of the movies these days are all disgusting… so we chalk out carefully which one to watch… I will say, this year the first movie we watched together is URUMI, a Malayalam feature film. Otherwise, we watch classical performances, theatre, art exhibitions, and other stuff together.

Himadri (thoughtfully): Time will tell. Not prepared at present.
Shiv: I would love to adopt kids but it’s a big challenge and lots of responsibilities.

Share the secret of maintaining a long term relation with our readers.

Himadri: Secret! (Laughs loudly) I think the most important is providing space to each other. To be frank enough, before anyone comes to your life, you have your own set-up of social circles, family, friends, colleagues, others. It would be very aggressive if you sever those bondages just for one individual. There’s no doubt that He should be the most important person and you give him most of your time… but not all the time of your life should be given only to him. To conclude in one sentence…you should have three Cs, i.e. Compassionate, Considerate and Caring.
Shiv: Secret… there is no secret, no magic at all. I am lucky to have the support of our family, friends and of course the blessing of god. I am happy to see other same sex couples. One just needs to understand each other.