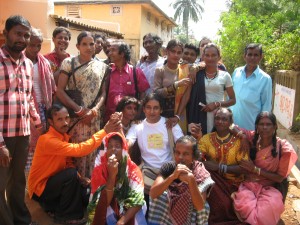 Amitava Sarkar at a training programme for transgenders

They can be seen at the forefront of any gay- parade or gay movement. Where closeted gay men still fear to step out, they form a large chunk of these parades. Due to their colourful dresses and loud behavior, they often attract the eye of the media. ‘They’ being the transgender community. Transgender rights have made some inroads in India though, with the Election Commission adding “others” category to forms and web pages asking for gender identity. Recently, Veena S. became the first transgender to contest an election in South India. Kolkata too played host to the first ever ‘Consultation for MSM & Transgender’ with the theme- Celebrating gains, conforming challenges, forging future. Yet, when it comes to awareness about transgender issues, not only the “straight” society, but many from within the community remain quite ignorant about these. Often ridiculed by their family and abused by the society, their tale remains hidden behind their colourful dresses. It is this struggle that Gaylaxy hopes to highlight and bring forth in this issue.

For the uninitiated, a transgender person is someone whose personal idea of gender does not correlate with the anatomical sex with which he or she was born. It refers to the feeling of not being born into the “right” physical body. A person whose gender identity does not match their anatomical sex may, or may not, elect to undergo chemical and/or surgical alteration.

For all transgenders, the struggle generally starts from an early stage, and usually from their home. The non- conformity to their “assigned” gender often leads to verbal and physical abuse at the hands of their parents. The situation is especially grim in the case of young gender variant boys, who try to express their feminine side and meet with violence at home. India is a patriarchal society after all and a male person needs to have a masculine character and indulge in masculine activities, failing which he becomes a subject of ridicule. After home, school is where a child spends maximum time and forms an important part of an individual’s life, for it not only shapes his/her character, but also imparts a lot of skills. However, things aren’t as simple at school either, where they are often bullied for their “variant” ways and tastes. As these young boys grow and reach adolescence, the bullying at school often becomes too much of a mental trauma to bear for them.  Unable to communicate their thoughts to anyone, a feeling of loneliness sets in. Adolescence in itself being such a confusing stage, the confusion surrounding their own identity and the harassment being faced in the hands of classmates and teachers is often more than they can handle, with many choosing to drop-out from school. Rajarshi Chakrabarty, who presented a paper on Transgender Adolescence in the International Conference on AIDS in Asia and Pacific (ICAAP), Japan in 2005 and is also associated with Swikriti- an NGO working on sexuality issues in Kolkata, recalls: “During a PTA meet, the father of a boy studying in Class 8 complained about the growing feminine behavior of his son to the class teacher. While the class teacher pointed it out as a hormonal problem, another teacher nearby proposed physically beating the boy.”

Without a formal education, and with growing pressure to support the family in a traditional way by being the bread-earner, many take up prostitution or join the “Hijra” community. In the eastern part of the country, many join the troops as a “Launda Dancer”- the traditional dancing boys who perform in weddings in Uttar Pradesh and Bihar; all this exposing them to further exploitation and putting them at a greater risk of contracting various STIs (sexually transmitted infections), often at a tender age. In its 2006 report titled ‘Dancing Boys: Traditional prostitution of young males in India’, PLUS Kolkata- a support group for gender variant people, highlights the reason: “Gender variant men are attracted to launda dancing mainly by the money and the freedom to express their womanly instincts away from the jibes of relatives and neighbours. In spite of the risks involved, very few actually want to quit the seasonal profession because of lack of alternatives.” The report throws some disturbing facts too. While 30% of the respondents were in the age-group of 15-19 years, 29% were illiterate and 7.25% were just literate. Violence often becomes an integral part of their life, with 91% of the respondents agreeing to having faced it in the last 12 months. Upon returning, their bodies bear testimony to the violence faced, but they choose to remain silent, with many returning back again due to lack of other opportunities. As they grow and become more aware of their feelings, some start taking hormonal medicines, often without proper medical advice and guidance, putting their health at grave risk.

There are those who decide not to quit despite all hardships, and the journey remains an extremely tough one for them too. Consider the case of Raj Kr. Das, who is currently pursuing graduation from a college in Kolkata. “While in the first year of my college, I was being harassed by a gang of boys. When I approached our principal, he rebuked the boys telling them that I suffered from a hormonal problem,” recalls Raj, pointing out how little awareness is there on these issues even among the “educated”.  Even with the best of education, it becomes hard for them to find a job, with the interviewer often rejecting them on some flimsy pretext. Bhanu’s story is a perfect reflection of this. An extremely talented athlete who represented West Bengal at National level seven times and won several medals in 100m, 200m and long jump, Bhanu could not secure a job in Railways or Police and is currently working as a Peer Educator for Manas Bangla in Kolkata, the athletic dream having died way back in 2001. For the few who do manage to get a job at some MNC or other corporate business, sexual advances and being made fun of are some of the things that they have to face.

The social stigma that the transgenders have to face every day is beyond human fathoming. Some of the basic rights and services that are taken for granted are frequently denied to them. Paramedics and health officials are often ill- equipped to deal with their problems, at times refusing them treatment. Kunal Chawdhury, who is associated with Swikriti and has been working on transgender issues says, “When availing of facilities in hospitals, doctors remain confused as to admit them under the male or female ward and the patient has to go through an emotional turmoil.” Kalki Subramanium, a transgender activist from Tamil Nadu spoke further of the suffering: “A transgender friend required urgent attention. While we were waiting to get her admitted, the nurses at the hospital kept arguing about the ward in which she should be admitted, oblivious of the her suffering and pain.” Though the Election Commission recently added “other” category in its forms, other important services still don’t provide such an option. Whether it relates to opening of bank account or getting a ration card issued, they often have to go through a harrowing experience. Laxmi Narayan Tripathi, a well known transgender activist, was recently evicted by the management of Bombay Gymkhana from a dinner party hosted by a club member. The incident got reported in all major dailies due to her stature. However, there are numerous such incidents happening each day with various transgenders which never find any space anywhere and go unreported.

When it comes to transgender issues, Tamil Nadu is far ahead of the rest of the country. In 2008, the state established a transgender welfare board, with the social welfare minister serving as the president of the board. Further, Tamil Nadu Government also issued an order on May 2008 to create a third gender for admissions to government colleges. Tamil cable channel Vijay TV has a talk show hosted by a trans woman named Rose. The programme is called “Ippadikku Rose”, meaning ‘Yours, Rose’. The state also boasts of a telephone helpline called “Manasu” (“mind” in English) set up by Tamil Nadu AIDS Initiative-Voluntary Health Services (TAI-VHS) for members of the transgender community, their families and the public. It was launched by V. K. Subburaj, Principal Secretary of Health Department of Tamil Nadu in March 2009 with the aim of helping transgender people in Tamil Nadu find employment. Such advancement has been possible by a concerted effort by various NGOs and government to integrate the community with mainstream society. Sahodari, founded by Kalki Subramanium, is one such NGO. Kalki worked in an IT company before giving up her high paying job to espouse the transgender cause. She has even launched world’s first matrimonial website for transsexual women – Thirunangai.net. A message posted on the site reads: “We celebrate the women in us more than biological women do.”

Work undertaken at other parts

A lot of commendable work has been done by NGOs and other support groups all over India, with an objective of 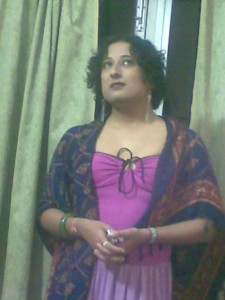 spreading awareness and empowering them through education and other vocational training, as well as provide health care services. Swikriti, along with Birla Institute of Technology, Kolkata, organized a training programme on machine embroidery. Similarly, Amitava Sarkar, a transgender activist and director of various documentary movies on trans issues, is working on a number of projects for the social and economic upliftment of the community. Santi Seva Development Project is one such project. The project, funded by American Jewish World Service, New York, aims to improve the overall well being of Hijras, Maichiyas and other male-to-female transgender populations in the Bhadrak district of Orissa, and reduce their vulnerability to HIV, provide livelihood, adult (non-formal) education, health and social security support. Plus Kolkata also has various Income Generation Programmes wherein training is imparted in handicrafts etc. Often, they are a talented lot who are especially good at performing arts, designing, choreography and other such creative works. These talents need to be brought forth. Indian Super Queen – the first ever transgender beauty pageant in India- concluded in February 2010 and highlighted the talent of the community.

Sensitization remains the key word to solving the hurdles faced by the community. Tamil Nadu remains an example to be emulated. Empowerment through education alone can help them in becoming financially strong. Amitava Sarkar acknowledges, “The Government should take steps to sensitize the public as well as other service providers like the medical fraternity.” Laws prohibiting discrimination on the grounds of one’s gender identity would also go a long way in ensuring that the community receives the dignity every individual deserves, and that the likes of Raj do not find it difficult to get employed. For those still struggling to cope up, there is inspiration to be drawn from Kalki Subramanium and Rose.