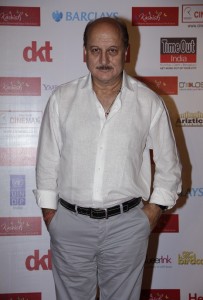 Internationally acclaimed National Award winning actor Anupam Kher and his acting school ‘Actor Prepares’ will sponsor the top prizes at this year’s KASHISH Mumbai International Queer Film Festival – India’s biggest lesbian, gay, bisexual and transgender film festival. Anupam Kher announced that the cash prizes will go to the Best Narrative Film and the Best Indian Short film. A new award will also be handed out by Actor Prepares for the Best Actor in a Lead Role. Path-breaking LGBT films from India and around the world will compete for the awards which will be given at the closing of KASHISH 2013.

“As a Chief Guest last year at Kashish 2012, I was really amazed at the quality of cinema that I got to see. Sponsoring awards for Kashish is our (Actor Prepares’) way of acknowledging their efforts for a better Cinema with little means,” said Anupam Kher.
Sridhar Rangayan, festival director said, “We are indeed very happy and proud that Mr.Anupam Kher is supporting KASHISH by sponsoring awards this year. Last year Mr. Kher was the Chief Guest at the Closing Night Ceremony and was so impressed by the festival and the films, that he announced his intention to sponsor the awards. We are grateful to him for this gesture and also for adding one more category – best actor in a leading role. These awards are a big boost to young filmmakers who make LGBT themed films against many odds.”
The winners, along with awards in other categories will be selected by an international jury panel comprising noted filmmaker Aruna Raje, Bollywood actor and model Simone Singh, theater director Quasar Thakore Padamsee, author and poet Jerry Pinto and Iris Prize festival director Berwyn Rowlands.
KASHISH Mumbai International Queer Film festival 2013 – the fourth edition of India’s biggest queer film fest is scheduled to be held between May 22-26, 2013.  The 4th edition of the festival will be held at a Cinemax Versova in Andheri West between May 22-26, 2013 and at Alliance Française de Bombay from May 23-25, 2013. The festival will screen 132 films from 40 countries.The theme of the festival this year is Towards Change.