Just  five days after the whole country was left shocked at the horrific rape of a 5 year old girl child that has led to wide-spread protests against rape in Delhi, many Indians were so enthralled after watching Chris Gayle’s performance in the on going IPL Cricket tournament, that they were sharing rape jokes across social media platforms and trivialising the issue of rape and sexual violence against which the whole country is struggling.

In the match played on April 23rd between  Royal Challengers Blue and Pune Warriors, Chris Gayle scored a whopping 175 in mere 66 balls and Royal Challengers soon crushed Pune Warriors. No sooner had the Gayle inning ended that jokes glorifying rape and gang-rapes as “macho” started doing the rounds in India. The joke that equated gays with rapists went as, “If a man rapes another man, he is called gay; If a man rapes  11 men, he is called GAYle”.

India is going through a severe crisis of sexual violence against women, and there has been a marked increase of cases of gang-rapes across the country. The most horrific case of the gang-rape of a young girl in Delhi on Dec 16 last year saw the whole country erupting in anger, and the Govt. finally setting up a committee to recommend changes to the law. The committee, which was headed by Justice JS Verma, recommended various changes, some of which were incorporated recently. Even after that, cases of sexual violence have not gone down in India, and the country tipped again after being shocked by the news of another brutal rape of a young kid of 5yrs old in Delhi. In his report, Justice Verma had also recommended sex and sexuality education in schools to educate people and curb the increasing sexual violence. It is only ironical that a day after Justice Verma died due to multiple organ failure; these rape jokes went viral in the country.

A post shared on a Facebook Page has already received more than 15k likes and nearly 11k shares(at the moment of writing this report). Some users though have condemned the post. One such user wrote, “This is immensely insensitive – if a man rapes a man or a woman or a boy/girl child he is still a RAPIST. We have no right to malign gay people who have consensual sex with their partners.” Another one commented, “This joke is extremely sick on multiple levels. It is equating rapists with gays and then trivalising the issue of rape. Rapists who rape men are not gay. They are rapists. Men who are sexually attracted towards men are gay. And they are not rapists if the act is consensual. It is also extremely sad to note that around 14000 people who have liked this post do not understand either the issue of sexuality or of rape! Shame!”

Sexual violence and rape are something that Indians have started taking so lightly that a cricketer is equated to a serial-rapist (of men) to appreciate his performance. Given this sad state of affairs and sick mentality, there seems no hope of any reduction of sexual violence against women, and dignity for gays in this country. 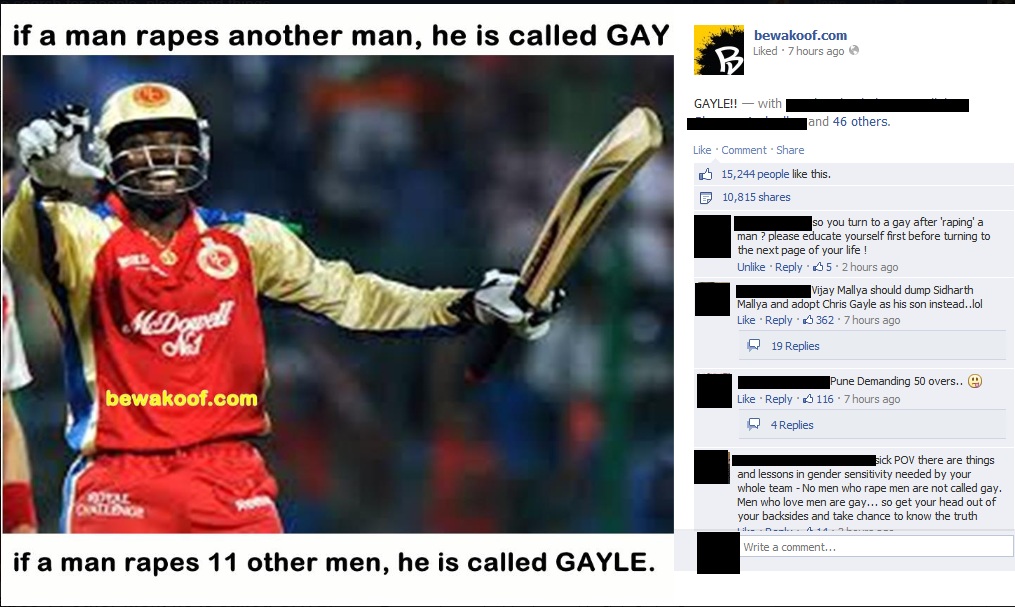 A Rape Joke doing the rounds in India