Taan- A New Glee Like TV Series In Pakistan Set To Tackle Social Taboos, Including Homosexuality 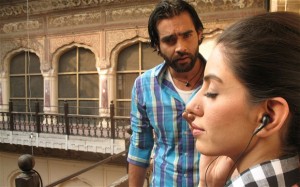 A scene from the TV series TAAN

Lahore: Amidst the rise of religious extremism and violence, leaving little or no space for liberal and progressive individuals and movements to develop, Pakistan is going to create a benchmark with its adaptation of renowned American high school musical Glee by the name of Taan. Shot in the cultural capital Lahore, with a backdrop of music academy, Taan talks about the lives and relations of a bunch of young individuals who regularly burst into songs. Apart from reworking on almost 100 classic Pakistani songs to suit modern tastes, as Glee does, Taan talks about a range of sensitive social issues like same sex love and desire between two men to the love affair between a religious extremist and a Christian woman.

Although, this 26-episode series has been scheduled for  September or October this year, but its news has already started generating debates in social media. In the comments section of The Dawn, a leading Pakistani newspaper, the news about Taan received mostly negative comments. One said, “What is this? Another sick twisting mind stunt by the liberal fascist elite minority.” Another one commented, “Would not go into the religion debate as people link you to Taliban. But Why? Oh Why do you want to promote unnatural human behaviors? Why do you want to desensitize the young generation? Do people of Pakistan seriously want their children to grow up in such a society where Taboo issues are no longer Taboo? Do we seriously want this? Why?”

While another commented in a positive direction too, “Don’t you think that it is necessary to tackle important social issues and have a sincere, rational discussion about them? This show, to me, is an attempt to counter the influence of Islamic extremism and radicalism that has so strongly pervaded all aspects of our society. The very same extremism and radicalism that has propagated and normalized the idea that a scientific worldview is heretical, thus hindering any scientific progress that we might achieve. And god forbids you question anything you find unreasonable.”

Now, how the audiences at large will receive this series is yet to be determined but one thing is for sure that it’s going to create a debate and discussion anyways.