Growing up in a traditional Pakistani household during 80’s with what I latter came to identify as ‘homosexuality’ or ‘gaiety’, seemed like a unique experience when everything around me; from social structures to popular imageries, from conversations to choices, all were deeply rooted in a patriarchal heteronormative system where any variance from this repository of preconceived rules and regulations, was viewed as a social, religious or moral deviance with serious repercussions. Institute of marriage is undoubtedly considered as the epitome of this patriarchal heteronormative system, which enables the propagation and dissemination of this very idea that ‘settling down’ and ‘getting married’ one day should be the ultimate goal of everyone’s life, and needless to say the contract of holy marriage is always between a man and a woman, end of conversation.

That was quite unsettling for me because I didn’t believe in marrying under the pretext of a social/religious obligation and that too to a woman. Neither was I seeking any permission to have sex with a man, that was hardly enough for me. What I was actually looking for at that time was to have some system enabling me to envision a life of love, intimacy and commitment with a man in the context of a religiously alive traditional Islam. That’s where the effectiveness of books like Islamic Law and Muslim Same-Sex Unions (2016) by Junaid Jahangir and Hussein Abullatif comes right in; for not only collating the scattered historical references and diverse opinions of scholars and jurists at one place but also arguing for the establishment of sexual ethics for same sex couples, from within the Islamic paradigm by employing the classical Islamic tools of decree. 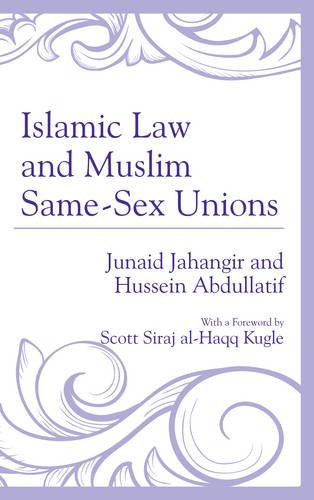 Lexington Books- An imprint of Rowman and Littlefield

Initially, it comes across as an extension of “Implied cases for Muslim Same Sex Unions in Islam” (2010), an article by Junaid Jahangir (published in Islam and Homosexuality, edited by Dr. Samar Habib), but once you start reading it, you realize that this book has much more to offer. Divided into seven chapters, first of which actually sets the tone for the whole book as it challenges the misconceptions around the issue of homosexuality while offering clarifications to set the record straight. Second chapter explores the linguistic and contextual analysis of the verses on the people of Lut in Qur’an while arguing that this primary Muslim text is silent on the issue of same-sex legal contract.

Third chapter develops arguments on the basis of strength of transmission chain and matn (content) analysis of the Hadith literature. Fourth chapter is solely dedicated to the exploration of the texts regarding the act of anal sex and its apparent prohibition; to address the popular argument given by contemporary conservative Muslim scholars who reduce the concerns and lives of Muslim gays and lesbians just to this single act. Fifth chapter explores the opinions of the classical jurists on the issue while developing an analogical framework to sustain the argument that the issue of legal contract for same sex couples wasn’t brought up due to socio-economic conditions and medical knowledge of their times. Sixth chapter addresses the arguments propounded by contemporary conservative Muslim scholars while deconstructing the ijima (consensus) rulings in this case. Seventh and last chapter, while wrapping up the conversation, establishes the case for Muslim same-sex unions on the basis of Islamic principle of alleviating usr (undue hardship).

Another noteworthy line of argument the authors have subtlety employed is their treatment of establishing the case for same-sex unions. Instead of dealing with the issue as a polar opposite of heterosexual marriage; they argued for it as an independent, conspicuous and self-regulating concept totally unconditional to the imagined or actual demands for the imitation of what we regard as heteronormativity. This approach further eradicates the potential of developing certain kind of homonormativity(ies) within the sub-culture while broadening up the scope of the nature of same sex unions, within the basic Islamic framework. Therefore, the usual questions like who is going to pay mahr (mandatory payment paid to the bride for giving sexual access), which partner would be allowed to have a maximum of four spouses , the application of idda ( a woman’s period of waiting after divorce or death of the husband), who would be the protector and held responsible for providing for the family, who gets the right to divorce, which of the spouses would have a walī (custodian), who would be the maḥram (unmarriageable kin) and before whom would the gaze have to be lowered, would someone else be allowed in the home when the spouse is away, and finally do explicit scriptural texts exist that ban same-sex incest with fathers and brothers just as they exist for mothers and sisters; all seem irrelevant.

This book has everything that its title claims and there have been quite a few moments of emotive resonance I personally went through while reading it. I am sure it was the same for the authors who seemed so passionate about making this case for not only the Muslim same-sex individuals and couples themselves but also for their allies, family and friends who usually withdraw their support and love under the pretext of Islamic injections and culture. The only question left now is regarding the practical application of these arguments and rulings into Muslim majority societies, as many Muslims living in western diaspora are already enjoying legally sanctioned same sex unions and marriages under their respective civil laws. At this point in time, it seems difficult to assess its effectiveness but with the passage of time let’s hope things will change for better.