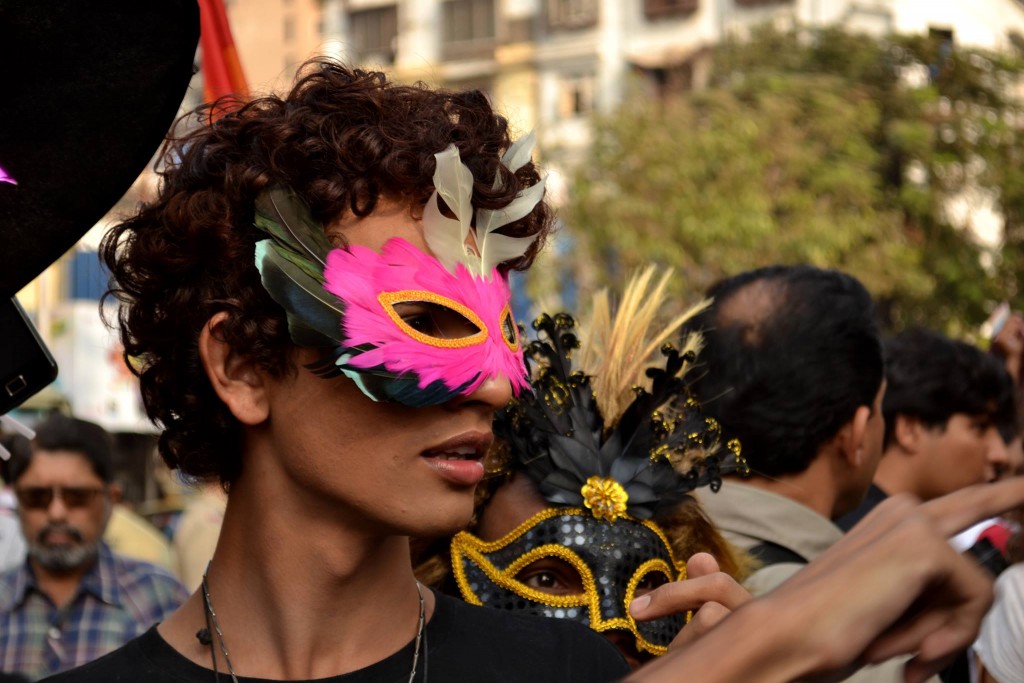 I hurried to to the rendezvous, at the front gate of Jadavpur Police station close to my university. We had arranged to meet there. I could barely wait to see him.

As part of my involvement with the Kolkata Rainbow Pride Walk, I sent out many invitations to student bodies and also to members of dating sites who might wish to join the Walk. The response from one of the sites was flattering, and it seemed as if lots of guys were definitely going to show up. But somehow I was not sure if the interest was more in hooking up or in the Walk. Nevertheless, I was flattered but stuck to my purpose which was to inspire the men on dating sites to step out of the hooking up scene and actually show up as part of a community.

But then, I saw him as I scrolled through the site. I had seen him before on that dating site and every time my body burned with desire to touch him, be with him, but he did not seem to be interested. I don’t know what it was. Whether it was just the fit of his jeans on his well proportioned body or his dazzling smile. There was something else, a magnetism, that drew me to him, and made the blood pound in my ears.

It had been a long hard week, meeting with teachers’ organizations and student bodies of two universities and I was so ready to just have a break. Something fun and exciting to escape the tedium of conversations and discussions all for the Kolkata Rainbow Pride Walk.

My mind was wild with naughty possibilities. It had been so long since I had a date, or even a coffee with a potential date. And just like that, I had a proposal to meet in person. He asked me to meet him. I could not believe it. He wanted a rendezvous at the gates of the Jadavpur Police Station.

A date! I thought, trying to remember the last time I had one. I could not recollect, so busy had I been. The only fun thing I had done in ages was to have a fun “adda” with the notable lawyer Aditya Bandopadhyay who is always such a delight that I could forget my commitments.

So let me go back to where I started my story, at the gates of the Jadavpur Police station, the appointed meeting place, my thirsty eyes searching for that handsome face, scanning the crowds that flowed by. Was he going to stand me up? I looked at my watch. I was right on time. But where was my Prince Charming?

Then I saw him, for the first time, in the flesh. I recognised the handsome face and as he drew closer, I recognised the blue denims worn with a white linen shirt. I noticed that he was a bit thinner than he appeared in the photograph, and that was not what I was primarily attracted to. But I thought, it is OK. At least we have a date and even if he is somewhat skinny and looks a little arrogant, I should not write him off without getting to know him.
He put his hand out, his handshake, nonchalant. He said, “Hi, Nasir here.” I felt a rush of disappointment at the casualness of his greeting.

“Oh, nice to meet you in person, by the way what is your education?” I asked. It is a very silly question I always ask when I meet anyone, to break the ice.

“I am higher secondary pass,” Nasir replied without missing a beat, grinning confidently.

My Ph.D. degree seemed no match for Nasir’s self assurance, as I started fighting the feeling of inferiority. What was this happening to me? I had never felt like this before. And then he dropped the bomb.

“Let’s go to your office. It must be empty?” Nasir winked at me.

“Oh, my God!” I thought to myself, my knees suddenly weak with the shock of the blatant pass he was making without even a customary social foreplay.

“No, maybe we can first go to some nearby restaurant and have something to eat. I am feeling very hungry,” I said casually, feeling anything but.

“By the way, you had said that you are a businessman, what type of business you are in?” I asked.

“No, I look after the small pan shop of my father that is in the shanties where we live.”

No, how can I sit with someone like him. What can we have in common? We were worlds apart in our education and our values in life. I could not stop feeling that this was hopeless. I was lost in my thoughts as we settled down in the food court of my favorite shopping mall. Refusing to admit defeat I told myself resolutely that I would do my best to make this date work. We sat down in a table with a plate of chicken biryani.

“By the way I am straight,” Nasir declared, out of the blue. “What are you? Top, Bottom or…” I just could not trust my ears. I could not help wondering what I was doing there with someone so crass, and even more importantly what the hell was he doing on a gay dating site?

“Top or bottom… it should not matter to you, since you are straight. Right?” I had to say it.

The afternoon seemed to be a long stretch of awkwardness, and I felt a terrible sense of disappointment. Nasir broke the silence, by turning on his charm. He leaned forward, very close to my face, and then took a spoonful of biryani and slowly chewed it. His allure was still strong. I found myself attracted to him, against my will.

“You were telling about some program, some rally or something, no?” he asked relishing the biryani.

I immediately sat up, at the mention of the event I had dedicated so much of my life to. “Yes, Kolkata Rainbow Pride Walk. Have you heard about Section 377?”

“What **** this small plate of biriyani costs 377!” he exclaimed uttering some choicest slangs. I tried to remain calm.
All is not lost yet, and I am not backing out, I thought. So I explained to him the meaning and consequences of Section 377. Did I see a shadow of anxiety in his face, I thought to myself. “I was with Aditya Bandopadhyay yesterday,” I declared.

Nasir seemed unfazed and barely connected to my conversation, clearly having no clue about the role Aditya Bandopadhyay had played in the High Court case overturning Section 377.

He brightened up and stood up in his chair, hearing a clearly familiar name.

“Have you dated Aditya Pancholi also? Is he a bottom?”

I almost choked on my rice. “No, no, a very well-known lawyer and activist.” It was all I could say, fighting to keep my disdain and irritation under control. This date was going horribly wrong.

Bravely I tried to tell as much as I could about gender issues, gay rights and the rights guaranteed by our constitution, unable to look at Nasir in the eye, while I concentrated on idly playing with grains of rice and chicken in my biryani. Nasir looked bored to death and when I occasionally looked at him, he looked completely disinterested, shoulders hunched as he outlined patterns on the table cloth. And once in a while he sat up as if waking from a trance and looked perturbed for a few seconds before returning to his look of a man condemned to listen to my discourse.

I finally conceded defeat in my attempt to engage him on anything besides sexual positions and random encounters. This date had to be politely ended very soon, as it was serving neither of us on any level, intellectual, political or sexual.

Another excruciating 15 minutes passed. We had both enacted the social obligations required for our “date”. I polished off the last of the biryani, We both stood up at the same time, pushed our chairs back. I shook his hand as nonchalantly as Nasir’s had been,. I turned to leave rueing another wasteful discussion and a date gone awry.

Just after I took a few steps, I heard a soft voice behind me. “Thanks, I have learnt a lot from you. You know? I have a relation with a boy from my community but it is so difficult in our society. But I am not going to leave him. If I need, will you help me out? Please? ” Nasir’s face had lost all his arrogance. He looked vulnerable and childlike, a confused and scared human being.

“And yes, I am going to walk for my rights on 13th December,” he shocked me with yet another commitment.

Turning around I gave him a tight hug, holding him and wishing him nothing but a good and happy life. He clung on to me like a child who had finally met someone to trust. Slowly we moved apart, and holding his head with both my hands I planted a soft kiss on this forehead. His eyes glistened with tears.

We humans write off people so easily. We underestimate the intelligence and sensibility of people who are not like us, educated or in a different social strata. But the humanity that binds us all transcends all of us regardless of religion, gender, caste, social mobility or anything that makes one unique and unlike the majority.

As I walked away, I could not help smiling to myself, even as my eyes grew misty. This was one of the best dates I had ever had. I had a spring in my step as I realised that all is not lost.

In fact, the struggle is far from over and I am ready to do what it takes to win for myself, for the Nasirs in the world, for all minorities criminalised by Section 377, and indeed for all oppressed people everywhere.