How I Came Out To My Sons 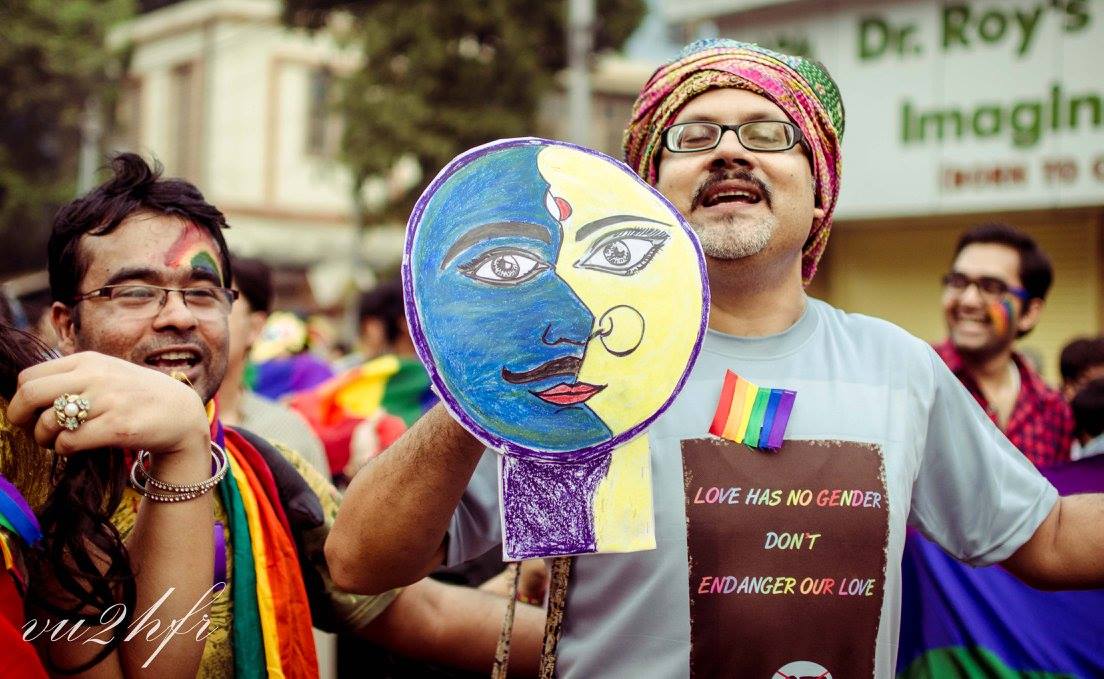 It was already half past twelve and I was getting impatient, not wanting to be late to the much anticipated 14th Kolkata Rainbow Pride Walk, meet my fellow organizers of the event who were also pioneers of this historic walk. Secretly, I was eager for another reason. Maybe, just maybe…I would meet a lovely and handsome hunk at the walk…

For my first pride walk, I had tried on many outfits, before finally settling on a gray T-shirt emblazoned with a bold slogan, and black jeans. A classic Santiniketan style multicolored scarf completed the outfit and I was glad for the comfort it gave me. After all Santiniketan is my home town.

“Are you ready? I am. Let’s go soon or you won’t be able walk the entire route.” My wife was already dressed for the Pride Walk, and she looked beautiful. .

“Papa, where are you going today? Is there a party?” asked Rishi, my younger son, as he looked at my official Pride Walk T-shirt.

“I am going to attend Kolkata Pride Walk”

“What is going to happen there?” Rishi did not miss a beat.

“We will walk for our rights. There will be lots of remarkable men, women, people from the LGBTQ community, like me. I have told you about it so many times, no?”

My elder son Raju looked at my T-shirt and read out aloud “Love has no gender, don’t endanger our love, No to 377”.

I looked at him and added, “There will be music also and I am going to dance with a handsome uncle afterwards”.

“Please papa, do not try to dance. I don’t want you to look like a fool”. Rishi giving me sage advice, sat down on the bed with his iPad.

Raju sitting next to Rishi, pretended to read. I quietly set myself between the two children. Rishi put his head down on my lap, as he always did. I played with his disheveled hair remembering a day more than a year ago…

The rain and gloomy skies reflected the state of my mind, overcast with anxiety and fear. Durga Puja that year had arrived a little earlier and for some reason the charm had not yet set in.

Both boys were just waking up but already had their agendas ready for the special day.

“Papa, aren’t we going to see the Puja pandals today?” Rishi asked with some concern.

Raju was more confident as he demanded,“You had promised to take us to see some of the famous Puja pandals in North Kolkata”.

My mind on the other hand, was worrying about the revealing update I had posted on my new Facebook page. Looking at their innocent faces, I knew this was not the moment to tell all. My news would have to wait.

I quietly got up from the bed, feeling dizzy, my heart heavy like a stone. I was already exhausted from lack of sleep the night before. This was how it had been for many years. Each night my tormented mind would keep sleep at bay as I tossed and turned. Even when I slept with my two most precious jewels, my darling sons, one on each side of me, I could not find peace.

About four months ago I met Pritam (name changed), a dashing handsome hunk fifteen years younger and fell madly in love. I had already embraced my sexuality and was exploring a new lifestyle with Pritam and wanted to see him as much as I could.

At first my being away from home was not an issue. I had told my wife about Pritam shortly after I met him. But after a few weeks, it became harder to explain my long absences. But whenever Pritam’s name came up, I stopped short always of coming out, and revealing my orientation to my sons. Raju and Rishi were my last connection to the part of myself that kept me sane. I needed them in my life, I needed them to love me and adore me like I loved and adored them. That was the only way I could keep going instead of losing myself completely. As the rain stopped, we went pandal hopping and it lifted their mood. When we went home and got into bed, with Rishi on my right and Raju on my left, I started thinking about how I always found a reason not to come out to my sons.

I sat up and shook the sleeping boys awake. I felt like I was in a dream and that if I wanted to see it through the end I had to say what I wanted to say because any moment the dream could break.

Mustering all my courage I said, “I wanted to tell you something”

“Oh, about the Pujas we visited? They were amazing, no papa?”

“No, not about the Pujas we visited”.

“Then do you want to tell us a story of your childhood?”

My heart started pounding, my body turned rigid and I was drenched with sweat. Raju could feel my uneasiness.

“Are you feeling pain in your chest like last time? Let me call Mamma.”

“No! I just wanted to say that I am Gay,” the words just flew out from my mouth in desperation. There were a few minutes of silence. Rishi probably understood nothing.

“Papa can you kindly explain?” Raju’s voice had an unmistakable agressive note.

“You know beta, everybody wants to love, be loved, but it is not always that a man only falls in love with a woman. A man can fall in love; feel the same passion, the same craving for a man also. At the end of the day it is just a normal love or relationship between two persons.” With all my limited knowledge I tried to explain the meaning of the term “gay” to the two silent listeners.

“Papa, then why did you marry mamma? Didn’t you love her?” 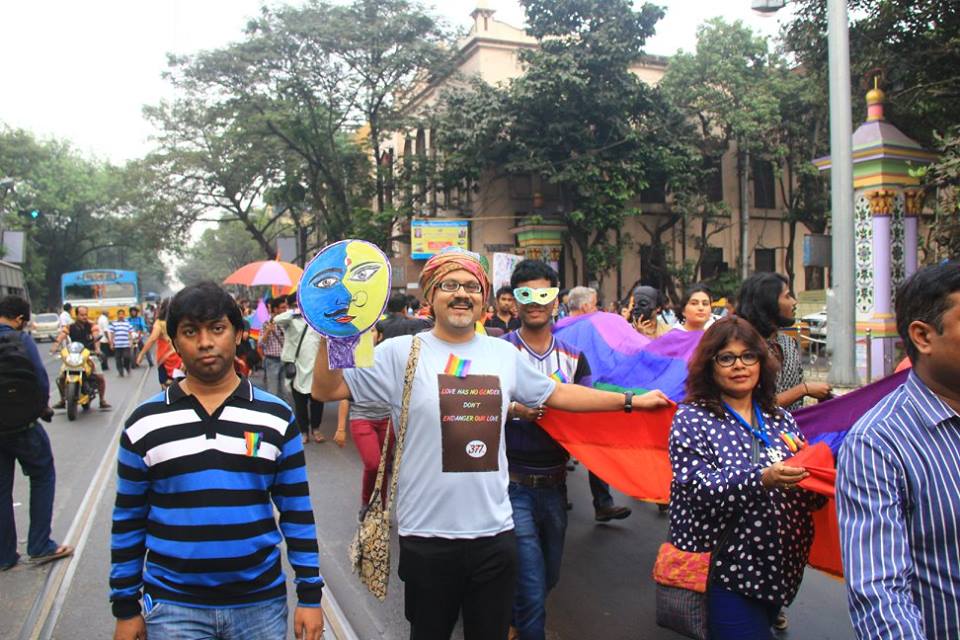 I always knew that this innocent question would come. But when I actually faced it, a deep sense of shame overtook my mind. I had never felt so helpless in my life. My voice choked, my brain stopped working.

Looking at the darkness I slowly started, “Yes, Raju beta, it was probably a mistake on my part to marry your mamma, but I had told her about my orientation before our marriage. But she insisted on moving forward with the marriage plan. I think she did not fully understand what I was telling her about myself. It became clearer and clearer to me, that this was indeed the case, as days went by and we both could not fathom the extent of complications in this situation. But I still love your mamma, I care for her, try to support her in every possible way. Only I can’t love her as a man loves a woman. Understand beta?”

“You know I was always shy and an introvert. I had no friend or mate to whom I could open up about my sexual orientation when I was young. You have seen Dadaji, no? He was so strict and orthodox that I did not have any room to explore myself. Somehow I could not develop any relationship with anyone; in fact I did not know anyone who was openly gay. You have seen Arup uncle, no? He used to be my closest friend and after hearing my confession that I was gay, he thought of the most fruitful way to cure me and make me “normal” by introducing me to your mamma and arranged a love marriage.”

Even at that distressful moment, as I was coming out to my sons, I could not stop smiling silently when I recalled those early days. So many gay persons like me have gone through the same experience to avoid the stigma of the society and have remained closeted in the darkness of their mind.

“Though I did not fall in love with your mamma, I cared a lot for her, enjoyed her company and cherished her simplicity, her whole-hearted love,” I slowly said, my mind traveling back in time to when I was just 26 years old. I thought about those unforgiving nights which left both of us emotionally drained and how much we had to pretend, to project the picture of a happy couple to our relatives. I thought of those days when the boys were born and how they became the cornerstones of my life.

The children remained silent. A deep sense of fear gripped me. Probably I had taken a wrong decision; they were going to hate me from now on.

I felt numb with fear and still did not stop. I murmured, “I cannot lead my life wearing a mask any more, I could not tolerate the depression and severe loneliness. Can you understand? I am sorry, but this is the truth, and I always thought that being the closest persons to my heart you two should know this”. Tears flowed down my cheeks silently. The noise of heavy rain mirrored the turbulence inside me. In the cocoon of darkness, with the incessant rain, time seemed to stop for me.

“Papa, e baba, you are gay! But you are my best friend, my best papa in the world,” Rishi softly uttered, wiping the tears with his small hands.

Raju held me tightly ,“That’s why you are so happy with Pritam uncle around, I now understand.” Something just broke inside me. I was crying inconsolably, but with so much relief.

I was jolted into the present, by feeling two pairs of eyes boring into me and evaluating me with intense disapproval.

Both the boys were scrutinizing me critically, just like the family of a bridegroom looks at the prospective bride, searching for defects as they check her out.

“Papa, who are you going to meet in the walk? See what you are wearing; you are just looking like our granddad. Better wear that darktassarkurta, that chocolate brownish one, it suits you. And for God’s sake why don’t you color your white beard? If you look like this, don’t expect any handsome uncle to fall in love with you, huh,” both scolded simultaneously.

They already knew that I had broken up with Pritam. It left me stumped.