“The Shape KASHISH Took Was Beyond Our Own Expectations” 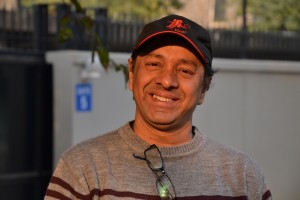 From providing a spring board to budding Indian filmmakers to nurturing talent, in its third year KASHISH Mumbai International Queer Film Festival had an entertaining mix not just for queer persons, but also their family and friends; says Festival Director Sridhar Rangayan

Gaylaxy: How has the third year of Kashish been?

Sridhar: When we started KASHISH in 2010, it was based on a simple fact that there was no queer film festival in Mumbai and there needed to be one. But the shape KASHISH took was beyond our own expectations. I mean we dreamt big, but it was bigger. It became the first queer film festival in India to hold a festival in a mainstream theatre, secure Information and Broadcasting Ministry clearance, have a very eminent and supportive jury, was attended by big Bollywood stars and we had more crowd than we could accommodate.

In 2011, we thought we had it all planned, with a 230-seater cinema hall; but we still couldn’t accommodate everyone. The festival got Bigger, Bolder and Queerer, with more people, more celebrities and more media coverage. We even invited and hosted three filmmakers from US, UK and Indonesia. While the first year was primarily supported by organizations like UNAIDS, UNDP and Movies That Matter, the second year saw the collaboration with a corporate sponsor – DKT India.

This year, 2012, was more challenging because the expectations sky rocketed, not just from the queer community in Mumbai and across India, but also from the queer and filmmaker circuits all over the world. When you are in the spotlight, it is not very easy, you have to perform to the best.

We received about 300 film entries, the highest till date and interestingly we received more qualitative films. This made the final selection tougher. The preview team and the Festival Programmer finally selected 120 films from 30 countries to screen this year. The films made everyone giggle, laugh, cry, dance and also ponder.

Gaylaxy: Can you tell us something about the festival tagline `For Everyone’?

Sridhar: One of the primary objectives of KASHISH is to mainstream queer visibility. The festival is as much a platform for queer celebration as it is for non-queer people to come and watch films on queer subjects.

One of the constant questions that we still get is – who are these gay and lesbian people we hear a lot in the media these days, what do they look like, what do they do? Are they interested only in sex, are they only activists? The films at KASHISH answer many of these questions – that gay & lesbian persons are just like any another human being, as ‘normal’ as anyone living in your own house or working in your own office; they have the same anxiety, happiness, hope, aspirations, dreams as anyone else. They are definitely not from Mars or Venus or an alien planet.

The KASHISH audience feedback survey yielded very interesting data. In 2010, 27% identified themselves as non-queer and this figure rose to 34% in 2011. In 2012 we hoped to make it an equally participative event for both queer and non-queer persons with the theme ‘For Everyone’.

With this theme, we invited parents, friends, colleagues, classmates of queer persons to come to the festival. We also made a special effort to program films and have panel discussions that not only deal with gay, lesbian, transgender themes, but also those that relate to families and friends of queer people.

Gaylaxy: What about the presence international filmmakers in the festival?

Sridhar: Last year we invited and hosted Q. Allan Brocka from USA, Rikki Beadle-Blair from UK and John Badalu from Indonesia. This year KASHISH was privileged to host well know American filmmaker Rob Williams whose films, like Make The Yuletide Gay, have already been seen in Mumbai and have proved to be extremely popular.

Rob Williams is regarded as one of the most prolific gay filmmakers. He and his partner Rodney (a screenwriter and co-producer) have made evergreen festival hits dealing with the politics of human relationships, pepped up with an attractive and talented cast and interesting scripts.

KASHISH 2012 showcases his three features, from his debut featureLong Term Relationshipto his later productions,Make The Yuletide GayandRole/ Play. A short film written by him –Regrets, is also screening in the short film package,Crossed Paths.

Also, very interestingly we had filmmakers from Australia, USA, Thailand and UK joining us on their accord, because they just want to be part of KASHISH! There were more than two dozen Indian filmmakers, not just from Mumbai, but also from Bangalore, Chennai, New Delhi and other cities making their way to KASHISH to present their films.

Gaylaxy: What was different at this year’s festival?

Sridhar: Debut films! This year we have shown a record 40 films from first time filmmakers, both from India and all over the world. Two feature films by debutant directors dealt with issues of (in)compatibility in a gay relationship in two different ways – whileMen To Kiss(Germany) about a earnest banker and his bubbly flamboyant lover was a rom com,The Last Round(Chile/Argentina) about a successful macho boxer and a quiet shy kitchen assistant was an extremely sensitive drama.

A film that pushes the boundaries of queer culture was Jake Yugna’s multiple award winning filmOpen(USA), a visually striking and emotionally tender tableau of humanity’s progress at the dawn of the new millennium, where a pandrogynous couple are undergoing surgeries to become unified as one being. Two documentary features Austin Unbound(USA) about a deaf mute male-to-female transgender andRites of Passage(USA/India) about an Indian Muslim woman in USA going through sex reassignment surgery brought about harsh realities for transgenders into sharp focus.

The debut short films were more diverse where the characters, the settings and the unexpected twists in the plot made you sit up and giggle, laugh or cry – from funny fleeting encounters in a laundromat (No Clothes), in a park (Your Warmth) or a tourist spot (Cylicity); to poignant dramatic encounters (Silences and Stay) or even to a terrorist encounter inManhunt.

Gaylaxy: What is your aim for Kashish?

Sridhar: KASHISH seems to be emerging as a springboard for new talent and the international film community seems to have their eyes riveted on our festival to discover new directors and new films!