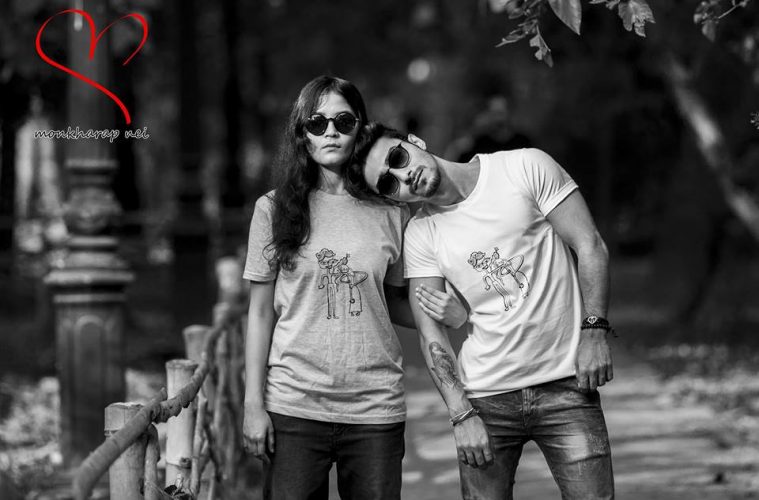 I was scrolling down my newsfeed on Facebook the other day only to chance upon Archan Mukherjee’s catalogue presentation for a garment label, ‘Mon Kharap Nei’ (Not in a Bad Mood). The label is owned by Koyel, who is an independent doodling artist and has integrated love for art with the fabric of the garments in a harmonious synthesis. Koyel’s art, however, is not just about dexterous strokes of the brush but thoughtful strokes of the pen too. They say that the pen is mightier than the sword and that is only reinstated in Koyel’s works, each of which drives home a ‘thought-tornado’(or precisely so).

I have known Archan as a photographer for quite sometime now. However, the catalogue caught my eye primarily because of the striking note of positivism and resilience that it put forth in its name. ‘Mon Kharap Nei’ almost seemed like a make-believe phrase which stood in stark contrast with the fractured times in which we are living. I could therefore not resist the temptation of going through all the works of the catalogue presentation. What was discomfortingly pleasant to me was the brash cynicism which was woven into and made part and parcel of every narrative put up on display in black and white frames. Yet herein lies the ingenuity of presentation whereby one frame negated its monochromatic existence by screeching out loud, ‘Life is not just black and white’. The irony is too stark to be missed and it is this self-contradiction which makes this particular frame a daring voice of acknowledgement of multiple realities,of undoing and subversion. 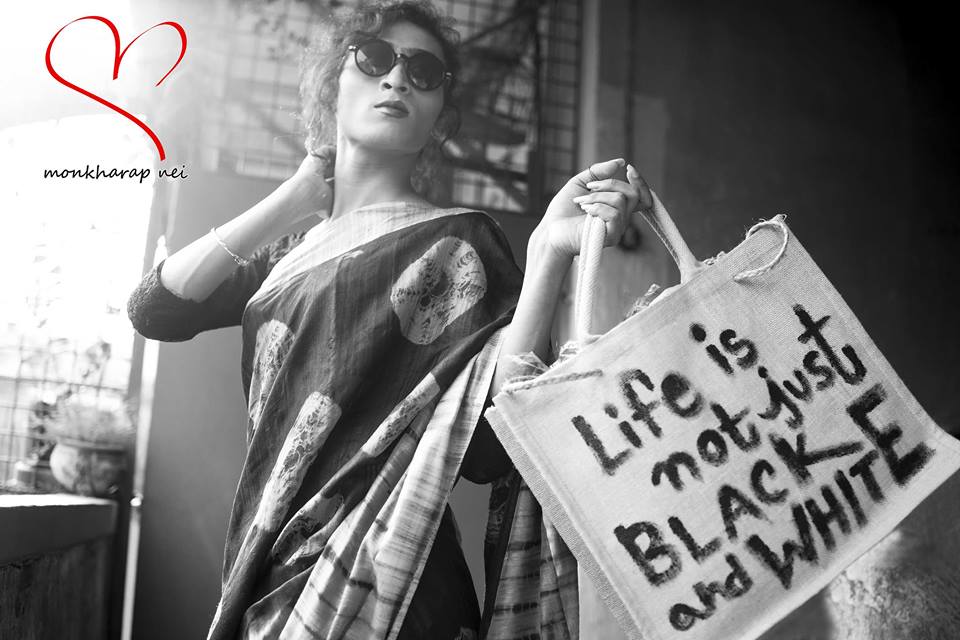 The ‘Swachh Bharat Ambassador’ is only a mockery with regard to the ‘not-so-swachh’ surroundings around him. The grime, the dirt and the stench of filth, very literal and artless, can be felt on one’s pulse ; such is the compelling nature of the visuals. 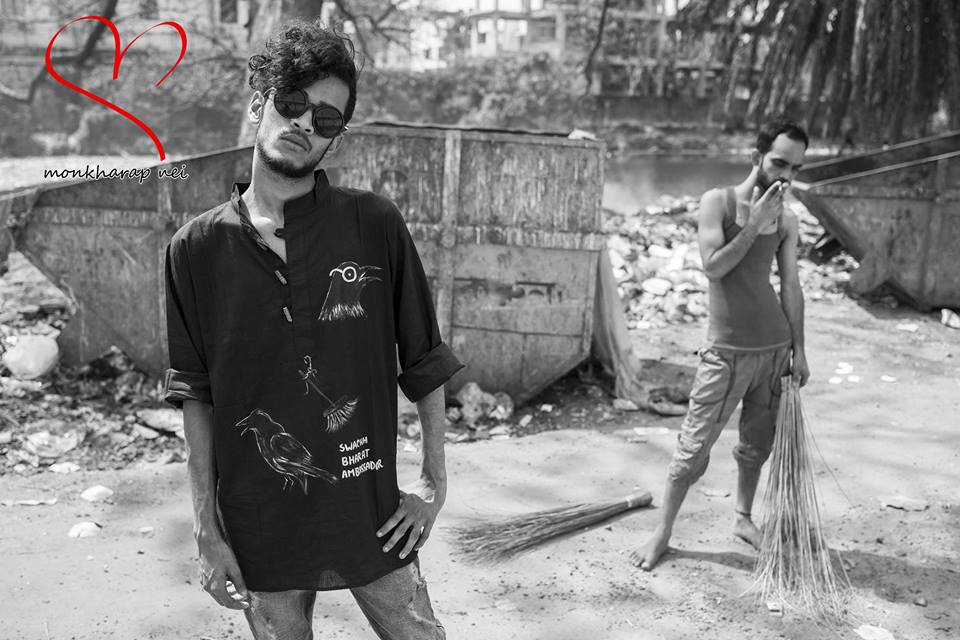 Headphones plug the ears of a model with a flute in hand and the caption on the T-shirt runs thus – ‘I am not listening to you’. Quite interestingly, the ‘you’ in reference maybe an other in the very literal sense, a collective other, to whom the weary soul has turned deaf ears. By a metaphorical extension, deaf ears can be turned to the call of one’s own self, of which the flute maybe a symbol. Perhaps the underlying connotation remains that in a bid to escape the weariness of the world, we exhaust ourselves too much to dance to the rhythm that we can create for ourselves. An old man reads at a distance and he has earphones plugged into his ears too, where the possibility of a dialogue between the two characters is lost. 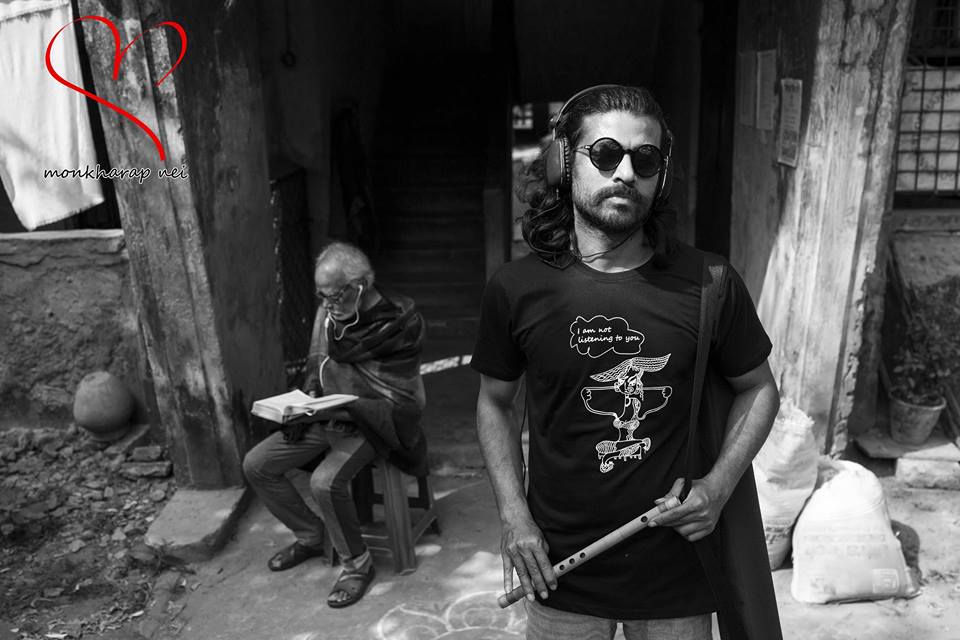 A man nestles his head on the handsome and sturdy shoulders of his partner to seek comfort and breathes a respite from the conventional recitals of masculinity and stereotyped performance of gender roles. 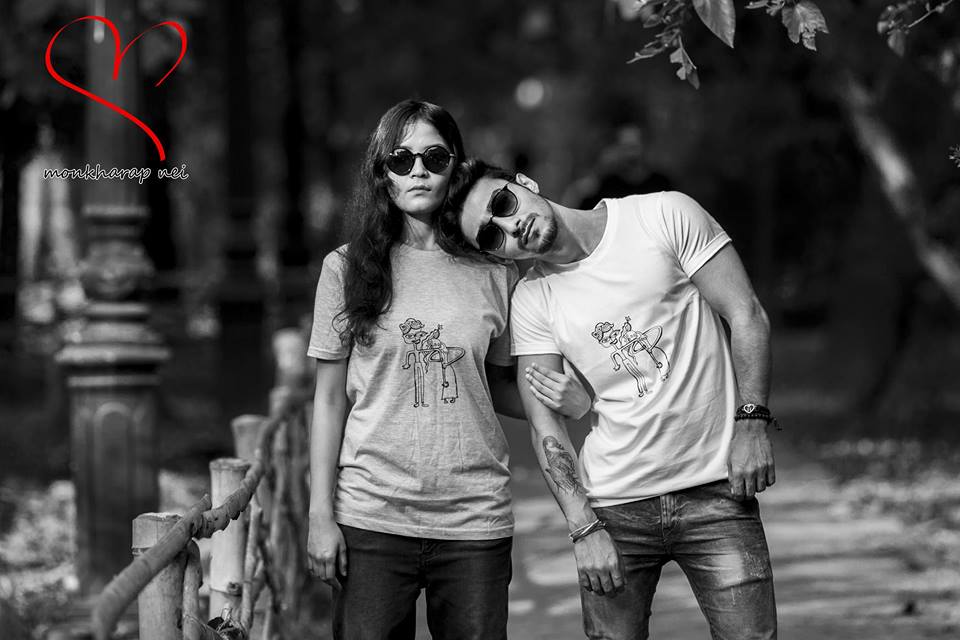 Head hung in remorse, a bare-chested rider, probably vulnerable and violated, seeks refuge in ‘Duhshason-er Saree’, but to no avail. The saree barely soaks up his tears without redressing the cause and brushes aside the violation with a beautiful stoic indifference; the often overlooked issue of male sexual abuse may find a place here. Let the roles switch and the perspective is another refreshing one. With reference to ‘Duhshason’s vastraharana’ of Draupadi, a Draupadi standing on the brink of contemporary times feels empowered in the knowledge that it is not hers to bow down in shame. She throws the anticipated agony of a victim to the winds knowing that it is the due of the perpetrator. 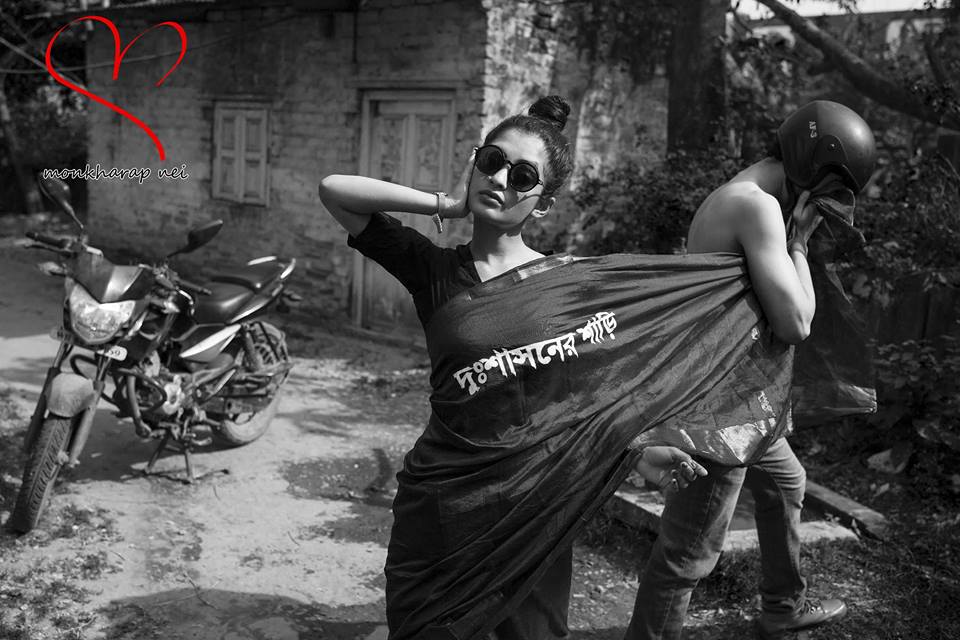 There are more frames to explore in the catalogue and I have presented a handful which I found tremendously stimulating to engage with. The multiplicity of meanings and the layers of understanding that each frame evokes is something which can be looked upon as a hallmark of the presentation. It comes with a gusto of fresh thoughts and relevant perspectives pertaining to the burning issues at hand, which the viewers can figure out for themselves. I diligently do not want to create a structured protocol by enumerating the issues it explores and do injustice to the assortment of parallel narratives that most of the frames contain. To end with, I would just like to say that Archan has taken up the lens as his weapon for a social critique and I believe that the product will surely manage to create a resonance with its audience.

Aritra Chatterjee
Aritra Chatterjee is a student ofpsychology at University of Calcutta.He likes to engage with discourse that addresses queer lives and non-normative identities andbelieves that art can be a powerful medium to subvert anddeconstruct patriarchal recitals in the process of creating more unconditional alternatives.