Archbishop Of Bombay: Wrong To Say Those With Other Sexual Orientations Are Sinners

Replying to an email about a sermon given out at a Gorgeaon Church condemning homosexuality and gay marriages, the Archbishop of Bombay has said that “the church loves everybody, even people with different sexual orientations” and it is wrong to say that those with other sexual orientations are sinners.

The priest at St Thomas Church Goregaon on July 28th had given a sermon which decried homosexuality and gay marriage and called homosexuality as a “great sin”.  A few gay members who had attended the Church and listened to the sermon were shocked and then decided to write a letter to the Archbishop. “I was livid by some of the observations and thought it essential that the community doesn’t take such things lying down,” told Sibi Mathen, who was present when the sermon was delivered.

In his reply, Archbishop Oswald Cardinal Gracias wrote, “I write to assure you that the Church does love everybody, even people who have different sexual orientations.” However, he supported the priest in his views against gay marriage. “The  Church does not accept gay marriage because the Bible teaches us that God willed marriage to be between man and woman.” He then said that it was wrong to call gays as sinners. “On the other hand, to say that those with other sexual orientations are sinners is wrong,” he wrote. The Archbishop also said that one must be sensitive as to how they speak in public and promised to speak to the priests.

Pope Francis had also recently told the media that it was wrong to judge homosexuals. “If someone is gay and seeks the Lord and has good will, who am I to judge?” he had said. Satisfied with the reply, Mr. Mathen told Gaylaxy, “Its a victory for the entire community.” 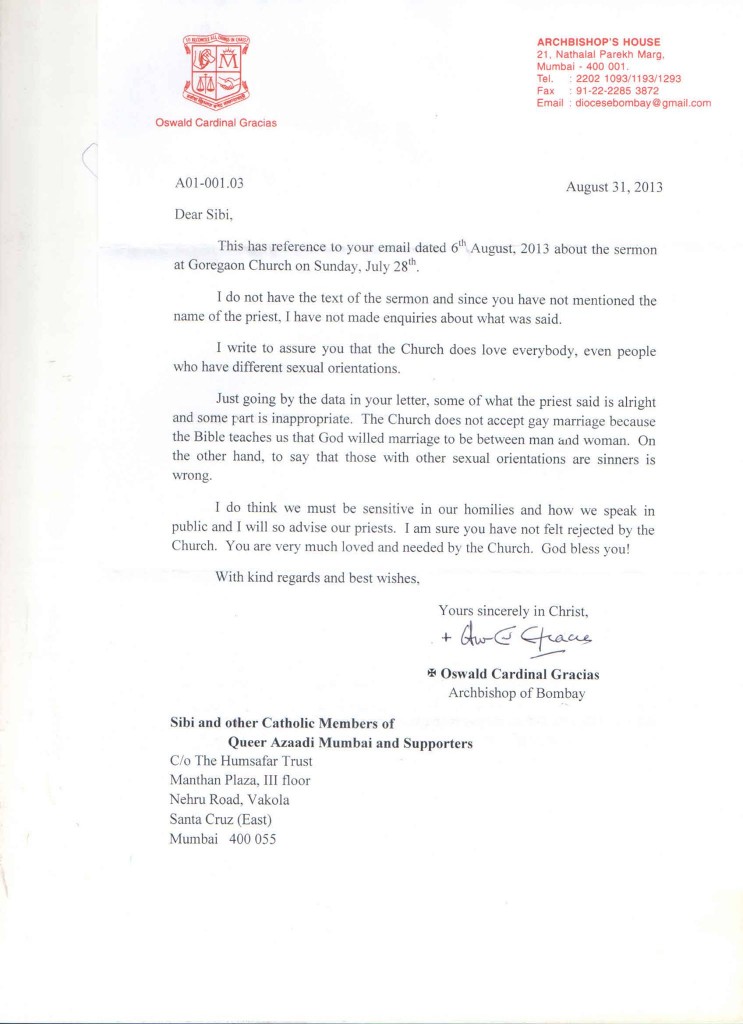