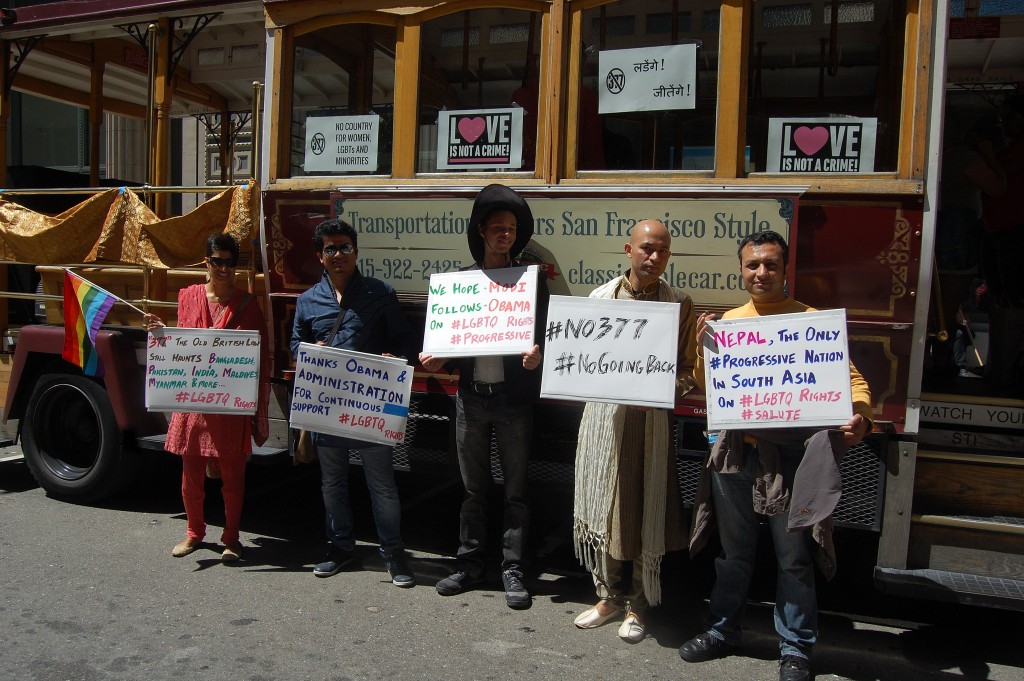 Activists marching in the San Francisco Pride have called for India’s Prime Minister Narendra Modi to overturn Section 377 of the Indian Penal Code which criminalizes same-sex relations. Over 40 activists, belonging to groups working for the rights of South Asians in the Bay Area marched the Pride calling for an end to the colonial law, which was reinstated by India’s Supreme Court in December 2013.

Members of Trikone, an organization working for the rights of LGBT South Asians in the Bay area said, ‘Trikone encourages Prime Minister Modi to strike down Section 377 because this law violates an individual’s right to privacy, equality, and life with dignity. We stand with the multitude of groups in India calling for an end to this regressive colonial law.”

The Alliance of South Asians taking action (ASATA), a volunteer group in the Bay area working for South Asians against racism and exploitation said, “The harshest effects of 377 are often felt by those who also hold other marginalized identities, often on the basis of caste, class, and gender discrimination. Repealing Section 377 would be a step towards a country that abides by the principles of constitutional morality set by its founders”.

Such a view of marginalized LGBT community members in India struggling to find a voice in the mainstream discourse was also re-iterated by the Association for India’s development (AID), a US-based organization supporting grassroot level initiatives in the field of sustainable and equitable development in India. They stated: “Many LGBTQ individuals who are part of movements for land rights, Adivasirights, and environmental justice are sometimes invisible as LGBTQ people, which further deprives them of rights and resources from their larger communities. The punitive use of Section 377 will affect particularly harshly, those communities that are doubly marginalized by their sexuality and socio-economic circumstances, such as many hijras, sex workers, and the working class.”

The Supreme Court of India’s judgement re-instating Section 377 left it to parliament to decide on its fate. The ruling BJP, which has a decisive majority in the Indian Parliament, has thus far refused to take a stand on Section 377 post its election victory, even as it had supported the verdict in December stating that it believed homosexuality was ‘unnatural’. Party leaders have maintained different positions on 377, with some toeing the official party line, some calling for a rethink and some refusing to take a stand. Prime Minister Narendra Modi continues to maintain a studied silence on his views on Section 377.