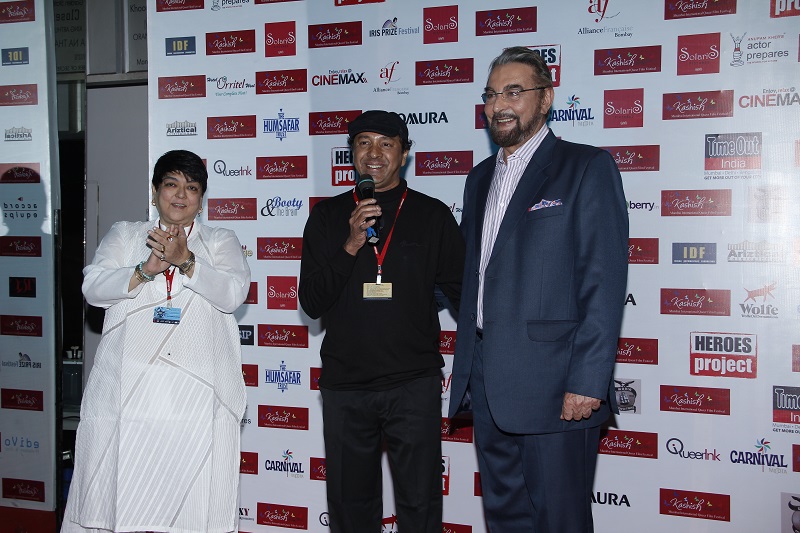 Festival Director Sridhar Rangayan says, “I cannot even say this is a dream come true because we never even dreamt of something like this! When we started KASHISH, we just wanted to provide a platform where everyone could watch international quality gay and lesbian films without shame or fear in a mainstream space. We never ever thought our festival will grow so big in just four years. It is absolutely the hard work of our organizing team and volunteers and the great enthusiasm and support of the audiences. KASHISH not only celebrates good cinema, but highlights hopes, desires, struggles and victories of the LGBT communities around the world. KASHISH is our way of raising the rainbow flag high above proudly.”

In its citation, the magazine says, “Kashish means attraction or allurement in Urdu — a word we’d like to incorporate into our vocabulary.”

“We are truly humbled and happy that our efforts are acknowledged and appreciated on a global platform. While KASHISH being in the top five Coolest LGBT Film Festivals will surely boost up our morale, we take this opportunity to thank our partners, supporters and Indian queer community whose synergy has taken KASHISH to these heights and hopefully will continue to do so in the coming years!” said Saagar Gupta, Director of Programming.

MovieMaker, which has been publishing its annual list of coolest film festivals from around the world every year, decided this year to add niche categories like Documentary and Horror/Sci-Fi Festivals, Short Film and Comedy Festivals and Environmental/Social Cause /Women’s Film Festivals, LGBT and Ethnic/National Film Festival and asked their readers to nominate and vote for what they see as the coolest. The definition of coolest was seen as a combination of quality cinema, great parties, alternative venues, shoestring-budget, hyper-indie films, the opportunity to gawk at celebrities and connect with fellow movie makers – a mix that they might not get to see anywhere else! Over four months, they received more than 15,000 votes and used a specialized visual survey platform to finalize the audience favourite winners. KASHISH was the only Indian film festival to be featured in the magazine’s annual coolest film festivals list.

The fifth edition of KASHISH is scheduled to be held from May 21 – 25, 2014. Film submissions have already opened and the festival hopes to bring a larger program of qualitative LGBT themed films. KASHISH is the first and only gay & lesbian film festival in India to be held in a mainstream theatre and the only queer festival to receive clearance from the Ministry of Information and Broadcasting.

The four successful editions held in 2010, 2011, 2012 and 2013 have screened around 110-132 films from 25-40 countries every year. The festival has been supported by a number of Bollywood celebrities, filmmakers, actors and writers, as well as many international filmmakers and film festivals.