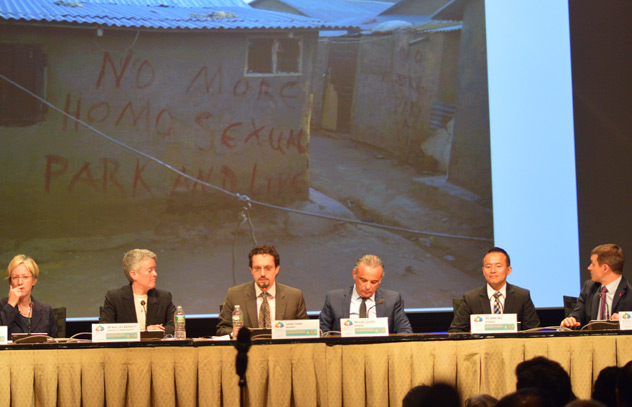 A new study suggests that the cost incurred by countries due to homophobia could be a big burden on their economy and puts the figure at $31 Billion for India. The study, presented at a forum of the Wold Bank by Dr Lee Badgett from UMass Amherst, one of the major public research universities in America, highlights that in India, where homosexuality has been re-criminalized and no protective legislation exists for lesbian, gay, bisexual and transgender (LGBT) people, it is estimated that up to 1.7% of GDP is lost in one year due to homophobia and exclusion of LGBT. The loss of labour productivity and output because of employment discrimination and the loss of life years due to early death or disability could generate costs of up to US$ 31 billion in India.

The study developed and tested an economic model to measure the cost of excluding sexual minorities. “Economist Lee Badgett, developedtwo estimatesbased on different assumptions about how many LGBT people there are in India — one assuming 0.6 percent of the population, the other, 3.8 percent — and found the Indian economy lost the equivalent of anywhere between 0.1 and 1.7 percent of its GDP,” reported Buzzfeed. “You reduce GDP by that much and you call it a recession,” Badgett told Buzzfeed.

World Bank organised a panel discussion where the participants discussed the findings of the study. The panellists also debated the broader implications of a new wave of punitive legislations being passed in countries around the world. The discussion was facilitated by Lester Feder fromBuzzfeed. Panellists highlighted the need for continued stronger data and evidence on the impact of exclusion for development as well as the continued need for the mobilisation of the international community to protect marginalised groups from being excluded from development and health.

“Protection of human rights and empowering people are important for strengthening economic outcomes and sustainable development. The study on the economic cost of homophobia towards LGBT presented today that we have supported, is a clear example of how important it is to start looking at the economic implications of homophobia and exclusion to better inform how we can work on poverty reduction and inclusive development,” said Ms Satu Santala, Executive Director for Nordic and Baltic Countries, Member of the World Bank Board of Directors. Dr Luiz Loures, UNAIDS Deputy Executive Director and Assistant Secretary General of the United Nations, said: “Punitive laws are affecting our efforts to end the AIDS epidemic and are impacting countries’ economies. Inclusive, rights-based responses are the hall-marks of the AIDS response and offer platforms on which to build. We need more evidence and data to convince policy makers and politicians about the need to address LGBT issues and homophobia, to ensure protection of human rights and equity in health and development.”

“Excluding sexual minorities is not only a human tragedy but it is also a significant self-inflicted economic wound, and so we at the World Bank need to listen to their voices,” told Mr Fabrice Houdart, Team Lead, Sexual Orientation, Gender Identity and Development, World Bank and chair of the event.