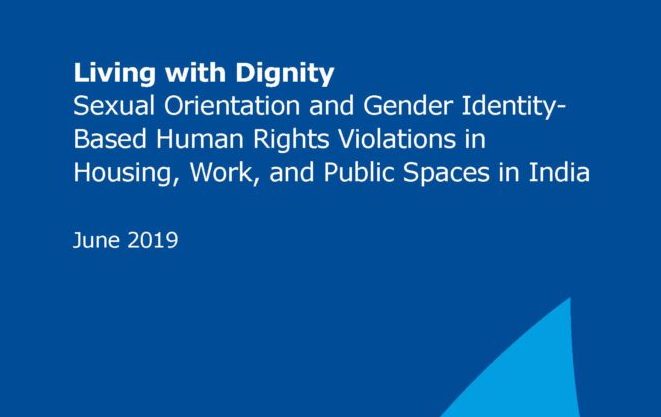 The Indian Government must give effect to recent rulings of the Supreme Court and end discrimination and other human rights violations and abuses based on real or perceived sexual orientation, gender identity and expression, the International Commission of Jurists (ICJ) said at the Delhi launch of its new report on 8th June on the conditions of LGBTQ people in India.

The ICJ’s 152-page report, ‘Living with Dignity: Sexual Orientation and Gender Identity-Based Human Rights Violations in Housing, Work, and Public Spaces in India’, details human rights violations suffered by LGBTQ persons in their family homes, workplaces, and public spaces including streets, public toilets, public transport and shopping centres. Following on the Supreme Court’s decisions in NALSA and Navtej, which strongly affirmed the human rights of LGBTQ persons, the report identifies legal and policy challenges, as well as structural barriers that prevent them from enjoying the full range of human rights.

“Despite the promise of recent jurisprudence, the Indian government has not consistently met its constitutional and international obligations to guarantee the rights of LGBTQ persons,” said Frederick Rawski, ICJ Asia Director. “The ICJ encourages the Indian State to build on existing efforts to protect these rights to ensure full compliance with the right to live with dignity in terms of the Indian Constitution and international human rights law.”

Noted lawyer Anand Grover, in his keynote speech batted for gender neutral rape laws, and also pointed out the contradiction between POCSO Law and other rape laws. Anand pointed out that POCSO is gender-neutral, however rape laws for adults are not, and this affects trans women badly. He also stressed on the need for all minorities to join hands and press for a comprehensive anti-discrimination law.

A panel discussion with lawyers and trans activists as panelists too was held. Tripti Tandon, a layer with Lawyers Collective, urged people present to think as to what do we want when we talk about an “anti-discrimination law”. Do we want everyone to be jailed, or do we want something else from such a law. Sowmya Gupta, a transgender activist, highlighted the hardships that trans people face in finding home, and the violence they suffer in their families. She also pointed out that the Transgender Rights Bill doesn’t address the issue of shelter homes for trans people, or issues around their housing. Other panelists included Santa Khurai, a trans activist from Manipur, and Mihir Sharma, a lawyer.

The Living with Dignity report identifies a wide range of violations and abuses of rights in the context of housing, work and public spaces. Human rights violations associated with housing included discrimination in accessing rental accommodation, harassment and violence by landlords and by families, and arbitrary evictions. The report sets out instances of discrimination in the workplace, at all stages of employment, and throughout the formal and informal sectors.

It also documents obstacles faced by LGBTQ persons seeking access to public spaces, including discriminatory policing, gendered toilets and transport, harassment and abuse by State officials, and discriminatory targeting through the application of public nuisance, sex work and anti-beggary laws. The report offers a set of recommendations meant to make existing law and policy more protective of LGBTQ persons’ rights and calls for the amendment or repeal of certain existing laws.

“There is no single law or policy solution to ending long-standing and systemic discrimination. But legal and policy reforms are essential to addressing the abuses suffered by LGBTQ persons and these must include the effective, inclusive and meaningful participation of a diverse range of LGBTQ individuals and advocacy groups,” added Rawski.

The report also recommends the convening of a nationwide consultation geared towards the enactment of a comprehensive anti-discrimination law prohibiting discrimination on the grounds of sexual orientation and gender
identity as is required by international human rights law.

In a preface to the report, ICJ Commissioner and former Chief Justice of the Delhi High Court, Justice Ajit Prakash Shah, indicates his hope that the report will “be used as a tool by lawyers, human rights defenders and policymakers” and “contribute to enhancing public discourse on LGBTQ rights, as well as broader issues of discrimination and the rule of law in India”.