Ontario Premier Kathleeen Wynne, who visited Golden Temple today, was not honoured by the traditional Siropa (robe) by the Shiromani Akali Parbandhak Committee (SGPC), the highest decision making Sikh body, because of her stance on same-sex marriages. Wynee is openly lesbian and a staunch supporter of same-sex marraiges.

Earlier today Hindustan Times had reported about the decision of SGPC to not honour Wynne with Siropa. The report mentioned that Sikhs in Canada were particularly opposed to Wynne’s pro-gay stance and her decision to “introduce sex education curriculum which, according to them, was not age-appropriate and promoted same-sex relationships among school students”. In 2014, she had also not allowed turban wearing Sikhs to ride motorcycles without wearing a helmet.

Wynee had told Canadian daily Toronto Star that homophobia isn’t surprising and despite everything, she will still visit the Golden Temple

Punjabi Newspaper Tribune reported that Wynee visited the Golden Temple today, and was given a gold-plated picture of the Gold Temple and copies of Sikh scriptures, instead of the Siropa by SGPC chief secretary Harcharan Singh at a private ceremony at which the media was not invited. 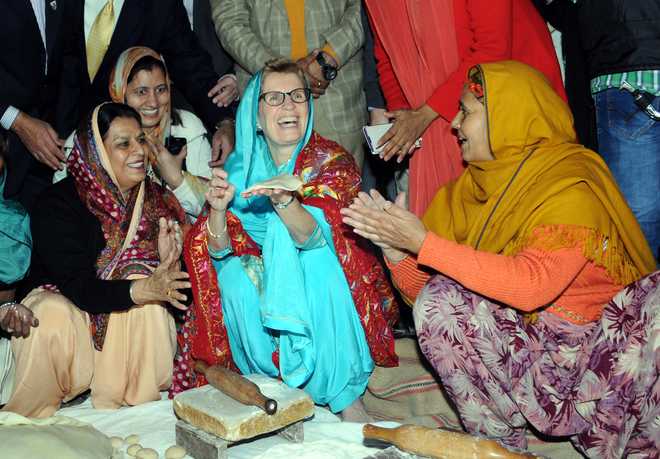 Ontario’s Premier Kathleen Wynne (center) make a chapati at the langer hall during her visit to the Golden Temple in Amritsar on Sunday. Tribune photo: Vishal Kumar