Review: ‘The Tree Outside My Window is a Drama Queen’ by Avinash Matta 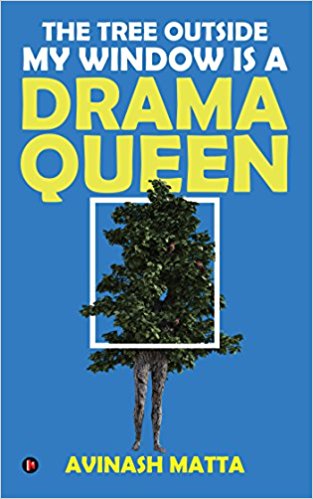 The paint doesn’t move the way the light reflects,

So what’s there to be faithful to? I am faithful

In his new book, the much awaited War of the Foxes, Richard Siken explores the nuances of act of creating art and its materiality, the age-old question of fidelity of art to reality, often using hayfields and similar landscapes as his setting. Much like Siken, though never as complex, Avinash Matta’s The Tree Outside My Window is a Drama Queen delves into the act of writing as a twin to queer love and heartbreak:

Our greatest act of love

Is not in caressing on bed,

Neither in sacrificing time,

Nor in buying material gifts,

But in writing poems.

The sixty poems in The Tree Outside My Window is a Drama Queen are short pieces, and can be read in bursts. They coalesce around nature, and in contrast, technology. Often, Matta’s poems speak of gayness and its proscription in this country. It is spoken of in what have now become familiar terms – the outlawing of homosexuality is a colonial remnant, and yet society too remains disagreeable to accepting fluid genders and sexualities. Rejection and acceptance, thus, run parallel in the world of the poems.

Along with sexuality, meditation on writing gets equal space in the book so much so that it becomes difficult to separate the idiom of sense and perception from the idiom of creativity

It’s only a blank page that is inviting.

It offers itself completely,

Avinash Matta’s poems sparkle when he adulterates the texture of writing with the touch and voice of a lover. The other more conventional images – of rose-filled gardens and autumn leaves – never carry the charge of poems like ‘Let’s Write Poems’ and ‘We were Destined’. Avinash spoke of being inspired by Pablo Neruda’s style and it shows how the young poet is influenced by Neruda’s entangled skein of nature, romance, and poetry:

And it was at that age … Poetry arrived

it came from, from winter or a river.

I don’t know how or when,

but from a street I was summoned,

from the branches of night,

abruptly from the others,

there I was without a face

and it touched me.

One of my favorite poems from the book is ‘What Else’ which encapsulates the ennui, the over familiarity of lovers who have been together too long (how long is too long?)

Have changed their colour.

From ‘I am excited today’,

And from ‘It’s raining outside’,

Queer persons find it difficult to find community, much less romantic relationships, and the burden to keep the romance going, even when you feel the so-what-else-nothing-much seeping in to ward off loneliness in a culture that rewards monoamory and punishes singlehood is a reality even in our so-called queer communities.

Literature exploring the everydayness of queer lives focus often on narratives drawn from a universalizing white, protestant, middle-class, gay narrative – thus, the confessional, ritualistic ‘coming out’, homosexuality as ‘sinful abomination’, gay marriage – are used over and over to draw emotional responses. Avinash Matta’s poems too rely on these tropes, shining only when he takes his art to nature and to writing as metaphors for (queer) love. One can hope the poet will allow his craft to take new paths, before the old, familiar ones harden.

Arpita
Arpita teaches English literature at an undergraduate degree college in rural Bengal. She is too emotionally invested in lesbian romances and queer fanfiction (and fandom in general), and can be found reading either of those at inappropriate times and places.

Latest posts by Arpita (see all)