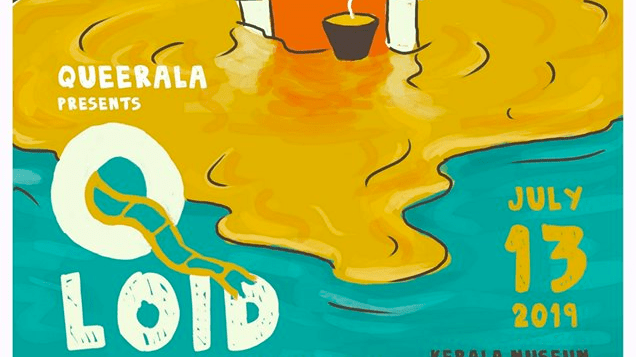 Q-loid : Queer Short Film and Documentary Festival was a first of its kind in Kochi and perhaps even in the state of Kerala. In its first edition, which was a single day event, Q-loid screened 9 short films.

In no particular order, I will talk about 3 films, which stood out in the terms of the ‘non-cliche’ topic/protagonist they chose to talk about.

“Let the past die. Kill it if you have to. That’s the only way to become what you were meant to be.”
~Star Wars : The Last Jedi

In his debut film, Jijo focuses on the life of a young transman Sanjo residing at Kochi. What the filmmaker intentionally and ingeniously does is – he takes us only and only through the present and the future of Sanjo.

Shouldn’t that really be how one should live his life? Why to unnecessarily be indulged into the sympathetic narrations of our past?

In this short documentary we get a glimpse of several aspects of Sanjo’s day to day life. To name a few : his love towards animals, his interest as hockey player, his sincerity towards work as a food-delivery person, and his concern about insensitive treatment from the media and government to trans people.

Gender, just like religion, is a man-made concept. There is nothing really ‘natural’ about it.

Within the queer spaces, there are a few concepts which are still ‘new’ and hence rarely discussed. One of them is – gender fluidity.

Then there are few concepts which are ‘confusing’ and hence broadly misunderstood. One of them is – bisexuality.

In this short film Oruvanukku Oruththi, the film maker does an amazing job of putting light on both of them. The best thing is that there is no preaching or definite conclusion given to the audience. I love such films, where the ball is put in the audiences’ court.

A young man and a young woman, forced by their mothers, meet for an arranged marriage private talk. Very quickly and very truthfully, they begin sharing stories of their past romantic love affairs, opening up their scars perhaps for the first time.

What happens in the end is both : aspirational and thought-provoking,

A very popular question about the queer community by the non-queer community is : Where are the queers? We never see them. They must be extremely less in number and thus insignificant.

“We are Queer. We are Everywhere” is what one feels like yelling at such people.

Please Mind the Gap does that. In a very subtle way.

This short documentary is about a trans-person, who in a very unapologetic and yet appealing way, gives us an insight in to his life.

The best thing about this documentary is, it is entirely shot at public places – inside Delhi metro, at the lanes in Delhi, around malls in Delhi. That’s an intelligent choice by the filmmakers to give the message – We are everywhere.

Another very significant point discussed by the protagonist is  how trans-people have to go through lot of anxiety when they access ‘public’ services – be it public transport or public toilets or public security checking.

The ‘public’ stares that they get, almost everywhere, from all the cis-people (both queer and non-queer) keeps on reminding them that they are ‘different’, affecting their mental health prominently.