Shab is one of National award winning filmmaker Onir’s most ambitious project and he does full justice to it, in terms of production values and more importantly in handling a complex story with multiple plotlines. While in his earlier film ‘I AM’, Onir dealt with 4 different stories, in SHAB he again has four different stories, but they are all intertwined, with the characters’ relationships impinging on each other.

Bringing his rich experience of dealing with nuanced characters, Onir weaves a complex web of emotions that entangle the characters who are on their own journeys of discovery. Be it the wannabe actor turned toyboy Mohan / Afzar Ashish Bisht, or the cafe owner Raina Arpita Chatterjee, the glamorous socialite Raveena Tandon, or the gay cafe owner Neil Areesz Ganddi (Live), or the French teacher Benoit Simon Frenay – all of them have a dark past and an uncertain future.

Whether it is heterosexual relationships or same-sex relationships, Onir imbues them with equal passion and dignity (though I suspect some of the more steamy gay scenes must have been snipped out because of the current censor board’s harsh lens). He neither sensationalizes the relationships nor shies away from stripping them naked.

This is not a gay film, but a film with gay characters who are real and ‘normal’, whom you have seen in Bollywood or within the LGBT community, who are believable and with whom you empathize.

Ashish Bisht, Raveena Tandon, Areesz Ganddi, Simon Frenay essaying very challenging roles deliver with aplomb. But it is Arpita Chatterjee who steals the show with both her effervescence and emotional outbursts.

Onir, Sanjay Suri and entire team needs to be appreciated for making SHAB, and hope independent fearless films like these that challenge stereotypes and hold s a mirror to society, do become a box office success. 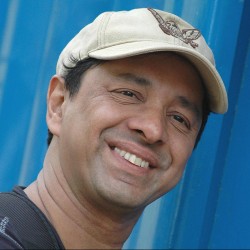