Trans Woman Beaten and Assaulted by Army Personnel in Hyderabad : Statement and List of Demands by Women and Trans Groups

On the night of 8th July 2017 at around 10:30 pm, a 34 year old transgender woman was walking from the Tivoli talkies to Jubilee Bus Station in Hyderabad. 10 uniformed Army Jawans (without name tags) accosted the survivor and began coercing her for sex. When the survivor firmly refused, they attacked her and dragged her inside the cantonment area, in the vicinity. The soldiers assumed her to be a cis-woman, and she screamed that she was trans. Dismissing her entreaties to be released, the soldiers dragged her by her feet inside the gated cantonment area. They bolted the gate so that she could not escape and two soldiers stood against the gate to stop her from escaping. They were all heavily drunk and they groped, pinched and traumatized her by clawing her breasts, chest, nipples and thrashed her on her hips, legs, thighs, calf muscles, right wrist and left elbow with thick branches torn from nearby trees. They also battered her back and coercively shoved a stick toward her posterior, but since she had her clothes on, she was able to stop the forced entry of the stick into her anal orifice. As she struggled to crawl out, she was time and again dragged back by her feet and was battered mercilessly. In the survivors’ own words, the soldiers kept yelling, “Abey isey aaj chhodney kaa nahin, chodnaa hain”. (Hey, this person should not be left today, she should be fucked). The survivor has been grievously hurt and has scars from the assault all over her body. 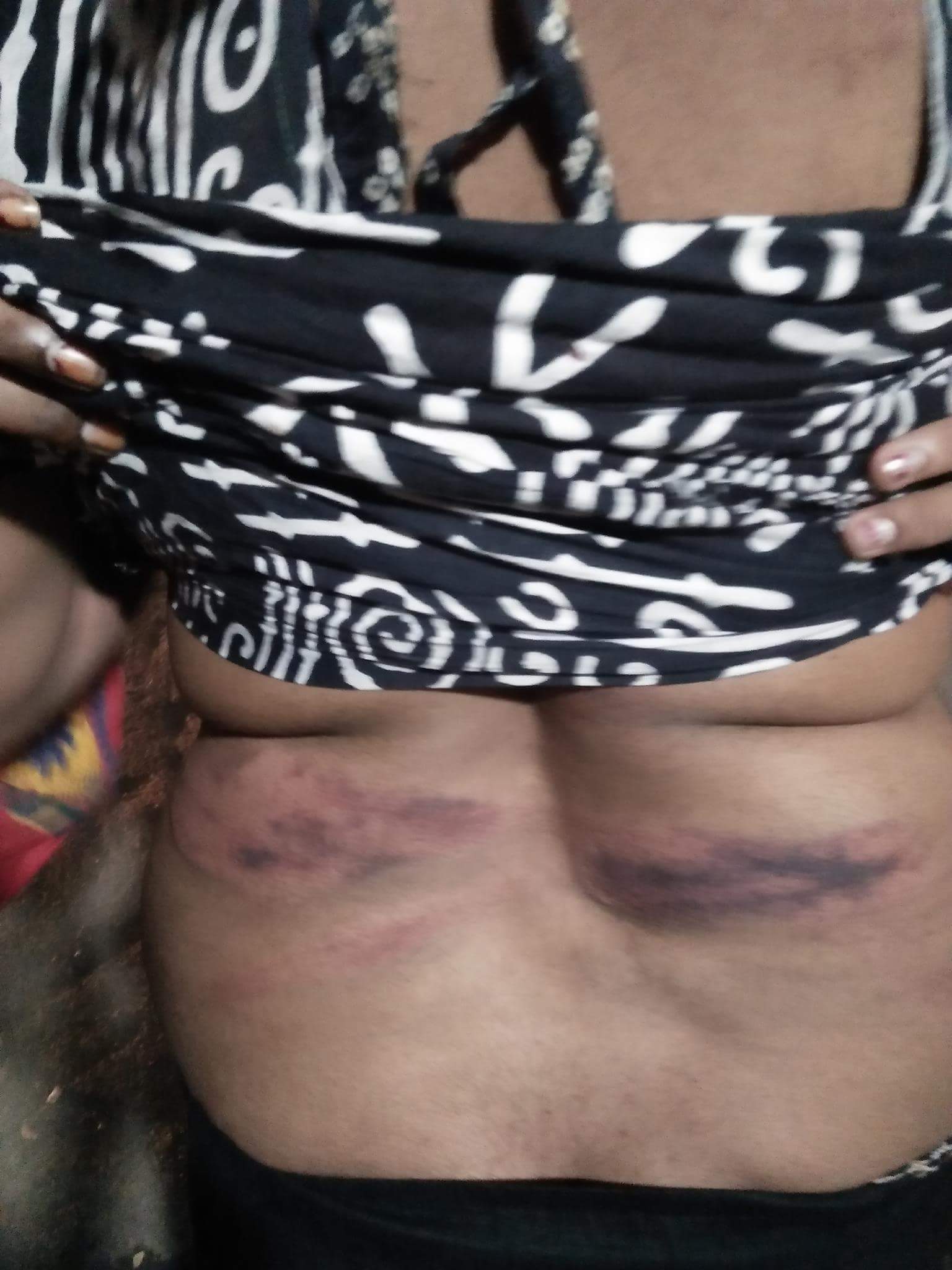 This brutal attack, coupled with bleeding, left the survivor unconscious for almost two hours and it was only after regaining partial consciousness, she struggled and crawled out of the gate with enormous pain. Later, with the help of a few other transgender women, friends she was taken to the Begumpet police station at approximately 1 am on 9th July. The Begumpet police referred her immediately to the Govt. Gandhi Hospital and a Medico-Legal Case was registered at the Gandhi Hospital around 1.45 am on 9th July. 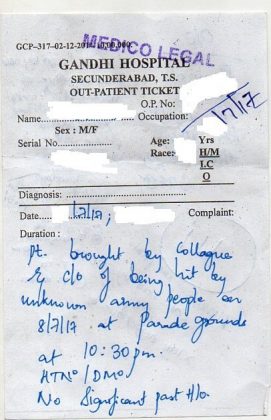 As if this torture was not enough, the survivor also had to undergo further harrowing experience, when she, along with some other transgender activists were humiliated at the police station for demanding registration of an FIR, based on her written complaint. It was only after building up some pressure and multiple calls to senior police officials in the city that the police went to the ‘scene of the crime’. However, this did not lead to immediate registration of an FIR, although the survivor and activists spent numerous hours at the police station yesterday. In fact, they were called ‘trespassers’ and even ‘thieves’ by the SI, Mr. G. Jagan. The police sought to coerce the survivor into changing her complaint, as though she had trespassed into army territory, which she flatly refused. After much persistence from the survivor and other activists, the police issued an FIR u/s 324 (voluntarily causing hurt by dangerous weapons) and 352 (punishment for assault or criminal force) of IPC r/w 34 IPC which don’t take cognizance of the complaint of the survivor of sexual harassment and assault by the soldiers. 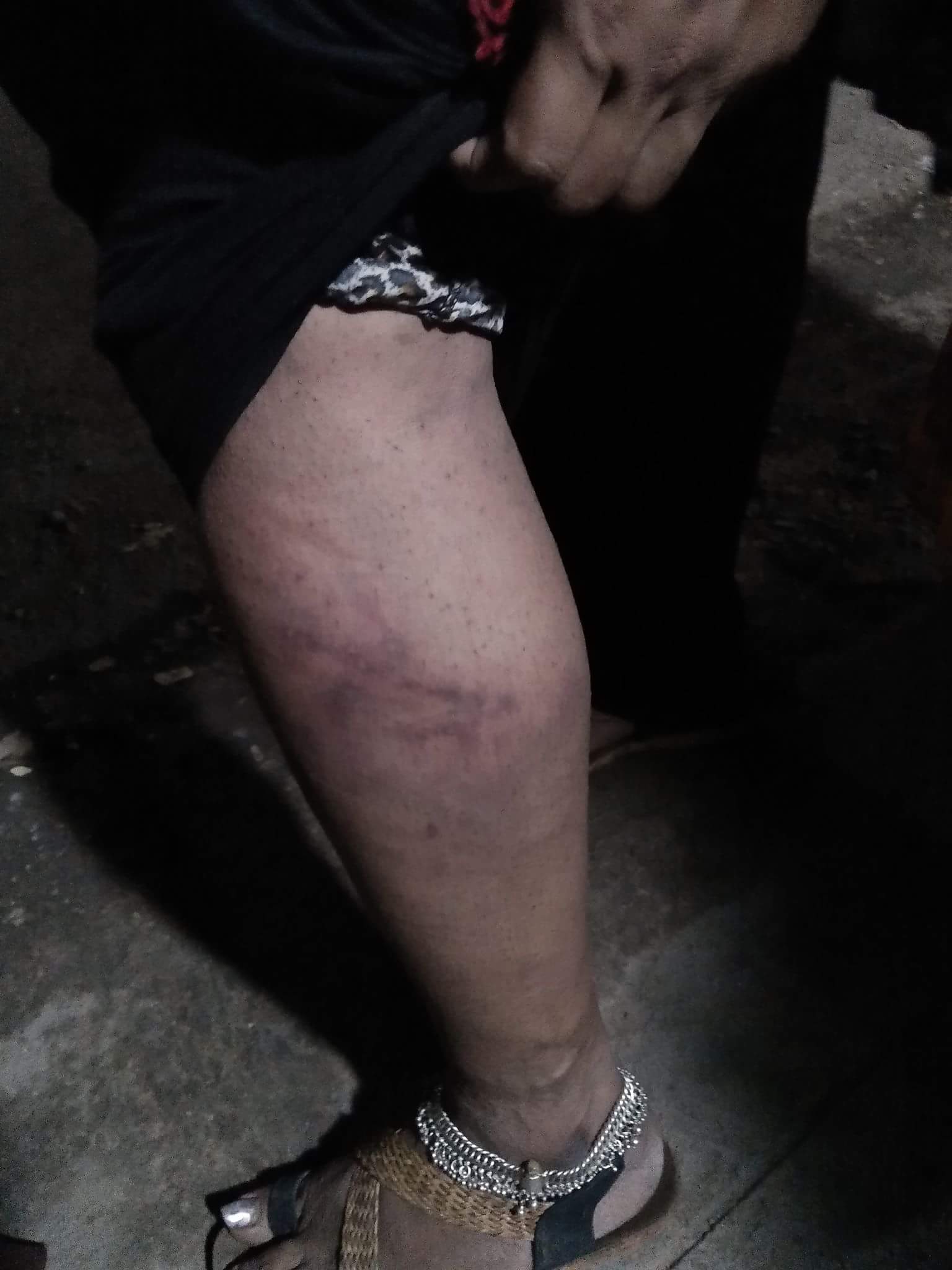 The defence wing of the Government of India’s (GoI’s) Press Information Bureau has issued a statement claiming that multiple transwomen had trespassed onto the Army parade ground and were “requested” by Army personnel to leave. They alleged that the trans women were “aggressive, abusive and tried to assault the Army personnel” and that “no force was used by the Army personnel”. The intense bruising all over the body of the survivor as duly registered in the medico legal complaint beg the question of how she was so thoroughly injured by a request made with “no force”, and the military is repeating old tropes about transwomen with no evidence whatsoever in order to reinforce the transphobia that underlay the assault by their personnel in the first place.

It must also be noted that this is not the first instance of military men from this cantonment area assaulting transwomen after dragging them into the compound. In 2015, a trans woman was similarly assaulted with branches torn from trees and among other wounds she had a hole torn into her cheek, such that her cheek was hanging open. Then too, the police filed a benaami FIR that didn’t identify the assailants nor did it adequately investigate the identity of the perpetrator from the army. This constitutes a dangerous pattern of impunity.

While there is high talk of the NALSA Judgement and proposed legislations for the trans community, little seems to change on the ground and transgender people continue to face various forms of discrimination, violence and denial of access to opportunities, resources and livelihood.

Women Against Sexual Violence and State Repression (WSS) and Telangana Hijra Intersex Transgender Samiti (THITS) express outrage at the brutal physical and sexual assault of a 34 year old transgender woman by a group of army personnel. WSS demands stringent penal action against all the accused, a speedy investigation and trial, as well as complete medical treatment, compensation and legal support to the survivor (name concealed to respect identity). WSS notes that instances of violence against transgender persons such as this are not sporadic, but part of a systemic oppression, which is directly linked to structural oppression by the State.

WSS and THITS condemn this brutal incident in no certain terms and demand the following immediately:

1. Registration of the survivor’s FULL complaint as an FIR incorporating stringent sections against her physical and sexual assault; fair, speedy and unbiased investigation by the police and conviction of all the accused, as per law. Invocation of relevant sections of sexual harassment and assault that have been avoided in the current FIR by the police.

From the defence forces:

1. Investigation, suspension and strong disciplinary action against all the accused army personnel as well as their area commandant by the Ministry of Defence, Govt. of India.

2. Sensitization of the army, police and the other state personnel and agencies on the issues, rights, laws and judicial orders with regard to transgender people.

From the state government:

1. Complete medical treatment and legal support to the survivor at state expense and appropriate Compensation to the survivor for the enormous physical, psychological and psycho-social pain and trauma from which she must recover.

2. A categorical written assurance by the DGP and Home Minister of Telangana that the State would take all measures to pre-empt such incidents henceforth and immediate action would be taken in case any violation of the rights of transgender persons comes to the notice of the police, at any level and in any area, throughout the State.

3. Immediate consultations with the transgender community by the State of Telangana for the long overdue implementation of the Judgement of the Hon’ble Supreme court in NALSA vs. UoI (April, 2014).

From the central government:

1. Explicitly include transgender people within the ambit of the victim/survivor in all laws on sexual assault.