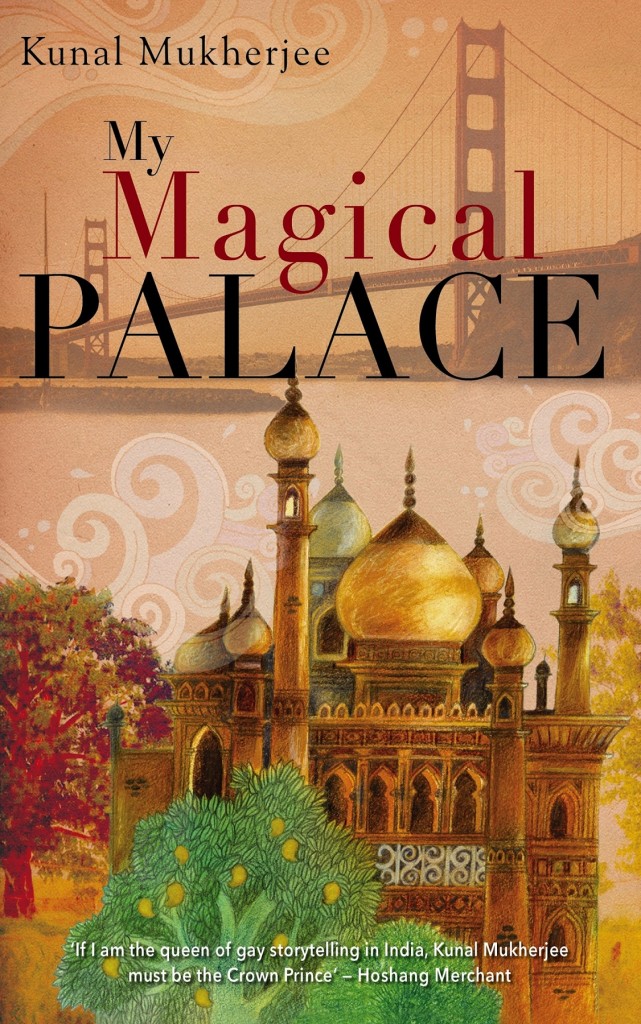 The magical part about My Magical Palace is Kunal’s ease for storytelling and his ability to create a bygone era- the 1970’s Hyderabad in all its beauty and offensiveness. A bildungsroman novel, My Magical Palace is a fast paced narrative about love and longing, loss and betrayal.

One morning a scuffle breaks out between Rahul and his live-in partner Andrew in San Francisco regarding a visit by a relative so Rahul can meet a suitable girl. Andrew immediately leaves the apartment.

What happens from there is a series of emotional yet hostile conversations between them over the question of Rahul’s “coming out”. They love each other intensely, yet Andrew makes it very clear that he will never come back till Rahul comes into terms with himself and his family about his orientation and identity. Rahul decides to tell his story, the truth that Andrew doesn’t know. The story takes the readers back to 1970’s Hyderabad.

Rahul’s “coming out” is already anticipated in the beginning though it actually happens at the end. The entire novel dwells on his life-long silence on his sexual orientation and identity. His partner Andrew is inclined towards judging Rahul badly for his silence in the beginning. However, he earns enough sympathy from Andrew in the course of the novel as his past gets charted out in detail. Revolving around the palace Rahul grew up in Hyderabad, the events of the past gradually build up an exquisitely charming picture of a bygone era. This era, gone forever, is beautiful and nostalgic but the author also digs up the taboos, hypocrisy, double standards, patriarchy, communal hatred, and, conservatism that plagues the society at that time.

The novel is interwoven with differentplot threads that involve characters with one thing in common which is that they that defy conservative values and traditions. Mallika’s tabooed relationship with the demure Muslim boy Salim leads to the failed marriage with the Bengali “babu” Sanjib, an alliance made to comply with their parents’ decree. But Mallika’s life is redeemed at the end by a reunion with Salim in a city far away from the clutches of her people. Several events shatter Rahul’s perfect world. His loss of his treacherous best friend Ranjan is further complicated by the tumultuous but short-lived affair with the suave but pretentious Shubho “dada”. However, Rahul is fortunate to find a mentor and friend in Colonel Uncle who is also an unmarried bachelor and possibly gay.

As the story progresses, what appears in the beginning to be just another “gay” novel turns out to be much more. It is a novel about the bonds and pitfalls of friendship, family, love-relationships and most importantly it is about finding oneself amongst all these turbulent challenges and affairs. HarmonyIndia.org aptly writes thatthe “book goes beyond being ‘gay’ literature; rather it is a study of the eternal dilemmas that defy the boundaries.”

Apart from the heart-breaking tales, the half amusing half serious take on Bollywood and Rajesh Khanna creatively told from the perspective of the child Rahul provides depthness to the character and humour to the readers. Such a line like, “My fascination with Rajesh Khanna would most certainly be my downfall. I had written a love letter to him, if the school found out, I could be expelled. How foolish I had been!….The boys would call me a ‘bloody homo’!” gives a strong insight to Rahul’s psyche but also creates a humorous tone to the readers.

The novel presents a mildly scathing picture of homosexuality, the condition of women. especially educated Bengali women, and the family and social fabrics of that era among the Bengali community of Hyderabad. The Bengali ethos about culture that runs throughout the novel is put up for critical considerations. By the end of the novel it even becomes a point of ridicule. When Rahul calmly explains that he is gay and he is sorry about meeting the girl for an arranged marriage business, Mr Ganguly breaks out, “Chee, Chee! How can you behave like this? You belong to a respectable family. We are not just Indians, we are Bengalis! We have a duty to maintain our parents’ god name in society. So this is what you have in America! To be perverted….” Mr Ganguly’s proud cultural ethos is left to be judged by the readers. This bildungsroman is definitely a strong critique of a society with all its offensiveness and hypocrisy.