Indian Gothic Drag For Voices against Patriarchy: A Photo Performance

With the new normal due to Covid19, performance places remain closed and artists across the globe are trying out new ways to create and share art. Being a drag artist myself, the pandemic has forced me to explore new possibilities to showcase my art, leading me to collaborate on a photo series called “VisssKanya ” and yes, it’s a mockery of the witch hunting statements thrown at women for ages now.

Manab Das, an ace photographer and a dear friend, reached out to me to do something like a photo performance with my drag art. Around the same time I had started exploring the concept of Goth and gothic subculture. Yes, “Goth” has been hitting the headlines for all the wrong reasons in connection with SSR’s passing away and him staying in a gothic hotel in “Palazzo Magnani Feroni” Italy. Goth culture has always been a taboo and misunderstood in India and this wave of theories made it even worse . Adding to that, the witch-hunt and shaming of women who are progressive and self-centered as witches is terrible. References used in movies like “BULBUL” ,”Pari”and “Ek thi dayan” have made the idea of goth look more like a magical culture than being just a lifestyle in India. Since these were my thoughts, I thought to do some work on this.

I, along with a friend of mine – Sajiv Palasa, came up with a concept of photo performance to represent Indian Goth and in that we wanted to see how drag fits in. In the west, drag Queens in Goth style aren’t too difficult to imagine. It’s mainly a man doing goth, but with more femininity and exaggeration. Goth Queens mainly use the very old or new style of goth looks. The colors are mostly neutrals, consisting of blacks and whites, maybe even gray. Most Goth Queens usually do a white face with black eyeliner, eyeshadow, black everything. Their clothes are obviously in the blacks too, but it may vary depending on the look they choose. However, for me, I wanted to define the Indian approach of the Goth Drag.

Manab, Sajiv and I agreed to do a project in my house to capture the photo performance. My references were the folk tales of Dayan, Witches and Chudails, because women are often labelled these . I then chose the colors of Red and Black as the theme and moved the White out of the pallet. Sajiv was the other performer who chimed in to be the masculine figure of goth, while I being in drag was the feminine one. Manab’s vision was to make the photographs talk for themselves, showing both the sense on inter-dependencies of the illusioned gender and the spooky aesthetics of goth.

The format was simple, we both will be posing nonstop, interacting with our bodies while Manab clicks us. We used the available objects and the entire series needed to be shot in one go. Usually in a photoshoot there are breaks and discussions, but here we ensured to get the complete story without a break to maintain the essence of a Photo Performance.

The performance was a feminine goth “Vissskanya” with revealing mustache and body hair seducing and embracing the lover, as they go through the idea on how to keep alive their love when she choked the masculinity to death (showing win of feminist over patriarchy). It was quite an experience to see two bodies coming together and performing while exploring the male masculinity and being transvestite simultaneously. The shoot took around 2 hours.

This was a project which made me realize that the medium of drag art is not only restricted to stage but can transcend beyond to multiple avenues and how drag is interdisciplinary art of different forms. This series was a slap to the witch shaming of women, and made the statement “Even Men are Witches, I am just one”. It also brings the idea of Indian Goth and helps us embrace the tiny little community of Goth culture with PRIDE. 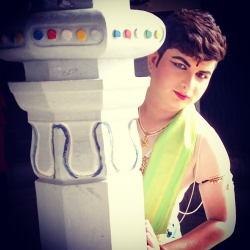