Addressing sexual and reproductive health rights has become challenging with the time. As much as we move ahead in the work, we realize it’s not a field, rather a huge domain of life. Talking with people about considering their sexual health rights, issues and needs as a normal phenomenon makes your lips stammer because you are about to talk on such a sensitive theme, which is desired and experienced by everyone but majority, or I would say in our context mostly, are shy enough to speak about it.

From beginning of a talk till the initial half an hour, legs start to shiver and the gut sounds become audible, like a drum tapped continuously that creates a roar. One starts apprehending about what is actually not going to happen.

Is the person sitting in the last row, about to stand and slap?? Or is the guy at the right is staring with anger or the crowd is going to shout and ask to leave because they are no more comfortable to talk about this? All of these statements jump out of your body in physical signs. One can start feeling like becoming unconscious in few seconds but fortunately the whole address is completed with confidence, knowledge and power of creating transformation.

And trust me no one faints …

Yes!!! This is better understood by all those who have addressed any sexual health domain in any crowd, either of students, children, families, etc. and the above description fits what all of us have experienced. My story is similar too. I babbled, stuck, rephrased but didn’t leave any pertinent information which was essential because I felt what was happening to me was something normal, as I gathered the courage to discuss, explain, explore and address “puberty of young males in a sub-urban community of Karachi”. The environment was full of secret talks, little giggles, lot of whispers and reddened fore heads and cheeks. I was one by one looking at every pubescent or pre-pubescent boy sitting in the room, as they were desperately waiting to listen to what I had planned for them. 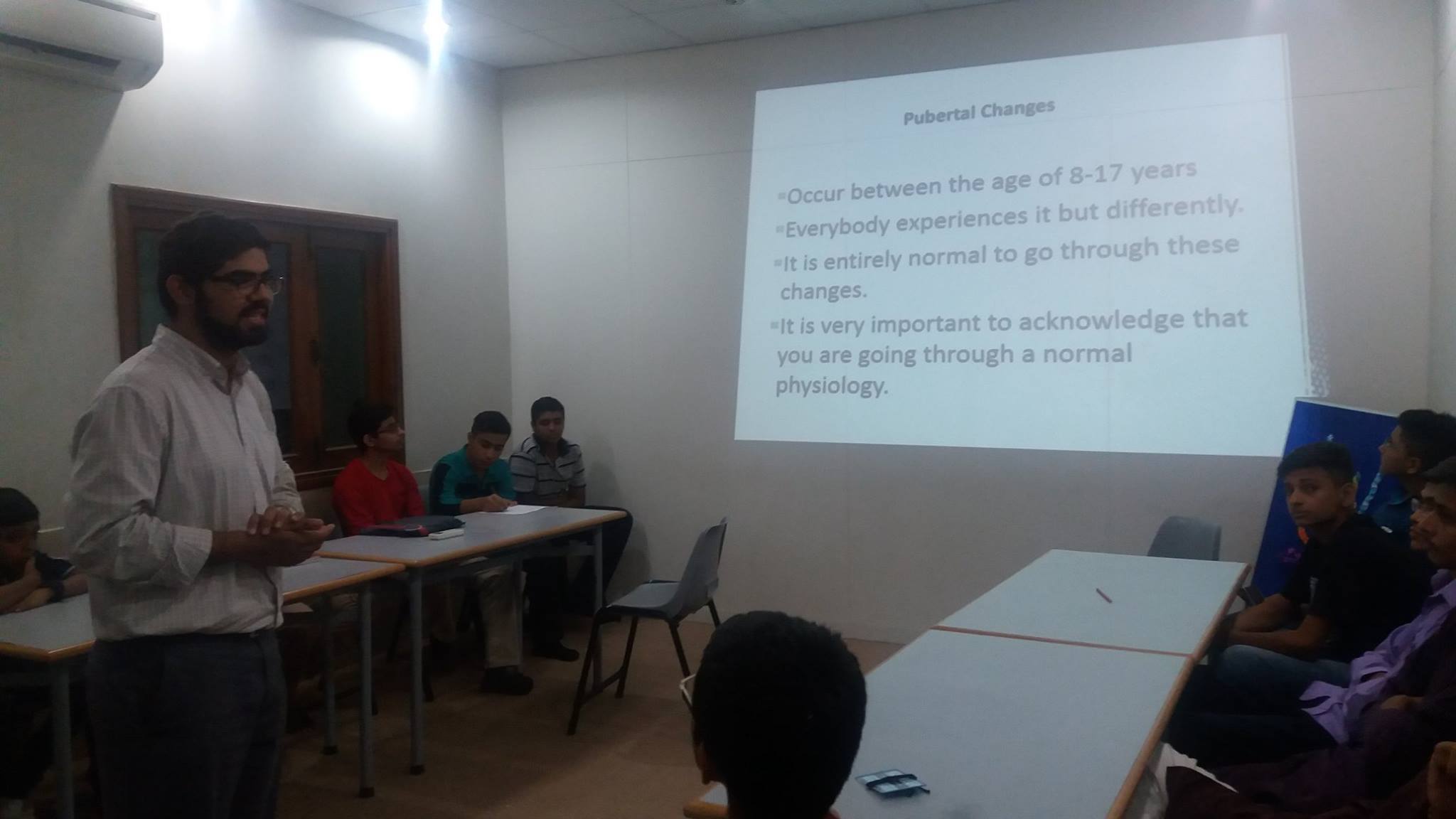 The facilitator shares about pubertal changes, while the group of young boys listens attentively to the talk. (Picture courtesy: Nausheen Salim)

Before I started speaking on what a full package of interesting, new and clarifying knowledge I had brought for them, I decided to create a relaxed atmosphere by introducing myself and giving them a chance to tell about themselves, so that we could share an equal opportunity to talk and discuss later as well. What I discussed earlier was about “being comfortable”, and my next step was addressing that comfort with the skills I had learnt, before throwing any questions, starting a discussion or sharing any information. I have realized with my work that this comfortable environment develops during the session as the talk or discussion proceeds, and I was very much receptive and optimistic for that. That is why I welcomed to address confusions from the beginning because they would hinder them in moving forward to understand all these concepts. Not because they have to appear in an exam but they have to carry out their whole life on the basis of this experience of puberty and that can “make life or break life”.

I displayed few images on the slides – a baby jogger with lightning, a dress of new born and few soft toys. And after exploring what all these thing were, I moved to an ice-breaker question – “Why don’t we wear or use these stuffs now?” As expected, most of them responded: “Kyu ki hum baray hogye hain” (translation: Because we are grown up) and that was a catch for me to initiate the discussion with another question: “How would they know they have grown up?” I was surprised at the beginning (and happy later) as everyone described accurately majority of the characteristics of a pubescent male while going through a precious life time experience of the puberty. And through this cruck the discussion moved on and the content was covered without even touching the slides of a laptop, as each of them started engaging in the form of their responses or by taking the discussion further by asking questions and clarifying the queries.

This led us to touch upon a very great part of sexual health specific to puberty, which has always been essential to address and clarify – myths and misconceptions regarding puberty, which included discussion on masturbation, appearance of a male, impact of size and shape of genitals, attraction to opposite or same gender and many more. The major milestone of the talk in terms of specifically addressing the myths during the discussion was clarifying the myth that “gender of the baby is carried in terms of mothers’ genetics or characteristics”. This was very receptively taken by the young boys and interestingly they were actively involved in sharing scenarios to counter clarify the myth in a better way and take home a message with them that there is no particular reality in these kind of statements regarding sexuality, reproduction and puberty as they have no specific and clear cut scientific logic behind them. 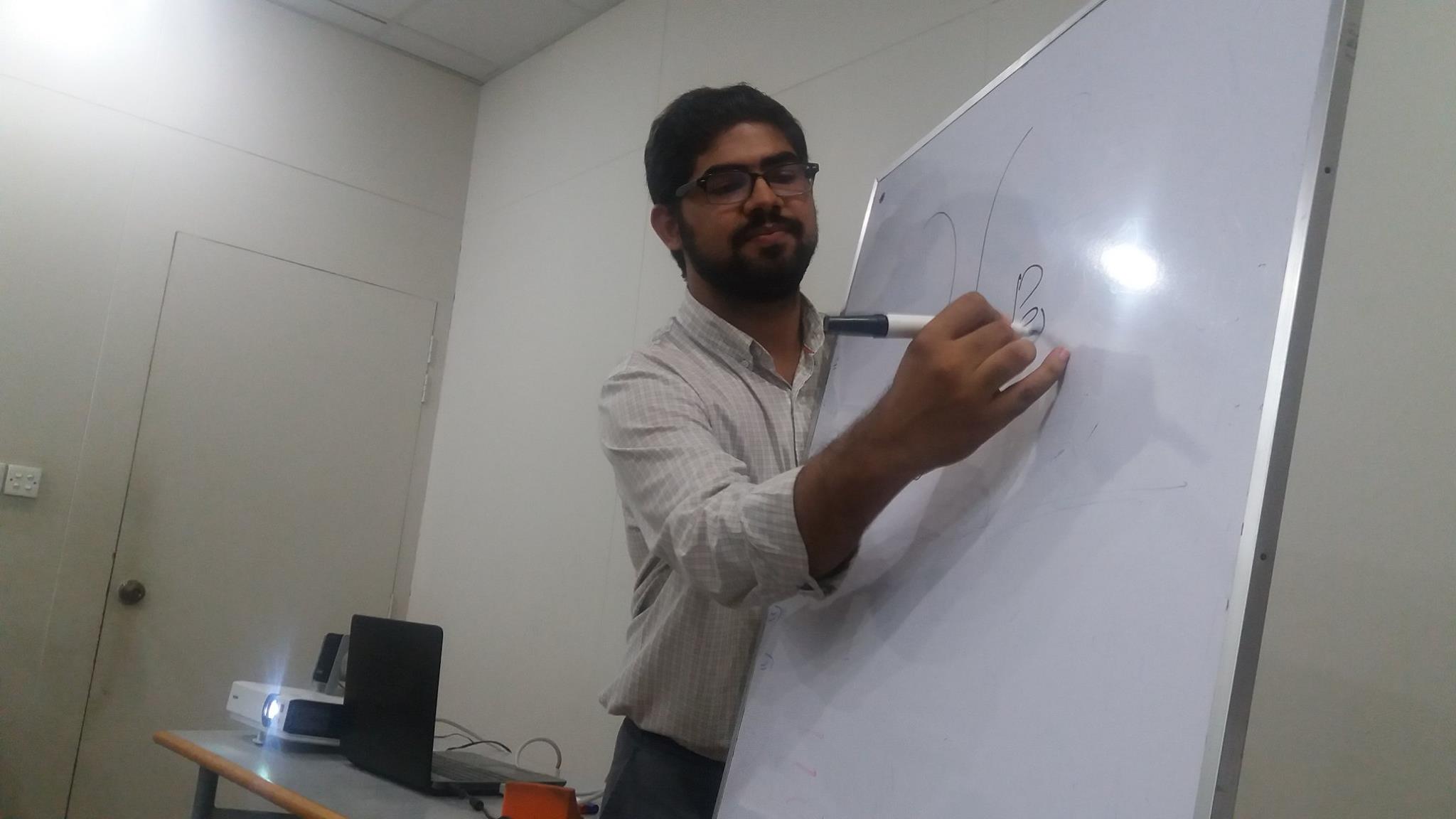 Use of illustrative technique by the facilitator during the discussion. (Picture courtesy: Nausheen Salim)

Various key things marked the great success of the session. All of them were used to benefit the audience in an interactive manner. Among those, one of the techniques of creating illustrations and explaining along with it was a major success. The technique was learnt from a mentor during my own rigorous training and along with creating comfort, breaking the ice, generating healthy discussion and clarifying the myths, the illustrative technique buddied and fitted well. The technique was utilized to elaborate the physical structure of men’s sexual/ private body part along with describing the natural physiological mechanism and functions of these, so they must be aware of what changes are to be expected and when to report abnormality. These matter a lot with regard to health and cultural context as well.

A video that was edited and dubbed into Urdu to describe pubertal experiences was also played as part of the session. The barrier to the discussion was time limit and specific context that was planned to be delivered as the encounter with the particular group was an initial meet up. I would specifically acknowledge all my mentors for the huge support over many days to prepare me for planning another opportunity to address sexual and reproductive health matters of adolescents.

Sarmad Soomar
Sarmad Muhammad Soomar is a nurse by profession and sexual health, child health and mental health advocate by interest. Creativity and innovation in any domain of life are his passion.