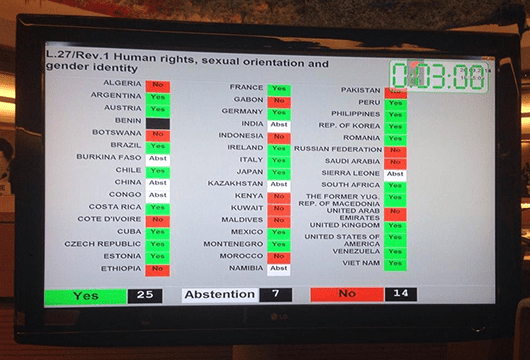 India abstained from voting on a resolution at UN condemning discrimination based on sexual orientation and gender identity. The resolution was passed by 25 votes in favour, with 14 against it and 7 absentions. In June this year, India had voted in favour of a resolution that excluded LGBT families.

The Human Rights Council resolution—led by Brazil, Chile, Colombia, and Uruguay, simply asks the UN Office of the High Commissioner of Human Rights to gather and publish information on how best to overcome discrimination and violence. The resolution is a watered down version of the original resolution, which asked for such report to be presented every two years.

The opponent’s of the resolution were primarily a coalition of Islamic Nations, called the Organization for Islamic Cooperation and led by Egypt, that attacked the resolution by calling it as imposing cultural imperialism and an attack on Islam. They had presented a total of 7 amendments to eliminate all reference to sexual orientation and gender identity from the text, and make it applicable only to countries who proactively declare support for sexual diversity and rights. The countries expressed displeasure on the passage of the resolution.

Buzzfeed reported a Saudi Arabia representative as saying, “In my opinion, this [resolution] is a human rights violation.” While a Pakistani representative called it destructive for the youth and Muslims. “The wider connotation of the words ‘sexual orientation’ can be destructive and inimical to our Muslim [faith] …and to our youth as a whole,” he said. Kazakhstan, a member of the Organization for Islamic Cooperation abstained from the voting.

“The Human Rights Council has taken a fundamental step forward by reaffirming one of the United Nations’ key principles—that everyone is equal in dignity and rights,” said Jessica Stern, executive director of IGLHRC. “This resolution puts the UN on a trajectory to address the discrimination and violence LGBT persons suffer daily across the world.”