Salaphaty Rao is a third generation Malaysian Indian with roots from Vizag, Andhra Pradhesh, and is settled in Melbourne, Australia currently. All of 22 years old, he got engaged to his boyfriend John Mc Cane from Ohio, USA in a traditional South Indian Engagement held according to Vedic Rituals in presence of family and friends in a ceremony in Melbourne. The two had been in a long distance relationship spanning different continents, and criss-crossing India, for close to three years. 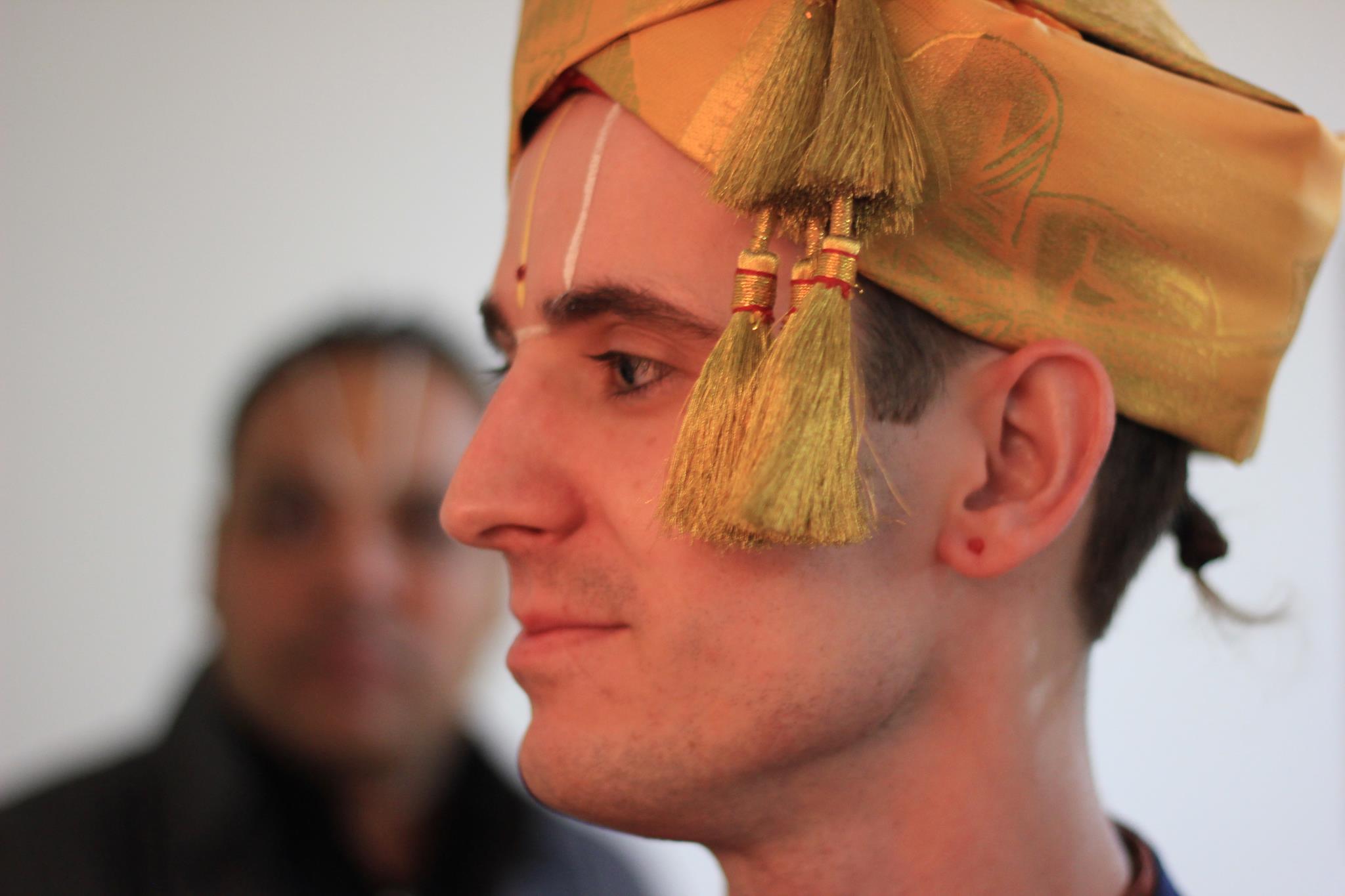 Both John and Salaphaty are religious and so it is no surprise that the two met in a support group for LGBT Hindus called LGBT Hindu Satsang. While the two had been friends for almost a month, they hadn’t spoken to each other until a post shared by John caught the eye of Salaphaty and generated an interest in him. Salaphaty dropped him a message saying Hare Krishna, to which John replied that he was interested in Vaishnavism. “That excited me a lot as I am practicing Sri Vaishnavaite. We talked for hours and I also missed my photography class on that day. It was just amazing,” recalls Salaphaty. 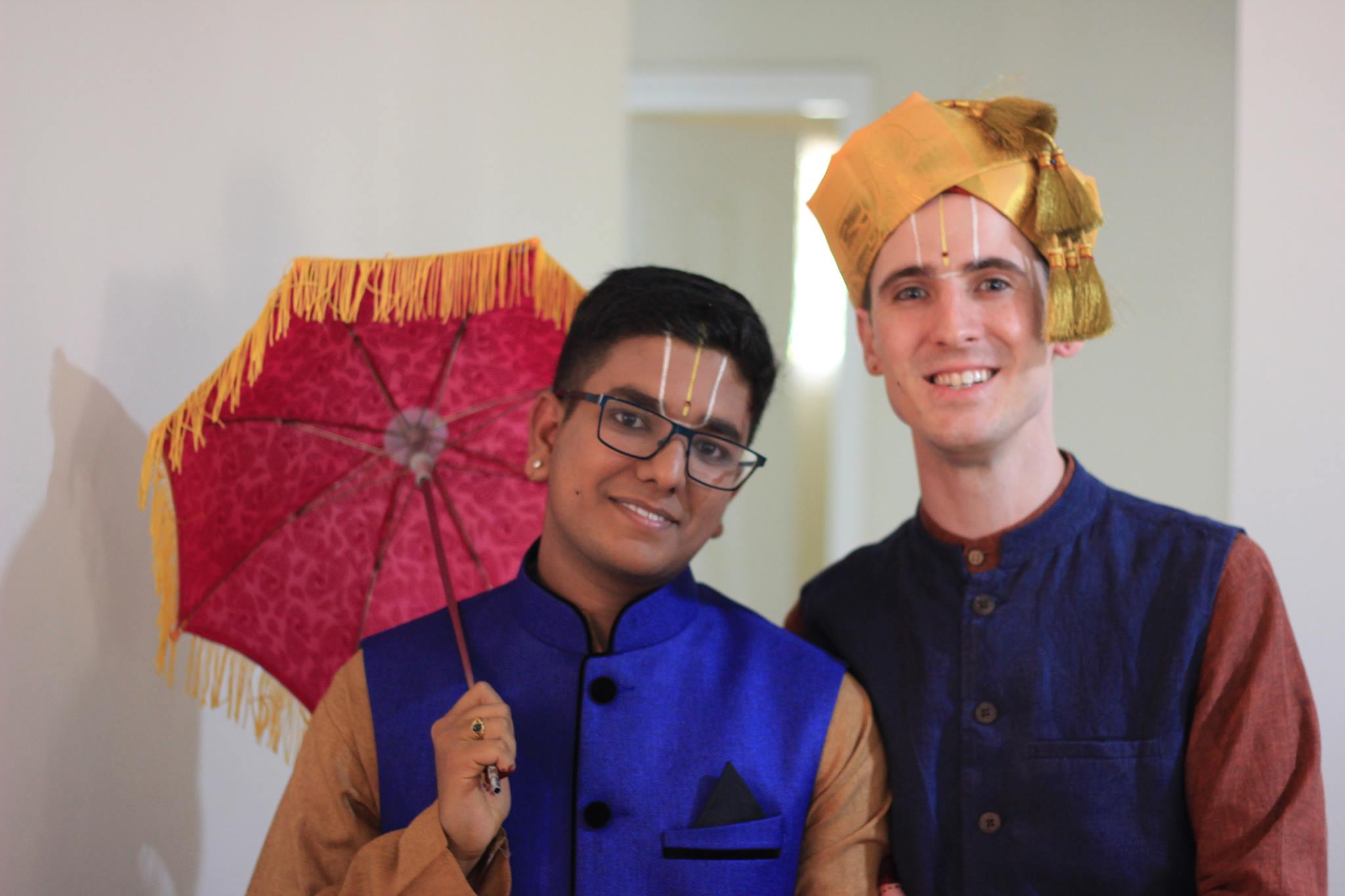 That message was then followed by Skype sessions every day and discussions on ritual significance, philosophy etc. The two then decided to meet each other in India in December 2013 and embark on a spiritual journey across the nation, a journey that was to bring them closer. “I was very unsure until I met him face to face. I still remember the way he smiled at me the first time I saw him. I will also always remember the way my heart skipped a beat at seeing him,” John recollects fondly. The two travelled across the length and breadth of India, continuing their spiritual journey to Bangalore, Chennai, Kolkata as well as getting stranded in Jhansi. “I had travelled through India so many times but I always had stayed with friends or usually had friends in any respective city. Jhansi was a place I knew no one. This turned out to be a blessing because we were able to really spend time just concentrated on each other,” tells John. In Kolkata again, Salaphaty fell sick, and all that John could do was hold his hands as he shivered with a high fever. But these circumstances only brought the two closer. “By the time we left India I knew I wanted to spend my life with him,” says John.

After a year, having saved enough money to travel and meet John, Salaphaty flew to USA in December 2014 where he met John’s family and friends. “When I came back, I was very much convinced that we were meant for each other and started planning to propose to him,” Salaphaty says. Along with his mother, he shopped for a ring and in June 2015 went back to USA where he proposed John at the end of 5 day long spiritual retreat in front of his family and friends. “I was hosting a bramhotsavam (a retreat of sorts and festival) at my home temple,” tells John, “On that day, in a barn we had converted to have our festival, in front of my sister, her husband and our other friends he officially asked me to marry him. I couldn’t stop crying.” 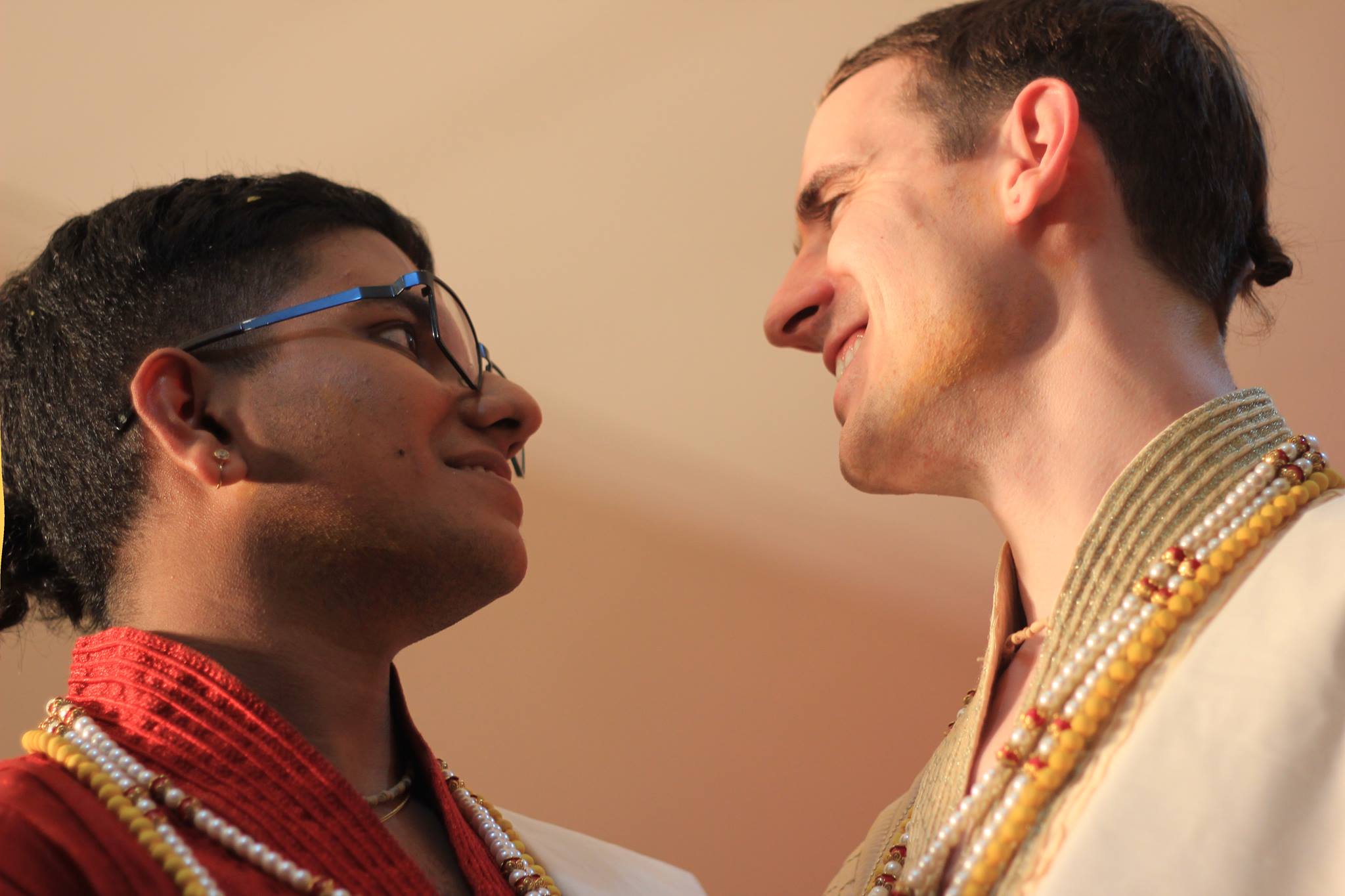 Salaphaty came back to Melbourne and started coming out to his extended family, who were quite accepting. “I felt the need to have a proper Vedic engagement ceremony for my side of family members, especially for my parents to witness,” he says. And so in January 2016, during John’s visit to Melbourne, the two got engaged in Vedic traditions. For John, this was a dream come true. “I had always dreamed of a big stereotypical Telugu function, with women dressed in saris crushing turmeric, more sweet dishes than I could count, dancers and vocalists, all surrounded by family and friends in the warm glow of the oil lamps of the temple.”

Via Gaylaxy, John wanted to give a message to his other half: “I love you, I love you more than the sun and stars. If I go without speaking to you for even a single day I feel I cannot breathe. We have been through so much and we still have so much to go through. No matter what happens, I plan to never leave your side. I want you to never be afraid because I will always be there to protect you, to hold you when you are ill, to support you when you need a shoulder. Our lives will be as one… someday soon,”

The two plan on getting married by the end of next year, and living together in USA. Salaphaty shares his future plans with Gaylaxy, “John and I, have been working on constructing a temple and ashram for LGBT Hindus & Interfaith to promote Vedic culture and sustainable living. After we are married, we are going to work on this project together in effort of inspiring and bringing spiritually minded LGBT people & allies together.” 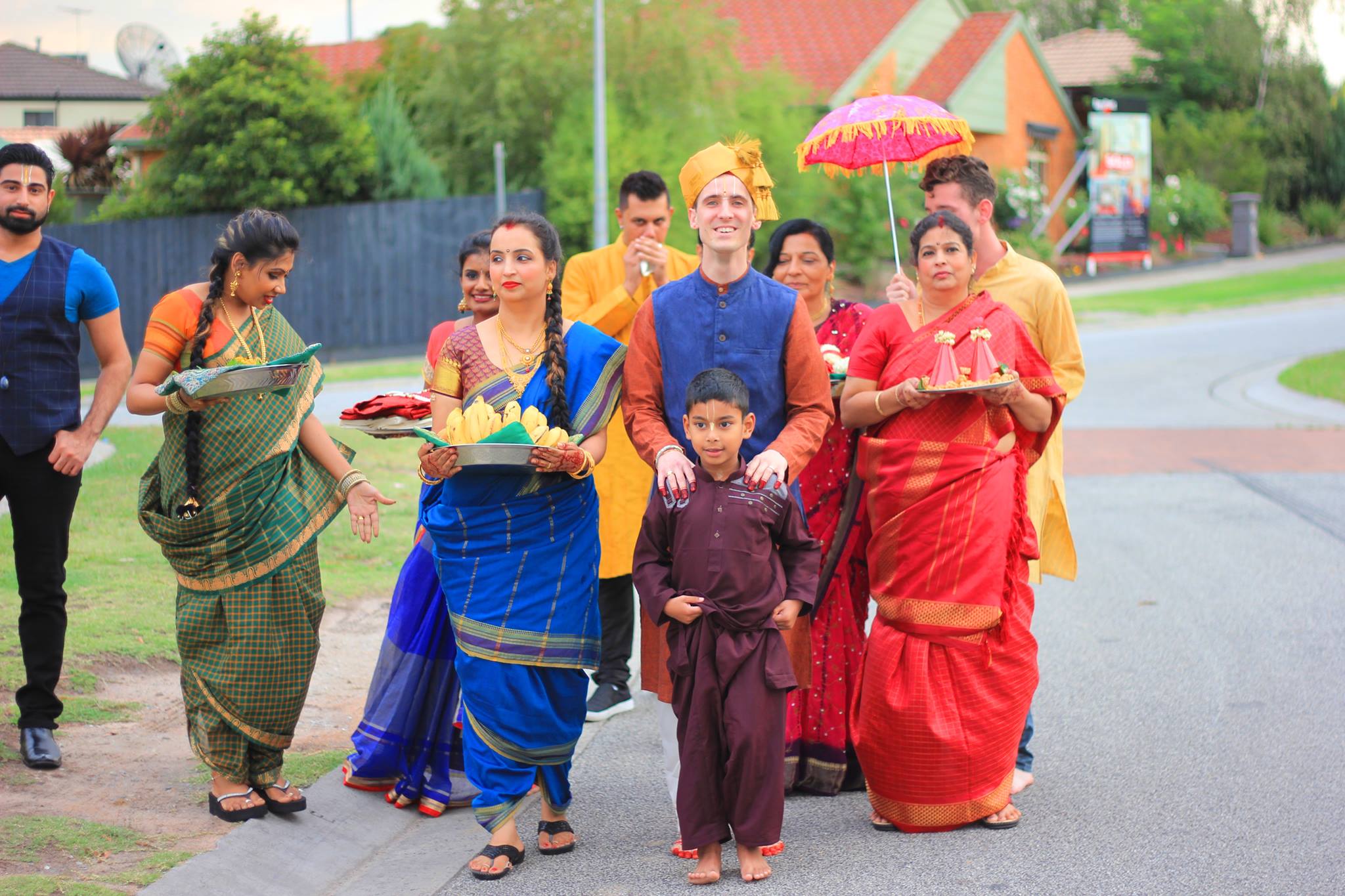 The engagement ceremony started with a short procession of John McCane coming to Salaphaty Rao’s home with his party carrying sweets, bettle leaf, fruits, coconut, garlands which are collectively known as ‘seer’ or gifts. 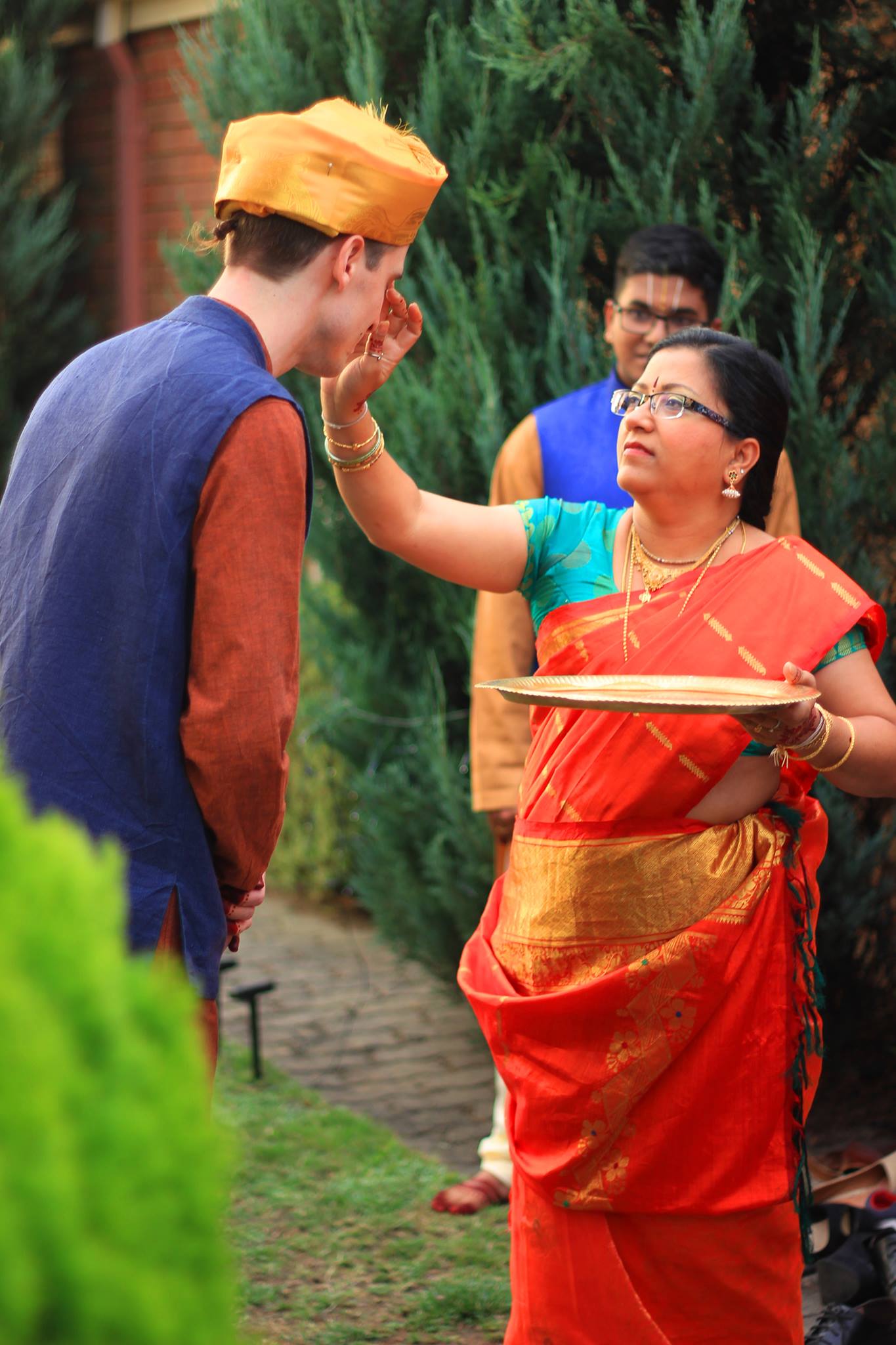 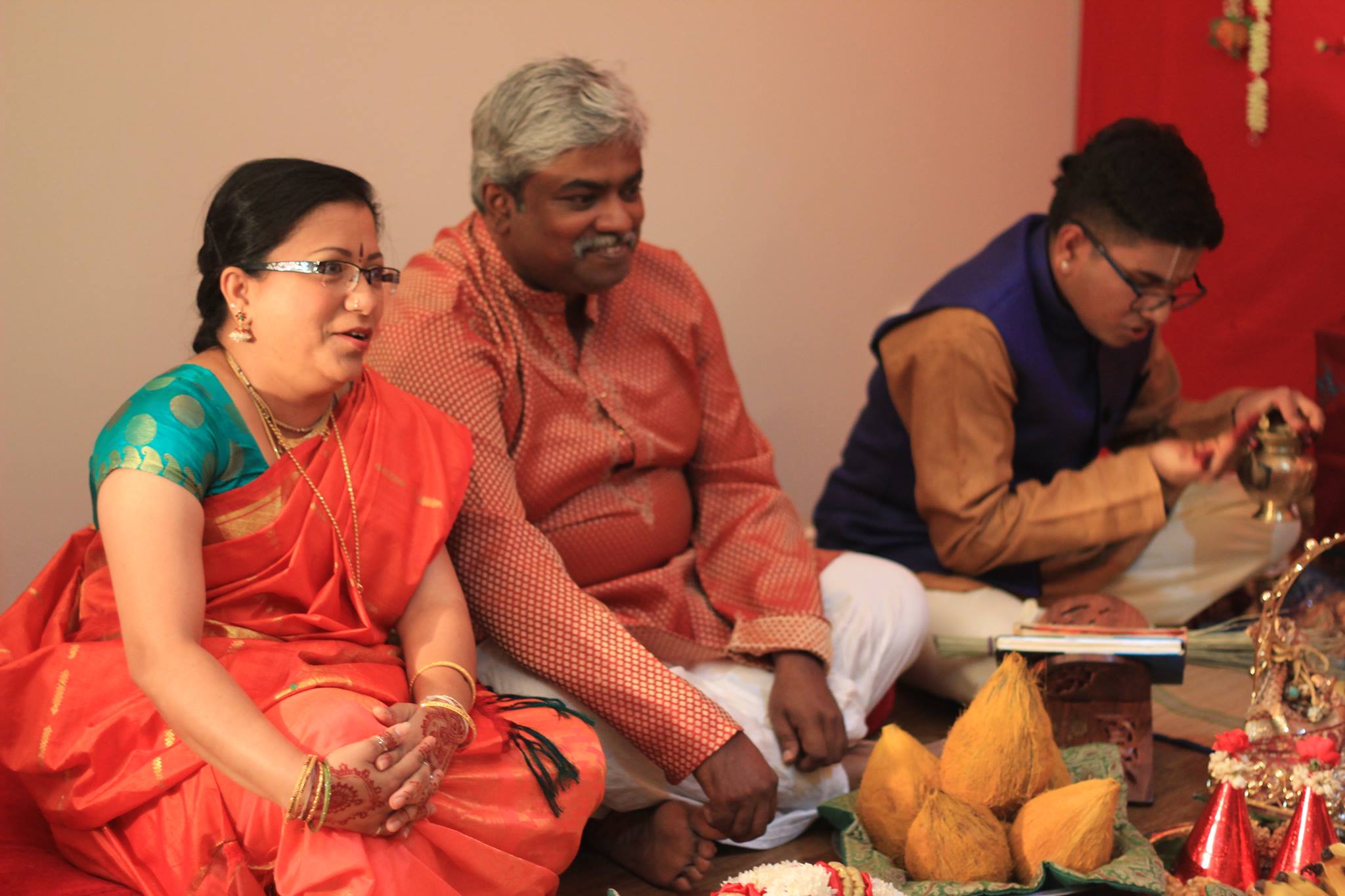 Parents of Salaphaty sit for the engagement ceremony of their son 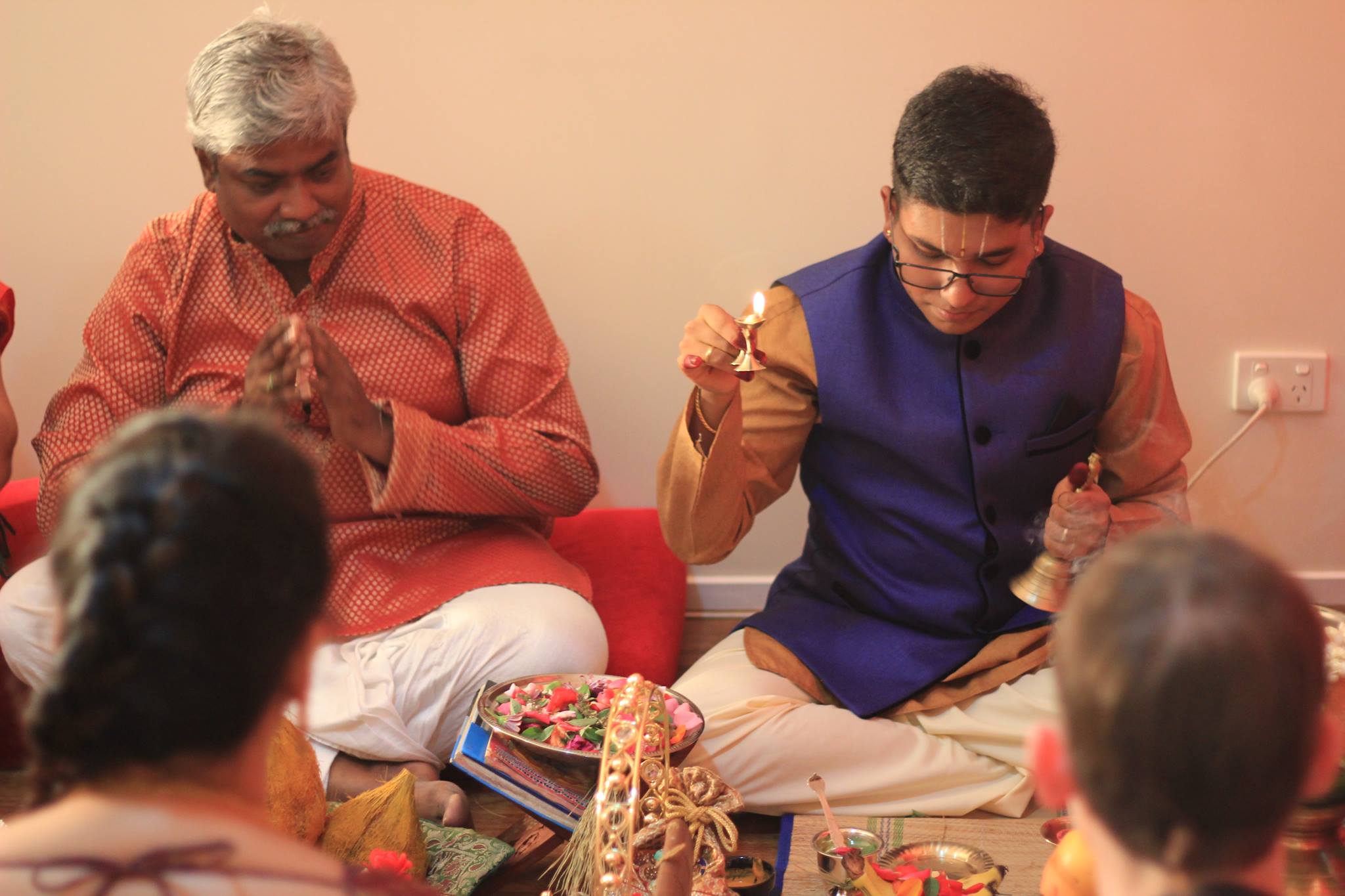 Since no priest agreed to perform the ceremony, Salaphaty (who is a trained priest) himself officiated the Niscayatharta Ceremony with Vishvakshena Aradhana and Varuna Puja 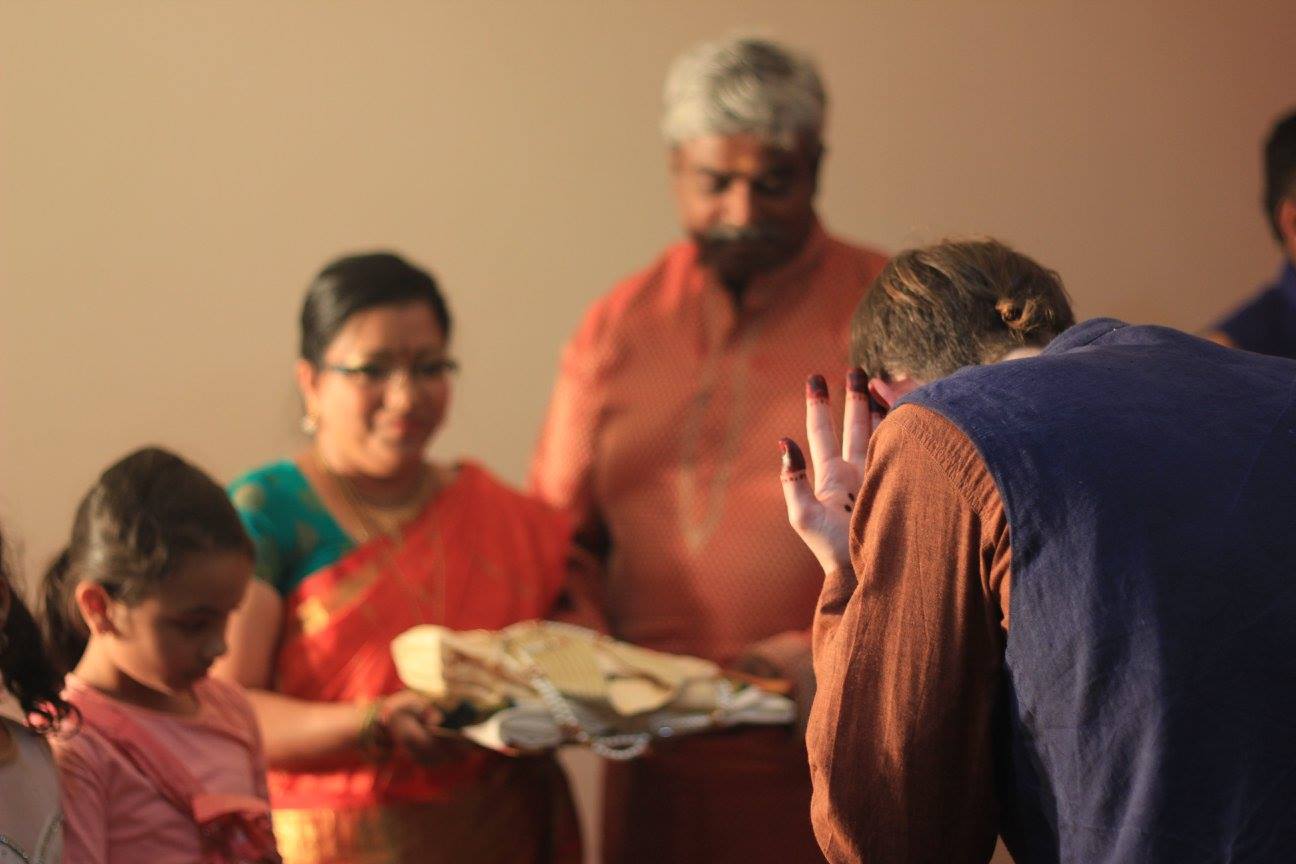 New clothes being given to John to change into 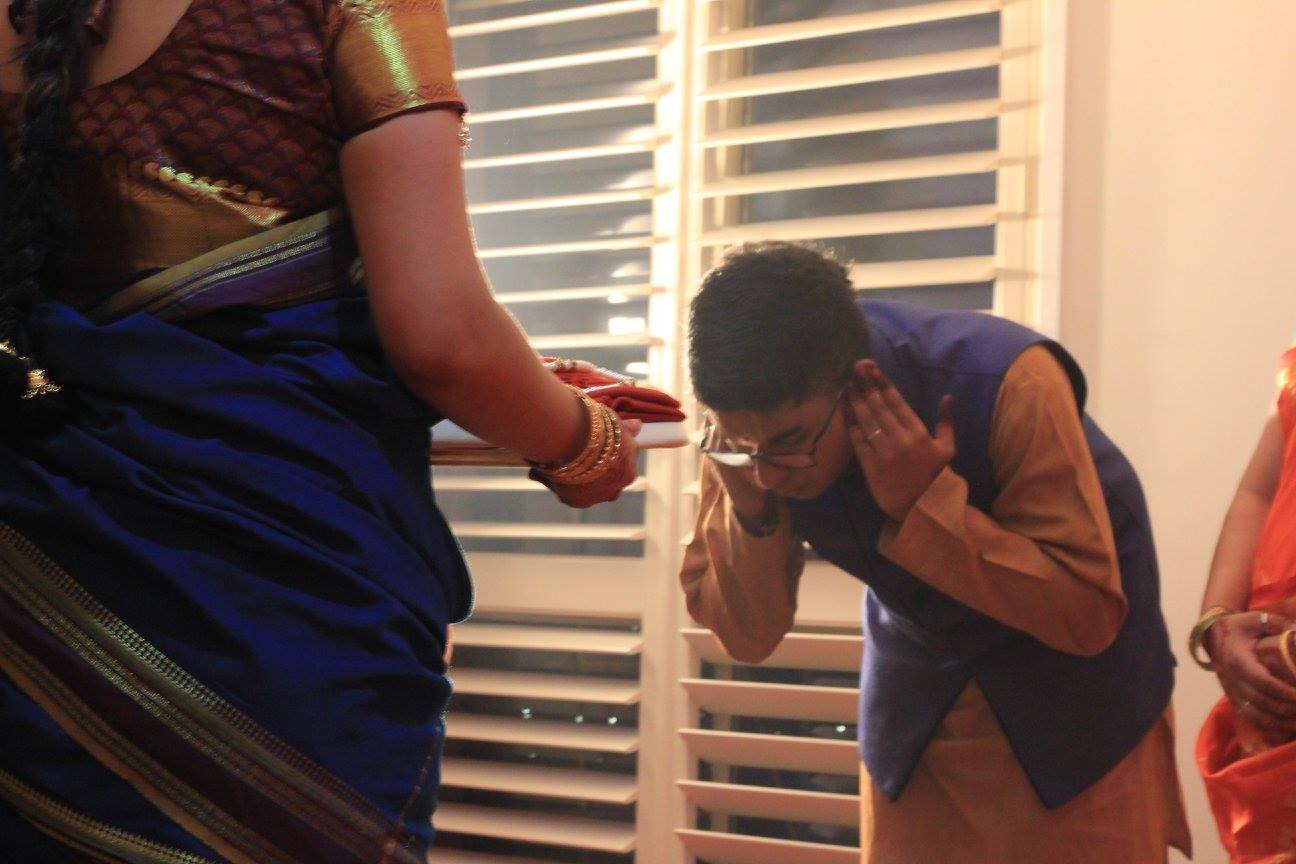 New clothes being given to Salaphaty as well 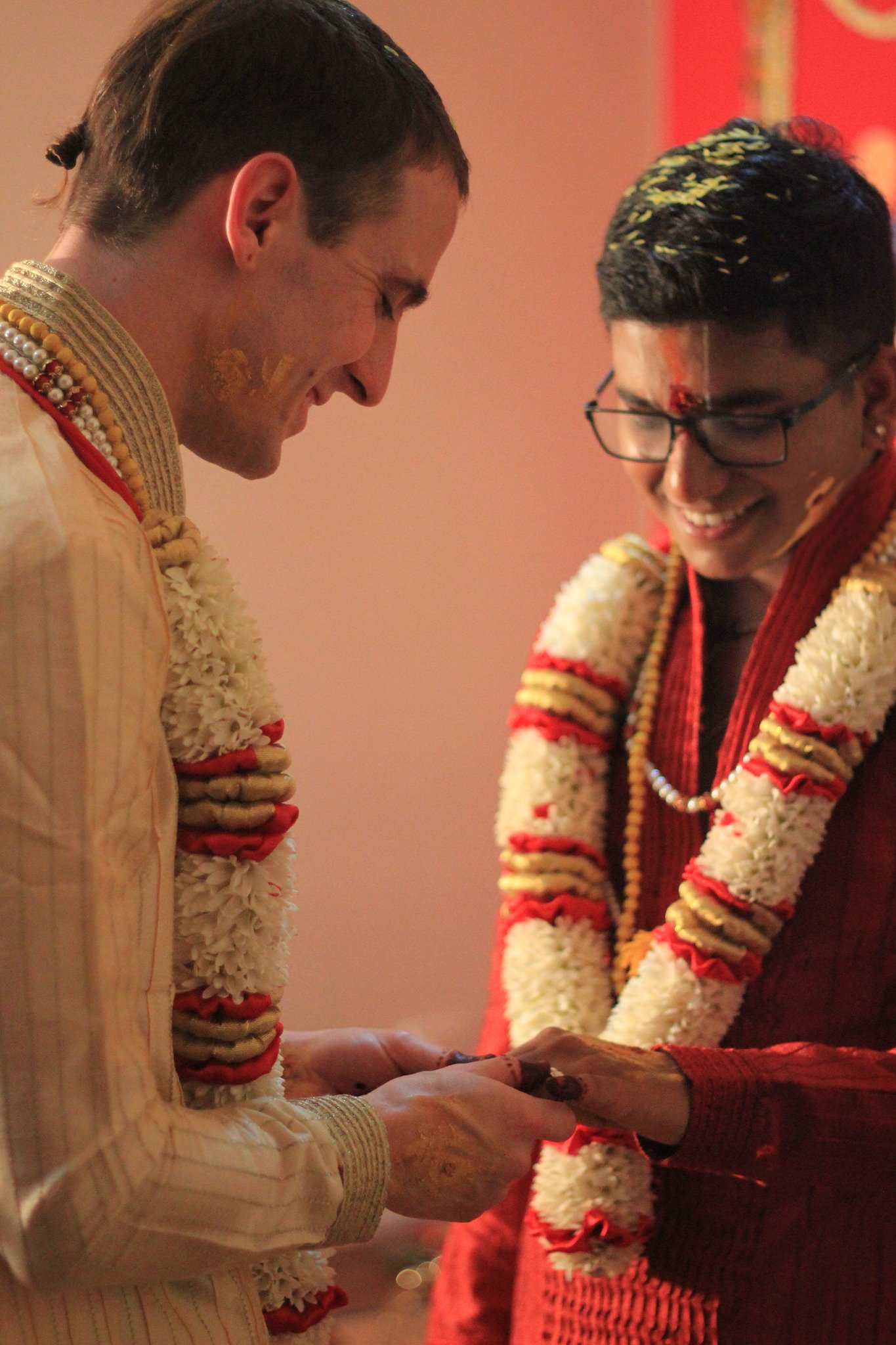 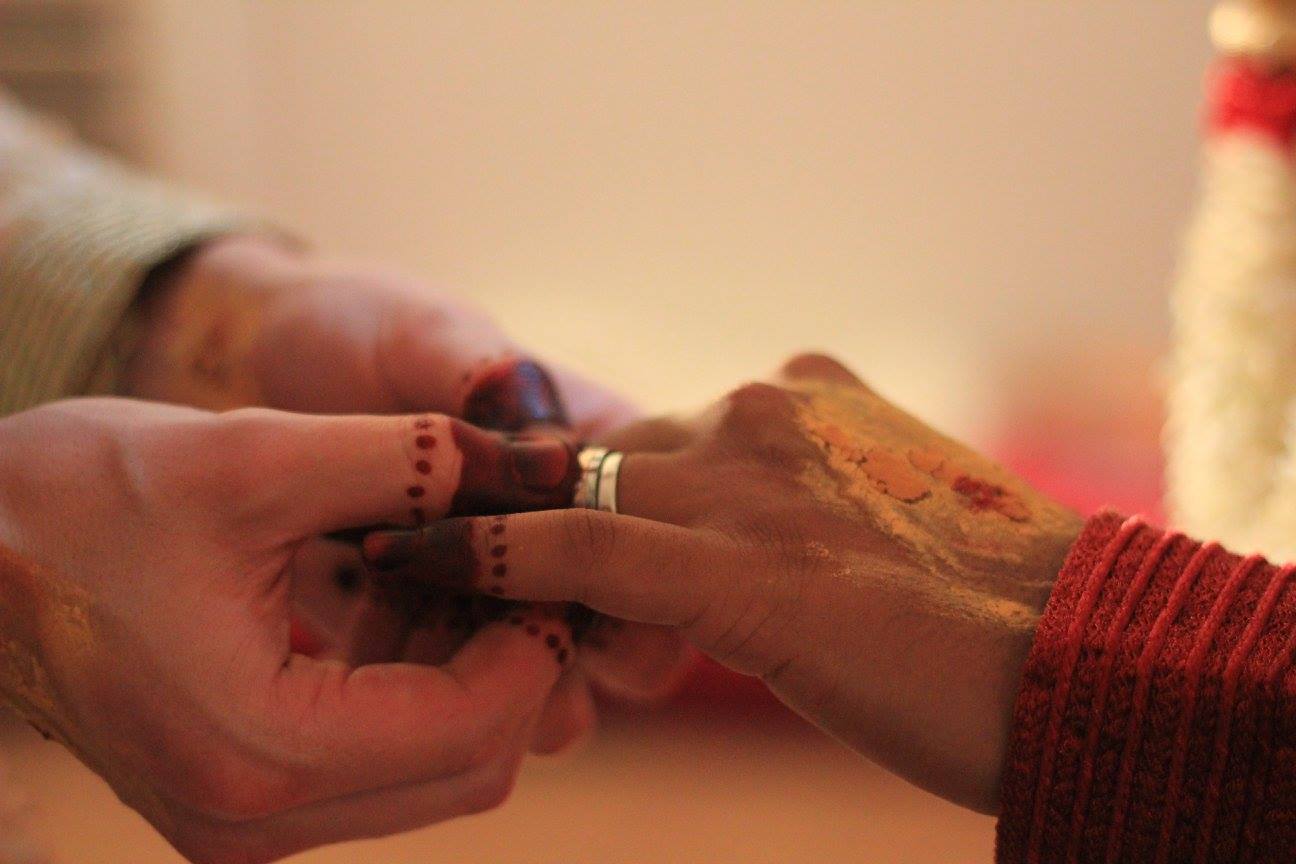 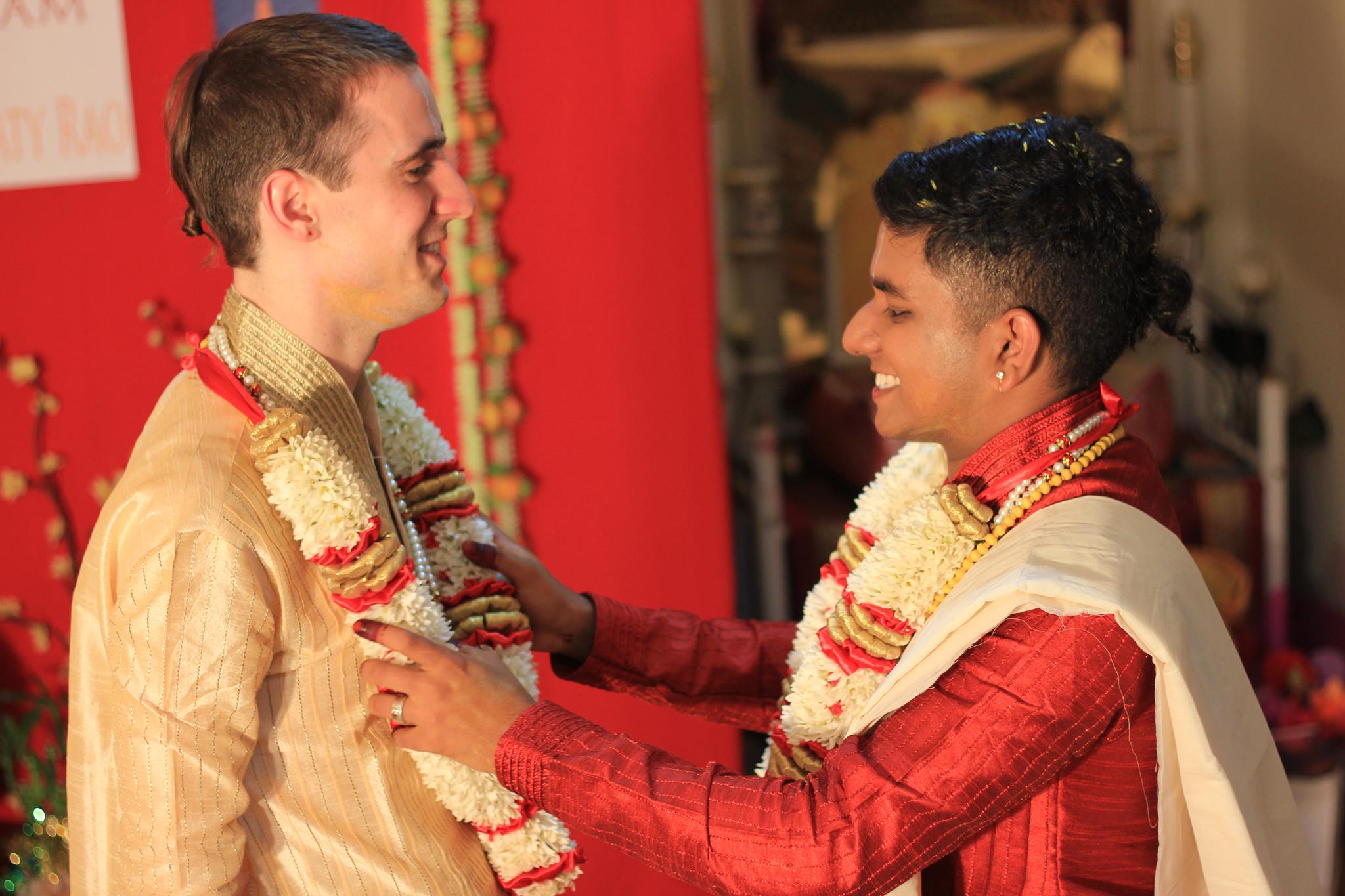 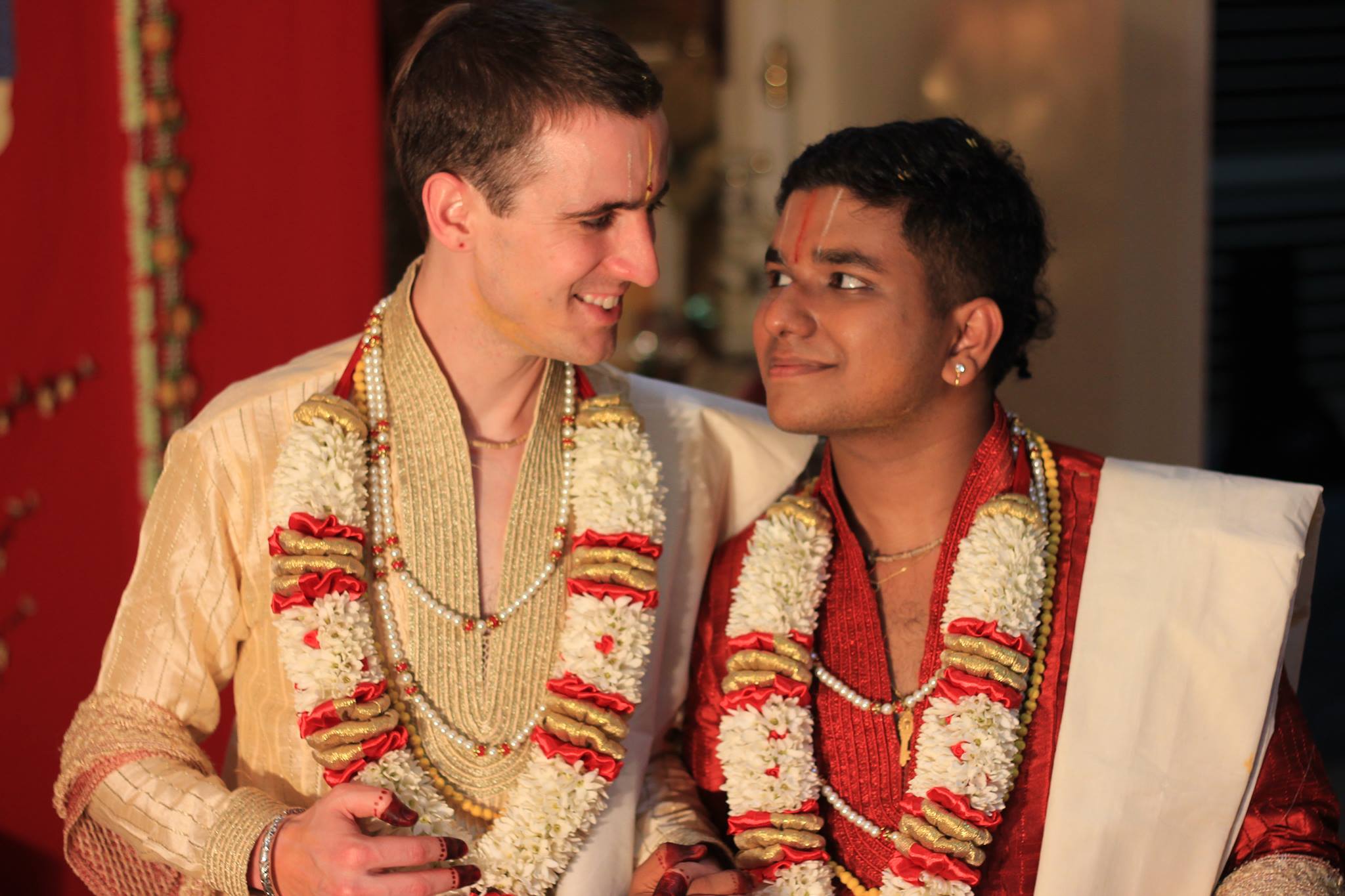