Broadening the Canvas of Culture and Sexuality

Kolkata:“You have to broaden the canvas,” quipped the Supreme Court some months back to those opposing the July 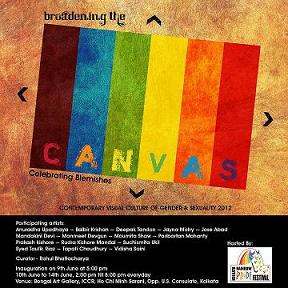 2, 2009 Delhi High Court ruling, which decriminalized same-sex sexual relations among consenting adults. The Supreme Court was hearing petitions against the widely acclaimed Delhi High Court ruling, which had read down Section 377, Indian Penal Code, a British era biased and homophobic statute. The ruling, opposed by religious and other conservative groups but supported by the Government of India, had come on the back of nearly a decade old public interest litigation pursued doggedly by sexual health and rights NGO Naz Foundation (India) Trust and other civil society agencies, including lesbian, gay, bisexual, transgender and other queer groups.

Inspired by this call for a new direction, queer collective Kolkata Rainbow Pride Festival (KRPF) is organizing an exhibition of paintings, photographs, posters, video art and pamphlets of NGOs working on gender and sexuality rights. ‘Broadening the Canvas ~ Celebrating Blemishes’ opens on June 9, Saturday, 5 pm. Fifteen artists from India and abroad, and NGOs from different parts of India will be part of this six-day exhibition at the Bengal Art Gallery, ICCR, Ho Chi Minh Sarani. The exhibition will be opened by contemporary dance exponent Sudarshan Chakravorty of Sapphire Creations Dance Workshop. Other eminent names from the city’s art and cultural milieu will also be present.

Curated by Delhi-based art historian and joint secretary of Performers Independent, Rahul Bhattacharya, the exhibition will showcase new directions in visualizing the body and sexuality. In the works of Balbir Krishan, Anuradha Upadhaya, Deepak Tandon, Jayna Mistry, Jose Abad, Mandakini Devi, Manmeet Devgun, Moumita Shaw, Paribartan Mohanty, Prakash Kishore, Rudra Kishore Mandal, Suchismita Ukil, Syed Taufik Riaz, Tapati Choudhury and Vidisha Saini, one will see a new cultural expression. Many of these artists are established, while some are considered to be the best emerging talent in Indian art. Many of the works will also be on sale.

“It is a ripe time to voice our concern and rebellion against narrow-minded oppressors. For instance, Balbir Krishan’s last solo show at the Delhi Kala Academy was vandalised by right wing activists opposing same sex love. It is time every thoughtful artist gets a chance to display their understanding of the gender and sexuality spectrum, in their own way, without the fear of censorship from those who want to epitomize heterosexuality as the one and only accepted colour,” believes the KRPF collective.

In Rahul Bhattacharya’s words, “The Delhi High Court ruling has undoubtedly opened up new horizons. However, along with the gay, lesbian, bisexual and transgender movements, one cannot ignore the impact of feminism in opening up our understanding of gender and body, and challenging the patriarchal heterosexual framework. Now there is a young generation of artists working with a new freedom for expressing body, gender and sexuality, and this is what ‘Broadening the Canvas’ focuses on.”

The exhibition will be part of KRPF’s 2012 season of “rainbow pride” activities, and will be followed by other events spread over a month. The culmination will be the 11th Rainbow Pride Walk, the oldest of its kind in India and South Asia, in mid July.

The KRPF, which promotes dignity and equality through solidarity, art and sexuality, is a one year old, non-profit collective of individuals, networks and organizations which hold that no individual, community or section of society should face stigma, discrimination or violence because of their gender and sexuality. KRPF deploys a variety of art forms, media and mass awareness activities to generate the dialogue necessary to achieve its objectives.