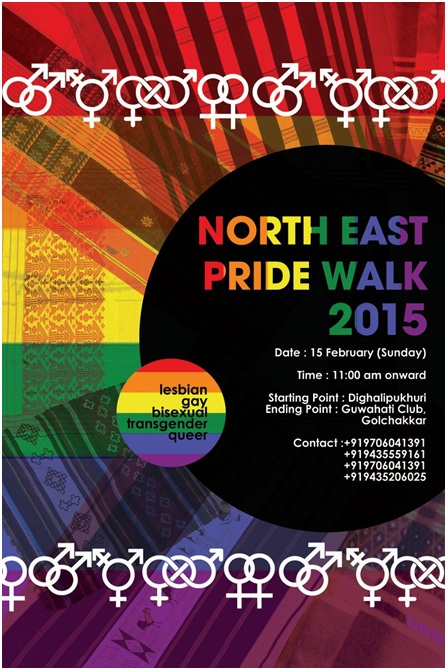 The Eight states of north east came together for the first time to organize the second LGBTQI pride parade in Guwahati, which is also the very first collective North East Pride, after last year’s Guwahati Pride followed by Manipur Pride. In a span of about one year since the region saw its first Pride walk, the movement has expanded in solidarity with other movements for peace and justice.

This year the Pride stood out for its inclusiveness and a collective effort in representation of states from across the northeast, its leadership by the youth and women and people from the community and allies. The Pride tried to raise its voice against normative structures and create an alternate paradigm and space for communities and groups that have historically been deprived and looked down upon. “We see this attempt as an effort towards solidarity of the LGBT movement with the other movements of the regions denouncing this hate and unending circle of violence in the northeast,” a press release by the organisers said.

The Pride walk started with an introduction of representatives from all the northeastern states, followed by poetry recitation, dance by queer groups, musical performances by a lesbian band-Sryngiew, from Meghalaya, dance by hijra community. The walk proceeded through the route from Dighalipukhuri-RBI Point- Food Villa Point- High Court- Latasil Point- Ambari- Guwahati Club Rotary. People carried slogans in regional languages of the northeast from Kokborok, Meitei, Khasi, Bodo, Mizo, Nepali, Nagamese to English and Hindi. Even the playlist to which people walked in pride, represented the blend of radical and powerful melodies from all across the region.

The Pride had participation and substantial support in comparison to last year. National queer rights activists from Kolkata, Delhi and Mumbai were also part of this year’s Pride Walk.