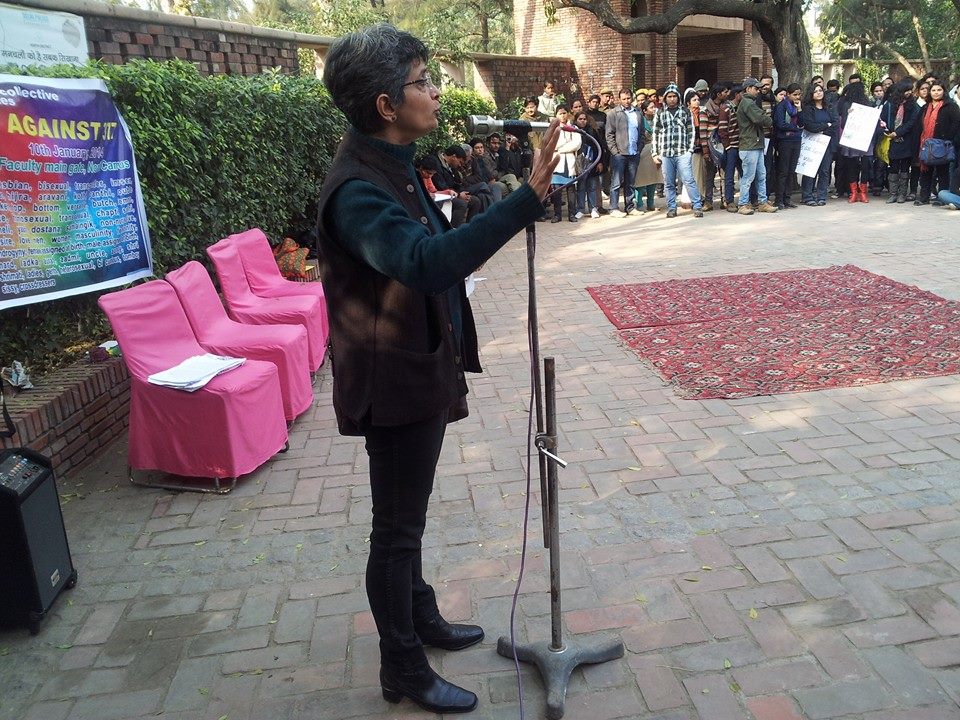 On Friday, January 10, 2014, a few hundred people gathered at the Arts Faculty North Campus, the hub of Delhi University, to protest against Supreme Court’s Judgement on Section 377. The event titled “DU AGAINST 377” was organized by students, research scholars and faculty of Delhi University (DU).

The event was attended by prominent people like Prof Nivedita Menon of JNU who is widely known for her works in gender, feminism, queer rights etc.; Kavita Krishnan, General Secretary, AIPWA (All India Progressive Women’s Association) and Polit Bureau member, CPI(ML); Prof Brinda Bose, a known name in the academic circuit; Vqueeram Aditya Sahai, a PhD scholar from DU; and Prof. Apooranand, Depatment of Hindi, DU among many others.

Nivedita gave a thought-provoking speech on gender, feminism and queerness. She said that gender is a construct and we are stuck in a society where gender is being given too much importance. Hence any deviation from it raises the question of being “unnatural”. But such categories are baseless.

Aditya Raj, a student of the National Law University, Delhi elaborated on the genesis of Section 377 in India which dates back to British Rule and Constitution. He also explained how Sec 377 is in itself denial of the very “right to dignity” which is a fundamental right accorded to India’s citizens by the Indian Constitution.

Vqueeram stole the show with his fierce and extremely radical commentaries on queer politics, DU politics and much more. He said that being queer is a political statement in itself and his being a leftist-feminist-queer is a threat to the patriarchal nation-state which is built on patriarchal marriages.