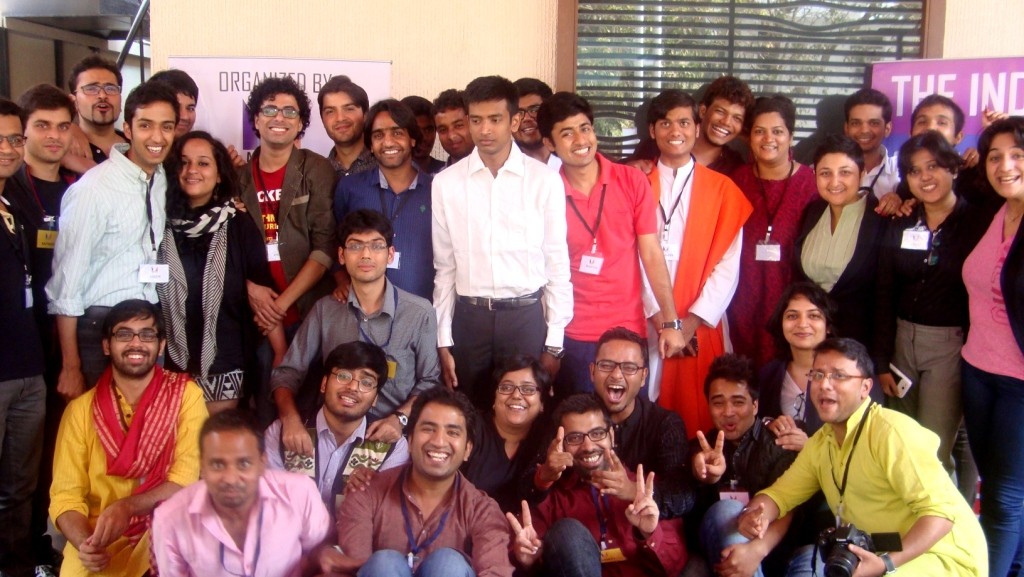 Participants and Volunteers at the 1st LGBT Leadership summit

The second edition of the Indian LGBT Youth Leadership Summit will be organized in Mumbai over two days- 14 and 15 March– by Mission for Indian Gay and Lesbian Empowerment (Mingle) in partnership with both international groups- Fondation de France (key sponsor), Rainbow Solidarite (LGBT Rights Group based in France)- and local community partners in Mumbai- Humsafar Trust, Pink Pages magazine, Gaysi and Gay Bombay. The summit will be hosted by the Godrej Industries group at its sprawling campus in Vikhroli, Mumbai.

The objective of the summit is to identify potential leaders among the LGBT Indian youth and groom them for future leadership roles. Held in the heart of India’s financial capital, the two day event will consist of interactive workshops, film screenings and panel discussions.

More than a hundred young LGBT people between the ages 21 and 32 had applied to attend, among whom 35 have been selected based on their leadership potential and willingness to engage on LGBT issues. The participants are a diverse group of men and women from various professional, educational and cultural backgrounds- coming from many Indian cities like Mumbai, Bangalore, Delhi, Hyderabad, Chennai, Kolkata and Indore among others. The theme for the summit this year will be- “LGBT Empowerment: Building Alliances Within and Beyond”

According to Udayan Dhar, Project Lead and Diversity Consultant at Mingle, “Last year’s summit, which was also held in Mumbai, received an overwhelmingly positive response and generated much enthusiasm, which propelled Mingle towards going ahead with the second edition this year. Our focus has been to invite the best and diverse talent from across India for this pioneering capability building program.”

Harish Iyer, member of Advisory Board of Mingle and prominent LGBT rights advocate said on the need to hold the summit, “The LGBT movement in India is going to be a long one and there is a need to build our capacities with younger, vocal minds taking the lead. This summit ignites the spark by getting young thriving members of the community to act as catalysts for change.”

Last year’s summit had several highlights such as a Session on Gender, Sex & Sexuality by Humsafar Trust, a Personal and Professional Leadership workshop ‘Living in Freedom & Awareness’ conducted by Kiran Gulrajani, Founder of ‘Co-evolve’, documentary screening of ‘Outlist 2013’ that deals with the issue of Coming out, a talk by Artist and TED fellow Sharmistha Ray, a Workshop on Legal issues for LGBT Indians by Vijay Hiremath, a talk by Parmesh Shahahi- head of Godrej India Culture Lab which dealt with Leadership in the Corporate World and a Panel Discussion on the theme ‘Role of Today’s LGBT Youth in Building tomorrow’s India’. The panelists were Harshita Gandhi (founder of Queer Ink), Harish Iyer (Noted activist and blogger), Sridhar Rangayan (Organizer of the Mumbai international queer film festival) and Parmesh Shahani.