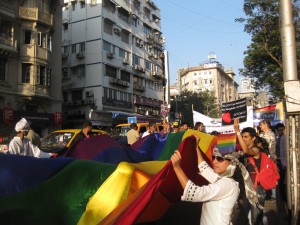 Sukhdeep Singh reports on the activities held for Mumbai pride

This was the mantra this year during Mumbai Pride or Queer Azaadi March, and it was even reflected during the actual pride march, where only a handful of people chose to hide behind a mask. Like last year, QAM this year too was a week-long celebration that began on 21st January with a photography exhibition. QAM 2012 also put up Mumbai on the world map of cities to have witnessed gay flash mobs. Around 50 odd people suddenly started dancing to a medley of songs at Marine Drive on 24th Jan, taking the crowd there by surprise and giving Mumbai the distinction of holding Asia’s first gay flash mob.

Bollywood actors Imran Khan and Hrithik Roshan extended their support each, the former by turning up at one of the events ‘Dirty Talk’ and interacting with the audience there, while the latter held a special screening of his upcoming movie Agneepath for members of the queer community. A rock concert was held a day before the pride where which various bands and musicians charted out foot-tapping numbers, enthralling the huge crowd that had gathered at the venue. Even as the rock concert went on, posters for the pride march were being made by people, and many friendly and curious by-standers also joined in to help.

On January 28th, a stage outside of August Kranti Maidan greeted those who had gathered there, and Harrish Iyer could be seen holding a mike and shouting, “I am Gay”, with the crowd shouting back at him, “It’s OK”. Chitra Palekar also went up on stage wearing a placard that read, “Mother with Pride”. The march began after more than an hours delay from the scheduled time. The only bollywood personality that could be seen in this year’s pride was film director Onir, who was walking his first pride in the city. However, what didn’t go unnoticed was how only very few people could be seen wearing a mask. Even those who had a mask initially later chose to take it off completely, or wear it only when encountering a media person. When asked as to why he was holding the mask in his hand and not wearing it, Harshit Meena, a young college student had this to say: “Due to the narrow mindset of the society, gays feel embarrassed to come out. I had a mask but am not wearing it to show that I am open for any sort of comment from the society, good or bad because at the end I can’t change myself. I am Gay and I am proud of it.”

The march ended at Chowpathy in the evening, with a post-pride party planned for the night. The message that was given out was loud and clear, “We are queer, and we are here”.