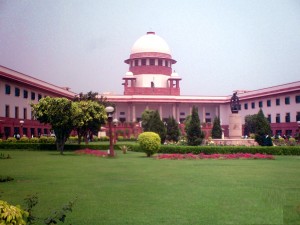 The historic July 2, 2009 verdict of the Delhi High Court, decriminalising homosexuality, came up for hearing in the Supreme Court last month, after being challenged by various religious bodies in the apex court. The hearing has been making headlines in the mainstream media from day one, thanks to the various goof-ups made by the government of India as well as because of the homophobic utterances of Govt. counsel and the petitioners.

To begin with, the Ministry of Home Affairs (MHA) put its foot in the mouth over their position on Section 377. Speaking on behalf of the MHA, the Additional Solicitor General, Mr P P Malhotra reiterated the stand (which called homosexuality immoral and against the order of Nature) that MHA had taken in the Delhi High Court. The comments drew flak from all quarters, in mainstream media and social media. The MHA was quick to do a volte-face and distance itself from the ASG’s affidavit. On the next day, the govt counsel clarified in the court that while the govt had no legal problems with decriminalising homosexuality, they have no stand on “homosexuality” per se.

The government also earned the ire of the apex court bench for “making a mockery” of the system by continuously shifting its position on the issue at hand and digressing from the core issue of IPC 377, and focussing on the prevalence of HIV among homosexuals. The government put across the view that homosexuals formed a large risk group for the spread of the HIV. The Supreme Court reprimanded the Govt. for the lack of fresh data and asked them to present a detailed account of how many HIV patients are there in India at present and how many of them belong to the LGBT community.

The opposition of the religious groups to decriminalising homosexuality is not something new for the LGBT community. The arguments made by Muslim Personal Law Board hovered around morality, procreation and order of nature as usual. The famed advocate Mr Fali Nariman, who appeared on behalf of the parents of homosexual kids, took on such opposition head on and questioned the definition of “natural”. He pondered why laws made in 21st century should tether to the moralities and social structures of medieval era.

The Supreme Court is treating this issue with utmost gravity and has been hearing the case every day. Not only are they grilling every petitioner with questions delving into great depths of the subject, but questioning every proposition made in the courtroom to understand the rationale behind a stand. Widening the scope of jurisprudence to contemporary societies across the world, and taking into account various legislations on homosexuality made in different nations in recent past, the Supreme Court has kindled hopes in many hearts across the nation.

From what can be perceived, it seems the hearings would go on and it would be a while before any verdict is given out. Till then all eyes will be on Justice G S Singhvi and Justice J S Mukhopadhyay.