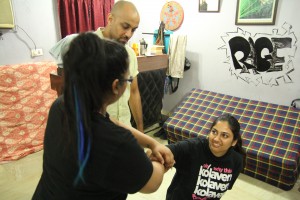 On May 1st, ILS Adventure partnered with the NGO Elaan to hold a free self defence workshop at their upcoming studio in Salt Lake City, Calcutta. We caught up with Dave Chakrabarti, one of the instructors, to get more information about the Shield project.

Gaylaxy:  Tell us about your plans for these workshops. How did they start?

Dave: The idea behind the Shield workshops is to cover the fundamentals of self defence training for real-life situations, and to teach techniques that are effective without having to put in years of practice. I’ve had friends asking me to teach self defence classes every time I’ve visited Calcutta, for several years now. Kaustav Majumdar, my co-instructor and the CEO of the ILS Network, has had the same experience. We were already developing a Shield program that combined self defence training with adventure sports, so it wasn’t that hard to extend that into a regular series of free weekend workshops in the city.

Gaylaxy: Is there really a need for self defence training in Bengal?

Gaylaxy: What style of martial arts is this?

Dave: Like most self defence workshops abroad, we’re teaching techniques that are more similar to mixed martial arts than any particular style; we take and adapt techniques from several martial arts styles. So a participant might be using a muay thai technique from Thailand to block an attack, a judo or aikido technique from Japan to break their fall safely when a bigger, stronger attacker forces them to the ground, and a Brazilian jiu-jitsu joint lock or choke to defend themselves on the ground. This is very different from the karate class you probably took as a kid.

Gaylaxy: Can you expand on that a little more? What’s the difference between what you guys are doing and a karate or tae kwon do class, and why are styles like “muay thai” better?

Dave: I hate these inevitable “My fighting style is better than your fighting style!” comparisons. It’s immature. Fighting styles are different; you have to understand what they emphasize and what they’re good at. I know a lot of muay thai students who cross-train in tae kwon do to improve their kicking power, delivery, and form. You have to take what’s effective from each style you train in, and understand where their weaknesses are. A smaller man who trains purely in tae kwon do, for example, will be at a huge disadvantage if he’s taken to the ground by a larger, stronger attacker (and 95% of all street fights end on the ground!). If I had to characterize the differences in what we’re doing, I’d say that we’re completely focused on self defence (no belts, no bowing, no traditional forms or movements), and that training is very realistic. Participants will be actively practicing techniques against a several large, strong, resisting opponents in every class. We also cover things like situational awareness and how defending yourself from a rape is different from defending yourself in a bar fight; things that aren’t usually taught in martial arts classes. Lastly, our participants learn to 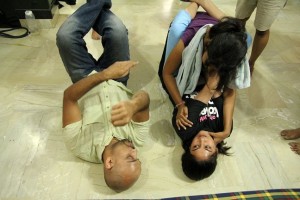 use everything as a weapon, including their attacker’s shirt collar or their car keys.

Gaylaxy: Who are the instructors for this workshop, and what’s your background in martial arts?

Dave: Right now, Kaustav Majumdar and I are teaching, but we’d love to get more folks involved. This is especially true if any of your readers has experience with filipino fighting styles; that’s a gap in our current curriculum since we haven’t found any qualified instructors (or serious students) in India. My background is a mixture of judo and brazilian jiu-jitsu, though I’ve also trained in tae kwon do, hapkido, and a couple of other things. Kaustav da has years of training in aikido. Both of us have taught co-ed and women’s-only self defence classes abroad.

Gaylaxy: Who are the participants, and what has the response been like?

Dave: While I won’t profile specific participants, I can tell you that we’ve had a mix of women and gay men at both workshops, with straight men being in the minority. Early feedback has been very good. Classes are fun! Participants asked for more hands-on training time, which we’re planning to add as soon as we get some foam pads so we can train on the ground safely. Several of the smaller girls have been hesitant, but after a couple of classes they’re learning that even the tiniest of them can defend themselves against bigger, stronger attackers with the right training. I think we’re on the right track.

Gaylaxy: What’s next for Shield?

Dave: Tons! Given how much interest we’re seeing, we’re planning to scale the program to include other NGO partners. We’d love to work with SAATHI, for example, and I was introduced to one of their founders at a wedding recently. There’s a strong interest in making Shield available in schools and colleges, so an invitation-only pilot project with a couple of colleges is on the cards. We’re also finalizing the logistics for Calcutta’s first self-defence studio, where we’ll be able to do regular self defence classes and eventually add a strength training and conditioning component. And lastly, I may be training and fighting in Thailand later this year, so we’re exploring ways in which we might partner with other instructors and organizations.

Gaylaxy: How can readers get in touch with you?

Dave: The easiest way is through the ilsadventure.org website, where we have phone numbers listed. We’ll also be posting blog posts and pictures from self defense workshops and other events there. Thanks!