(Photo by: The NLS Darkroom Diaries)

Since the shameful verdict of the Supreme Court (SC) on 11.12.13, upholding the constitutional validity of Section 377, the media has gone into a tizzy, and rightly so. If not rights, the least we can provide every citizen is a voice. This is my humble attempt to that end. I would like to make it very clear that this rant is not directed against the Honourable SC or the learned judges of the SC, but solely against the judgment pronounced by the two judge bench on Koushal and others v. Naz Foundation.

Simply put, it violates our fundamental rights and goes against the constitution’s promise of equality to every citizen by relegating certain sections of society into secondary citizen status. To this end, it is unconstitutional.

We have the so called, self-appointed custodians of ‘Hindu culture’ supporting this inhuman judgement. People like Baba Ramdev and organisations like BJP couldn’t be further from reality.

Where has all this left us? Orphaned of our originally tolerant religious stance, we now follow the Victorian lunacy of our colonial rulers, who themselves have snapped out of it. We are being told by ‘religious leaders’ that we must continue with the colonial legacy in the name of preserving our ancient culture (which was originally tolerant). I hope the irony is not lost on you.

My personal view is that, what a person does in her own privacy is none of the state’s business. I’m quite liberal in giving people the freedom they deserve. As long it does not hurt anybody and is consensual, I’m cool with it.

If he/she is gay, what’s your problem? Think about the answer to that question with a clear mind and try coming up with an honest answer. It’ll surely be a baseless, self-created ‘problem’ in your own mind probably with the help of some external brain washing. Problems like ‘what would society say?’ and ‘religious issues’ are just that. If you’re homophobic on the other hand, I’m sorry to break it to you, but you have an actual mental condition and need medical help!

The bigots ask, “Homosexuality today, bestiality tomorrow? Incest tomorrow?” Firstly, you got to have a really sick mind to come up with such a progression of acts. They are beyond comparison! Nevertheless, here are my views on the topics. Let me make it amply clear that I’m not comparing them with homosexuality in any way. Bestiality is completely out of the question as there is no way of getting the animal’s consent, so it violates animal rights. So no, no bestiality ever. As for incest -no matter how disgusting I find it personally- I feel that as long as all the parties are above 18 and it is consensual, it is none of our business. It is our duty to educate them about the risks, like conceiving deformed babies, etc. If they still decide to proceed in spite of that knowledge and say, use contraceptives, we are nobody to stop them. If there is any threat, blackmail, coercion or paedophilia of any sort involved, the law needs to step in. I understand that such policy is extremely hard to implement, but that doesn’t mean it can’t or shouldn’t be. One human does not have the right to judge another, based on what he ‘thinks’ is right or wrong. In what way can we claim moral superiority over them? The fact that it is wrong needs to be proved beyond any reasonable doubt. Only then should it become law.

Homosexuality is as natural as heterosexuality and it should not be viewed as a perversion of some sort. If you are naturally attracted to the opposite sex, they are naturally attracted to the same sex and vice versa. As simple as that. It just cannot be helped and any attempts by others to suppress it is a form of torture. It’s akin to forcing a straight person into homosexuality. So, parents who force their homosexual children into heterosexuality are doing the most cruel thing to their own children.

To those who claim that homosexuality is against the concept of evolution, here’s something to think about. Due to non-stop heterosexuality-caused reproduction, our population grows and grows. For how long can our environs sustain it? Beyond a certain point, our population should not grow so fast in order to avoid the eventual over-population. What if homosexual behaviour is a kind of evolutionary tactic for natural population control?

To my homosexual friends, both out of the closet and in, I would like to ask you to not lose heart. Even though it is going to take some time, this judgement is eventually going to find its rightful place in the dustbin of bad judgements. After gaining initial brownie points, the Congress has said it won’t introduce an ordinance ‘now’ due to political reasons. Truth be told, no political party really gives a shit, it’s not there on any of their manifestoes, never was and chances are quite strong that it never will be. That only leaves the option of appealing the decision in a court, which is comparatively time consuming but has a very realistic chance of success as I have faith that the SC will entrust a larger bench and won’t repeat the same injustice next time. Once bitten, twice shy. In the meantime, don’t lose heart and do strive for happiness, in whatever way. Lead a normal life because you’re as normal as normal can be. Don’t let stigma, violence and discrimination break you. Don’t succumb to pressure from your parents to marry. I am aware that this is easier said than done. I want to give you courage and confidence that our society and law will evolve for sure and in quick time. You have a lot of support from a huge section of liberal people who belong to the 21st century in mind and spirit and we stand with you against this illogical tyranny. We are one and we shall overcome.

(Disclaimer: The opinions expressed within this article are the personal opinions of the author and do not reflect the views of Gaylaxy and Gaylaxy does not assume any responsibility or liability for the same.) 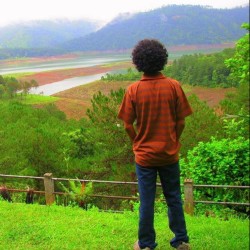 Tarunay Roy
An engineer by qualification, a keen observer and blogger by passion